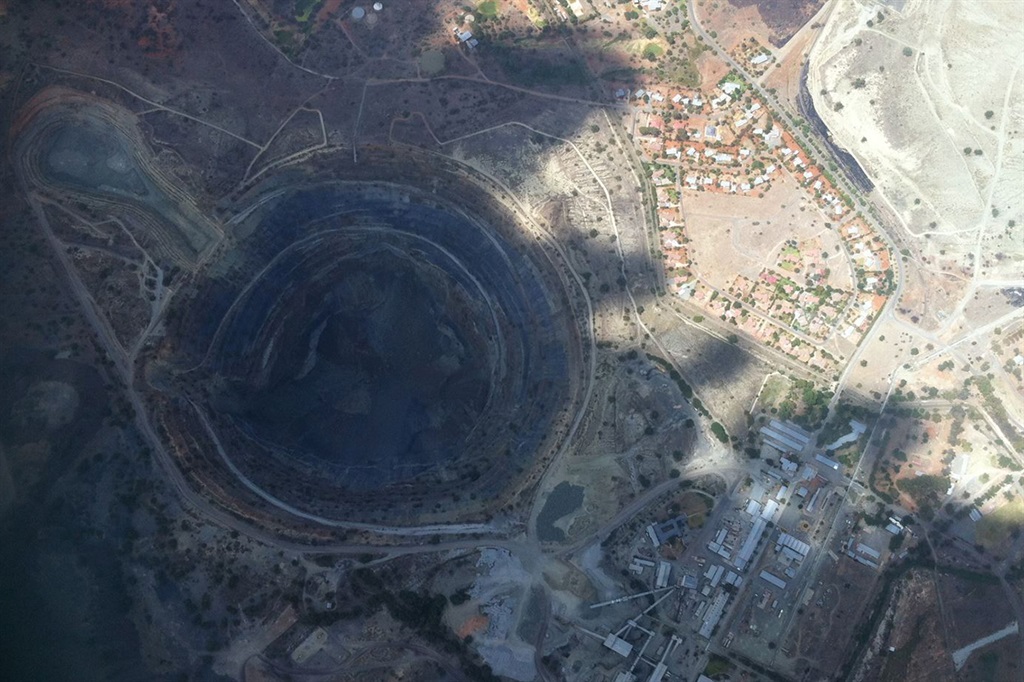 Koffiefontein mine in the Free State (Image: Wikimedia Commons)

The Free State's historic Koffiefontein diamond mine could soon have a new owner, who, in addition to extracting valuable gemstones from the ground, will be responsible for relocating hundreds of skeletons from unmarked graves.

Petra Diamonds recently announced that it's "exploring a responsible exit from its investment in the Koffiefontein diamond mining operations in South Africa." The major diamond producer operates three underground mines in the country – Finsch, Cullinan, and Koffiefontein – and is responsible for some of the biggest finds over the past decade.

While Petra has found success in Cullinan – selling more than two million carats worth of diamonds in 2021 – its Koffiefontein operations have been troubled. The mine, acquired from De Beers in 2007, netted sales of just 66,650 carats and made an operating loss of around $10 million, according to Petra's 2021 financial reports.

The diamond producer blames this most recent drop in production on a "high level of rainfall" – though labour disputes, power interruptions, and high operating costs have marred the mine – and has hoped to turn things around by introducing a business re-engineering project.

But in its most recent update, published on 26 April, Petra announced that it had embarked on a disposal process that will run concurrently with retrenchments.

"Given the gross resource base of 5.25 million carats as at 30 June 2021, including 1.11 million carats in the indicated resource category associated with underground resources, it may be feasible for another owner to extend the mine's life," Petra Diamonds, which has a current mine plan to 2025, said in a statement.

"The focus of this disposal process will be to identify a technically and financially suitable buyer that could potentially unlock further value from Koffiefontein."

Koffiefontein, located roughly 80km from Kimberley, is one of South Africa's oldest diamond mines, with the first discovery in 1870. The number of claims grew rapidly, and by 1893 Koffyfontein Mines Ltd, the largest company mining the kimberlite pipe at the time had hired more than 1,000 workers.

Conditions in the compound housing these migrant workers were, like many mining sites at the time, abhorrent. Unsanitary and cramped living conditions, coupled with limited access to medicine and an ill-equipped mining hospital, led to disaster near the end of the 19th century.

A typhoid epidemic swept through Koffiefontein in 1896. Hundreds of miners fell ill, and many died.

The true scale of this disaster was only partially uncovered more than a century later when, in 2002, three skeletons were unearthed during bulldozing operations near the mine dump.

According to the Act, no grave older than 60 years situated outside a formal graveyard may be disturbed or removed unless a permit has been granted by SAHRA.

"The skeletons seemed to have been buried in an informal graveyard, of which only a part was excavated," noted Henderson. Evidence showed that the bodies were buried in a hurry as the typhoid epidemic quickly overwhelmed the mine.

"The rest of the graveyard was not excavated, and the decision was taken to leave it undisturbed by further mining operations."

The removal permit lapsed, and the area surrounding where the remains were found has remained off-limits for the past two decades.

That is until recently when Blue Diamond Mines (Pty) – a division of Petra Diamonds operating Koffiefontein – hired G&A Heritage Properties to reapply for a permit to exhume and relocate the remains.

"As a result of pressure from the local community towards the mine to relocate the unknown graves to a formal cemetery, this process has been initiated," notes the motivation for the permit submitted to SAHRA in 2019.

"The mine is proposing to re-mine the tailings areas where many of these graves are located. It is believed that there are more than 500 dispersed graves, some inside various Tailing Storage Facilities and date back to the 1880-90s."

Blue Diamond Mines has since been awarded a permit to exhume all graves on the mining right area and relocate the remains to the municipal cemetery.

"Authorisation has been received to construct a mausoleum where the remains will be moved to," Petra Diamonds told Business Insider SA.

"There will be numerous exhumation phases during [financial year] 2023, with the first set to start in June 2022. During the exhumation process, two leading South African universities will be involved to assist and also do scientific research that can lead to publications."

But Petra's exit puts the responsibility of this costly and complex relocation project on the shoulders of the new owner.

"Any obligation imposed through the authorisation obtained would be required to be implemented by the new owner," the diamond producer said.

"Currently, the project is budgeted for the removal and relocation of 100 graves for the FY2022 and FY2023 budgets. This process with the construction of the mausoleum has been budgeted for R3.08 million."

Petra Diamonds has enlisted Questco Corporate Advisory to manage the disposal of its stake in Koffiefontein on its behalf. Parties interested in "participating in the disposal process" have until 9 May to register their interest with Questco.