First National Bank is adding seven new branches to its existing network of 619, it announced this week.

It has also started revamping 29 branches – and three of those are within walking distance of places where Standard Bank closed down branches as part of a big rationalisation, in Bultfontein in the Free State, Grassy Park on the Cape Flats, as well as in Daveyton on Johannesburg's East Rand – where the banks shared space in the same mall. 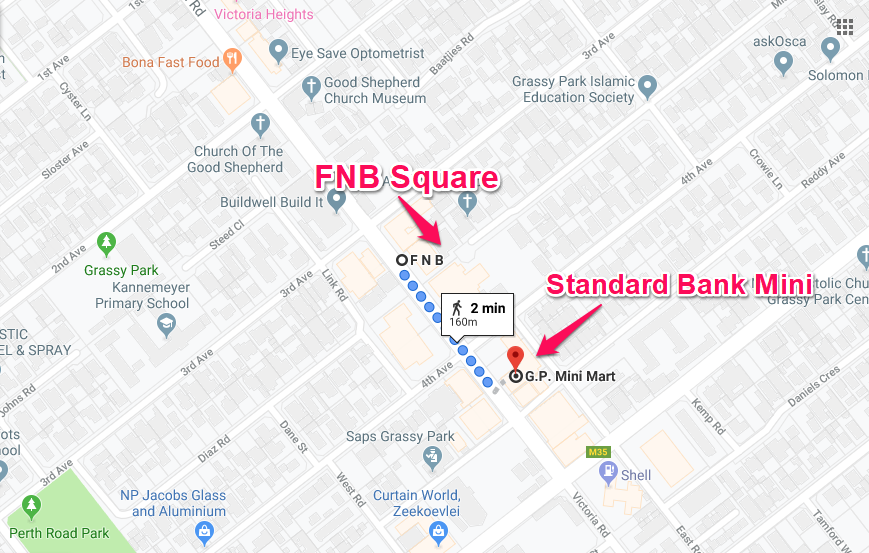 The FNB in Grassy Park is getting a revamp. It is easy walking distance from a closed Standard Bank Mini. (Google Maps/Bombi Mavundza/Business Insider South Africa)

Nedbank too has been shrinking its physical footprint, in part by closing branches and in part by using less floorspace where it keeps branches.

Earlier this month the labour court stopped a planned mass strike by the banking union Sasbo to protest branch closures and retrenchments in the sector.

First National Bank said it plans to open additional branches in the Eastern Cape, Mpumalanga, Limpopo, Gauteng,and the Western Cape before the end of its financial year.

See also: A 260km trip to the bank: here’s how hard Standard Bank’s branch closures will hit the Northern Cape, Free State, and other provinces In Bultfontein in the Free State, First National Bank is revamping a branch two blocks away from a Standard Bank branch that was part of its rationalisation. (Google Maps/Bombi Mavundza/Business Insider South)

"In our efforts to grow our presence and infrastructure, we are cognisant of the of the prevailing tough economic conditions that various businesses and consumers are faced with," said Van Zyl.

"In an event where some customers still prefer human interaction, our consultants will play an important role in ensuring that the best customer experience is maintained," she says.

The new branches will be opened at Mount Fletcher Shopping Center and Kirkwood in the Eastern Cape. In Gauteng new branches are due at Westgate Mall, the newly built Tembisa Mall in the East Rand, and at the University of South Africa (Unisa). Dwarsloop Mall as well as Tonga Mall, both in Mpumalanga, will also be getting new branches.

A branch in Sandton, Johannesburg, has also been recently opened.

The bank's 29 branches to be revamped are: