Getting lost, navigating language barriers, and spending too much of a foreign currency are part of the experience of being a tourist. But making a major mistake while flying can have consequences for everyone on board.

First-time flyers, superstitious travellers, and passengers who have simply reached the end of their rope have caused everything from flight delays to cancellations.

Here are 13 times that passengers have reportedly caused trouble.

A woman was arrested after she allegedly attempted to open a plane door on a Delta flight from Indianapolis to Detroit.

The Detroit News reported that a woman on a Delta flight from Indianapolis to Detroit allegedly tried to open a plane door while it was in the air and was stopped by other passengers.

The FBI is investigating, but Wayne County Airport Authority said in a statement to the Detroit News that the woman may have been experiencing a medical issue and that there was no criminal intent.

An Air France passenger took to Twitter after she said that a man on her flight removed his pants and socks while mid-air.

According to tweets from Air France passenger Lizzie Thompson, a man on a flight from Paris to Los Angeles allegedly removed his pants in a bathroom before takeoff, and later removed his shoes and socks. Thompson said that the passenger was sitting in the seat across from her and spent the remainder of the flight in his boxers.

According to her tweets, Thompson eventually alerted a flight attendant about the pants-less man, and the employee offered to move her seat. She said that she didn't want to lose the bulkhead legroom she had, and therefore asked the attendant if he could ask the man to put his pants back on. According to Thompson, the flight attendant "just shrugged."

In a statement sent to INSIDER, a representative for Air France confirmed that the man boarded Thompson's flight.

"Air France regrets the customer's feelings and confirms that the passenger boarded in shorts and sandals," a representative for Air France told INSIDER.

The representative also said that its crew handled the alleged situation according to protocol.

"The company reminds us that it is not the responsibility of cabin crew to require customers to wear acceptable clothing, except of course in the event of indecent dress," the Air France representative said. "Having solicited the crew whose role is to ensure the comfort and well-being of the passengers, the customer was offered another seat of the same type and with the same comfort that she refused."

A woman was reportedly kicked off a United Airlines flight after complaining about sitting between "two big pigs". A video filmed by passenger Norma Rodgers appears to show a woman ranting about her seat on a flight from Las Vegas, Nevada, to Newark, New Jersey, and calling the passengers on either side of her "two big pigs".

"I don't know how I'm going to do this for the next four hours," the woman said to someone on the phone, sitting between Rodgers and another man. "This is just impossible, they're squishing me, it's unbelievable."

She then said "At least they'll keep me warm."

Rodgers then called a flight attendant to ask them to reseat the woman, saying she would not be "verbally abused by anybody."

When a flight attendant told the woman to wait in the back of the plane for another available seat, she said "Thank goodness, because I eat salad, okay?"

Another passenger can be heard in the video telling her that the way she was acting was "terrible".

"I'm not going to be politically correct. Why don't you sit between those two big pigs?" she said.

United Airlines staff eventually escorted the woman off the plane.

"United flight attendants care about the safety and well being of all of our customers which is why they acted quickly to find a different seat for the disruptive customer," a United spokesman told The Independent. "When it became clear that this passenger's behavior was likely to be problematic on this flight, she was provided alternate travel arrangements first thing the next morning."

A passenger tried to open an emergency exit on an American Airlines flight while it was mid-air, but a celebrity came to the rescue. Actor Michael Rapaport was on a flight from Houston to Los Angeles when he said he saw a man with both hands on the lever of the emergency exit door, trying to open it.

The flight attendants were gathered at the back of the plane, so Rapaport ran to the man and pinned him against a seat until the crew could restrain him.

When interviewed by authorities when the plane landed, the man said he thought it was the bathroom door, according to Fox News. A source told the outlet that the man was "really confused and made an honest mistake."

A video appears to show a woman slapping a gate agent at Wuhan Tianhe International Airport when she missed her flight. In a video shared by China Global Television Network in 2017, a woman appears to slap a gate agent at Wuhan Tianhe International Airport.

According to the report, the passenger in question arrived at the airport for her flight to Paris 14 minutes after the gate had closed. When she was told that she had arrived too late, the woman allegedly hit the gate agent in the face three times.

The South China Morning Post reported that the woman was a 36-year-old PhD student in Wuhan that was on her way to an "important conference."

She was detained for 10 days, according to The Daily Mail.

A 76-year-old woman allegedly threw coins into the engine of a Lucky Air flight for good luck. Channel News Asia reported that a Lucky Air flight was held overnight after a 76-year-old woman threw coins into the engine of the plane for good luck.

The flight was supposed to fly from Anqing to Kunming in southwestern China on October 19, 2017, but when passengers noticed the woman tossing coins into the plane's engine, they alerted crew members onboard. Crew members on the ground then found coins on the tarmac next to the plane, and the flight was rescheduled for the next day due to safety precautions.

The woman was taken into custody. It was unclear if she would face charges, but an 80-year-old woman who did the same thing in 2016 was let off the hook due to her age.

An AirAsia flight to China returned to Bangkok when a woman reportedly threw scalding hot instant noodles in a flight attendant's face. According to a statement provided to Reuters, an AirAsia flight had to turn around and head back to Bangkok when a passenger allegedly scalded a flight attendant with instant noodles.

The dispute reportedly started when a woman and her boyfriend realized they were seated separately. The Washington Post reported that they were traveling with a large group and the seats had been arranged in alphabetical order. Crew members eventually found them seats together. But when the woman asked for hot water for instant noodles she'd purchased on the plane, she allegedly threw them at a flight attendant's face.

The flight attendant received first aid while the plane changed course. Upon arriving back in Bangkok, the woman and three other people were escorted off the plane by police, but reached an "amicable conclusion" without criminal charges.

A tourist fell asleep on a luggage carousel at Rome's Fiumicino Airport and went through the X-ray scanner. In 2012, an unnamed 36-year-old man reportedly climbed over a check-in desk at Rome's Fiumicino Airport and fell asleep on the conveyor belt of a luggage carousel, according to the BBC.

He was discovered when airport staff saw the outline of a person in the X-ray scanner, and appeared drunk when questioned. The man was taken to the hospital by police officers who were concerned about his exposure to X-rays, and later faced criminal charges, The Daily Mail reported.

A man on a China Southern Airlines flight reportedly said, "The door is not important" when he opened it before takeoff in 2015 and delayed the flight for an hour.

In a statement to the South China Morning Post, China Southern Airlines said that a man opened the emergency door of a plane before takeoff on a flight from Nanjing to Nanning.

When people asked him why, he reportedly replied that, "The door is not important."

Police at Nanjing Lukou International Airport jailed him for 10 days.

A man snuck onto an empty plane after stealing over R725 worth of food from an airport cafe in Birmingham, Alabama. 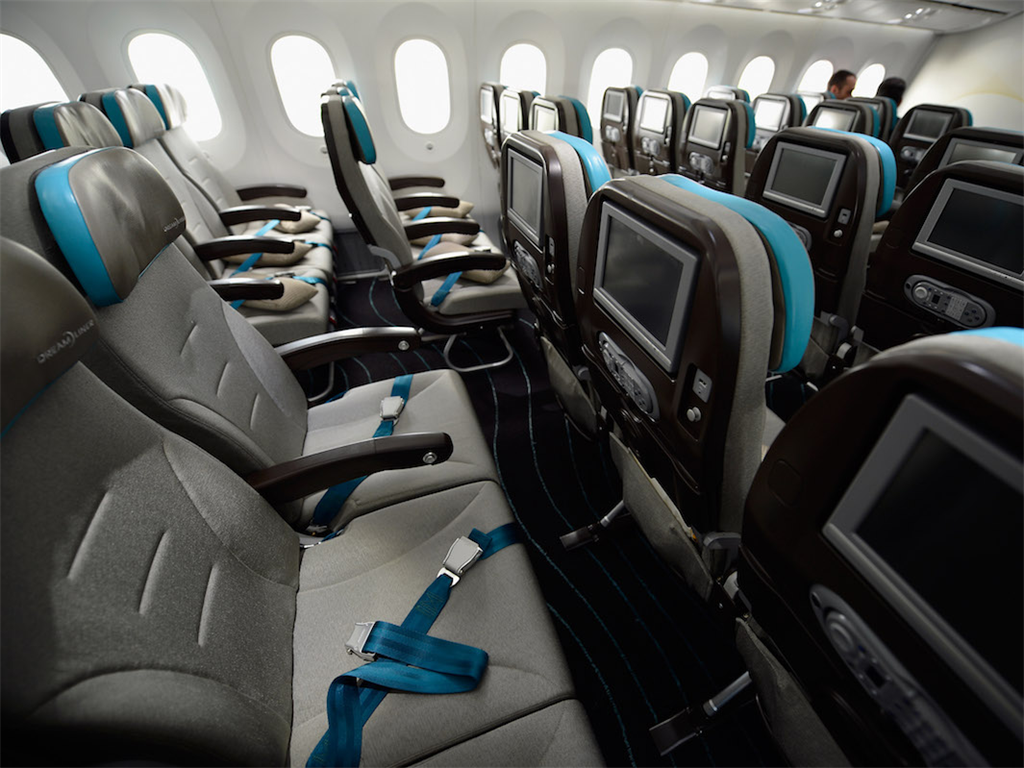 A 22-year-old hotel manager lost his job after pleading guilty to breaching airport security, boarding an empty plane unauthorized, and stealing over $50 (R724) worth of food from an airport cafe at Birmingham-Shuttlesworth International Airport in 2014.

According to The Guardian, the man was so drunk that he couldn't remember how he got to the airport and didn't have a flight reservation.

According to reports, a man opened the emergency exit door as a Urumqi Airlines flight was preparing to take off.

In 2015, a man on a Urumqi Airlines flight to China's Xinjiang region allegedly accidentally opened the emergency exit as the plane was getting ready to take off, the South China Morning Post reported. He claimed that it was the first time he was seated in an exit row and he thought the handle was a handrail to use to steady himself.

In yet another door-related incident, a first-time flyer allegedly opened the emergency exit door to get some fresh air on a Hainan Airlines flight in 2016.

A 30-year-old man who was flying for the first time thought that opening the plane's emergency exit door before takeoff was a good way to avoid air sickness, according to the South China Morning Post.

According to the report, a flight attendant alerted the captain after feeling wind on her face before takeoff and saw the door fully open. The flight from Shenzhen to Shenyang was reportedly delayed for nearly an hour as the man was removed from the plane, arrested, and fined.

A United Airlines flight to Hong Kong was diverted to Alaska when a passenger smeared feces all over the bathroom walls.

A United Airlines flight traveling from Chicago to Hong Kong was diverted to Alaska when a man reportedly spread feces all over the plane's bathroom walls, according to KTVA. He also allegedly removed his shirt and tried to stuff it in one of the plane's toilets.

The man was taken to Providence Hospital for a mental health evaluation.