A pilot project for a new libertarian floating city will have 300 homes, its own government, and its own cryptocurrency Nearly a decade ago, billionaire Peter Thiel cofounded a nonprofit called Seasteading Institute and contributed seed funding toward what could become the world's first floating city.

In May 2018, the institute embarked on a pilot project with the government of French Polynesia. The group plans to build 300 houses on an island, which will run under its own governance and use its own cryptocurrency called Varyon by 2022. On Thursday, presales began for the Varyon cryptocurrency, offering bonuses from 5% to 15%. The presale will last until July 14. (The Seasteading Institute has not yet determined when the public sale will start.)

At first, the project's founders imagined the city as a libertarian utopia free of regulation (and taxes). Joe Quirk, president of the Institute, told Business Insider that his team's vision has evolved beyond that. The group now also sees the city as a way to live with rising sea levels, which are expected to increase nearly 2 metres by the end of this century.Take a look at the ambitious plan below.

In early 2017, the French Polynesian government allowed the Seasteading Institute to start testing in its oceans. This week, the company announced that it will build 300 houses. Though Thiel provided initial funding for the project, Quirk said the billionaire is no longer directly involved. "Peter was the most generous donor to the Seasteading Institute for the first few years and gets credit for financially kick-starting this great movement, which would not be happening without him," Quirk said. In a 2009 essay, Thiel wrote, "Between cyberspace and outer space lies the possibility of settling the oceans."

The island will be located about 800m away from the shore. People will get back to land using a ferry. The first buildings will serve as the core of what could become an even larger city. There are multiple proposed designs. One would feature buildings in multiple clusters along with large solar panels and wind turbines. Another would be in a horseshoe shape and would include more green space. The team wants to grow much of its food through aquaculture, which involves breeding plants and fish in water. The islands could run on solar power and continuously gather and recycle its water from the ocean. He expects a dozen islands would cost $60 million, or around R820 million, which the team plans to raise via an initial coin offering — an unregulated way to fundraise using cryptocurrency. The first island plans to run under its own governance and use its own cryptocurrency, Varyon. "We will be living on the oceans long before we live on Mars," Quirk said. The plan is certainly ambitious. A floating city prototype for San Francisco Bay in 2010 never came to fruition. 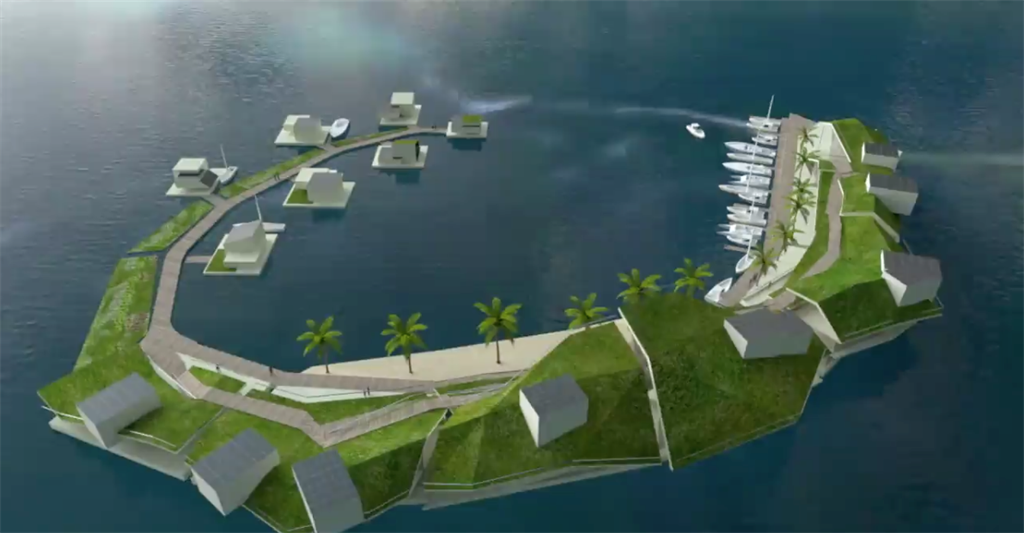 As The New York Times notes, living on the water was even a plotline in one episode of the HBO series "Silicon Valley." In recent years, seasteading has also become a symbol of the tech industry's tendency to conjure utopian, libertarian visions for the future.

At the same time, rising sea levels due to climate change threaten coastal cities around the world. Building a floating city could be one option for tackling that. "Floating islands solve two of the biggest problems in the world: Sea level change and the lack of start-up innovation in governance," Quirk said. If the institute manages to make its floating city a reality, Quirk said that the team would expand the project to include affordable housing. The first homes will be for luxury buyers. A rendering of the Floating Island Project in French Polynesia.
Blue Frontiers

Related Links
A 'dead zone' in the ocean - bigger than whole of KZN - has just been discovered
These wild images show how scientists could hunt for icebergs in Antarctica and tow them back to...
Scientists have just discovered a new ocean current off South Africa’s coast
Next on Business Insider
TAKE A LOOK | The disappointing reality of a royal event celebrating the Queen's Platinum Jubilee