This British startup thinks it has a crucial competitive advantage over Google, Uber, and Apple in the race to launch driverless cars in Europe FiveAI car on the road in London.
FiveAI
Anyone walking around the South London suburbs of Bromley and Croydon this week might spot a bright new addition to the roads: A futuristic sky-blue Ford Fusion laden with sensors.

FiveAI, a British driverless car startup, is putting five of these vehicles on UK roads to gather data to train its autonomous vehicles. The cars will collect information for the next 10 months to understand real-world road layouts, traffic flow, and the behaviour of other road users.

Part of the reason the cars look so lurid is so that the public knows who's gathering data. FiveAI said it is gathering information in a way that is compliant with Europe's strict privacy regulation, the GDPR, and no individual would be identifiable from the images it captures through its cameras. While these cars will be driven by humans at all times, the training data they gather will eventually inform FiveAI's efforts to bring shared, driverless taxis to London in 2019. The company said in May that it will begin trialling driverless cars on public roads before the end of 2018. FiveAI hopes to be Europe's answer to Uber or Google's driverless car efforts, and wants to create a shared, autonomous taxi service in the UK before it is beaten by a rich American or Chinese firm.

It has raised $18 million (R250 million) in Series A funding to date, but has to fend off behemoths that are worth billions of dollars. Uber has raised more than $1 billion (R14 billion) and is the most valuable startup in the world. Google is sitting on around $100 billion in cash.

Stan Boland, FiveAI's chief executive, has a historian's theory on why it can beat foreign competition.

"If I were [US companies] Waymo, Uber or Aurora... and I was trying to solve the problem of safer driving, I would choose to do it somewhere where it's an easier problem," he said.

"In Europe, our cities are medieval and complicated, density is much higher, human behaviours are different. Our cities were built from villages... I think a European city is much harder than a US city."

In other words, Google's driverless car tech might find it easier to learn in the expanses of the Nevada desert than it would in windy London roads, originally designed for driving cattle.

Still, he acknowledged that "Europe is late" and puts this down to two reasons: US companies benefited from research pioneered by DARPA, America's military research agency, and because it has never been in the European car industry's interest to upend its existing business model. "Europe has been a bit asleep at the wheel," Boland said.

He said it's important that European governments recognise this and clear a path for local companies, rather than being "dazzled" by similar offerings from Silicon Valley giants. "It's very easy for governments to be pushed around by big companies and to be dazzled by [for example] Google's first step... It's quite important we recognise the fact we need to build some big companies out of Europe," he explained.

While FiveAI's sky-blue cars are cruising around London's streets gathering data, their autonomous counterparts are still being fine-tuned at a testing ground north of London. The goal is to build a fully fledged driverless car system that can be integrated into different vehicles — perhaps with an eye to licensing that technology out to carmakers.

Boland said in May that FiveAI would be ready to conduct a public trial of its driverless cars later this year. Like other driverless car projects, FiveAI's autonomous vehicles rely on being able to "see" and understand what is around them, and react accordingly.

FiveAI's system is a little different from that being tested out by Google. It is aiming to create a software and hardware stack that would allow vehicles to navigate complex environments with simple maps, rather than highly detailed, precise 3D maps. The company has fitted eight Ford Fusions with a large number of sensors, and is testing them out at Millbrook Proving Ground in Bedfordshire.

Those sensors comprise 14 cameras, three laser detectors, six radars, a GPS, and the additional computing power. There is so much computing power that the hardware is not only housed in a roofbox, but under the bumper and in the trunk. There's also 100kg of battery in the car, Boland said.

The cameras, organised in stereo pairs, do the "seeing", processing raw data feeds and using these to build up an image of their surroundings, and to identify individual objects. Then a deep neural network tries to make sense of the objects in the picture in real time. Even accounting for delays in processing, Boland said, the system "thinks" faster than a human.

"It should be possible for us to build a system that is at least as safe as a human, hopefully safer," he said.

Investors are confident in FiveAI

Though FiveAI's funding is small, Boland said investors are confident.

He described FiveAI's fundraising process last year: "Quite often after half an hour, investors would say 'I should probably do this, will you please let me write a cheque?', and so we could have raised about $100 million last summer when we were raising our Series A, but we only raised $18 million."

Boland has previously said publicly that FiveAI has raised a modest sum because it's still building its tech platform. FiveAI will need the big capital raise in future when it wants to buy lots of cars to load its system onto. That may be some point after 2021, according to his previous comments.

Part of the reason for investors wanting to throw money at FiveAI is because Stan Boland is who he is. 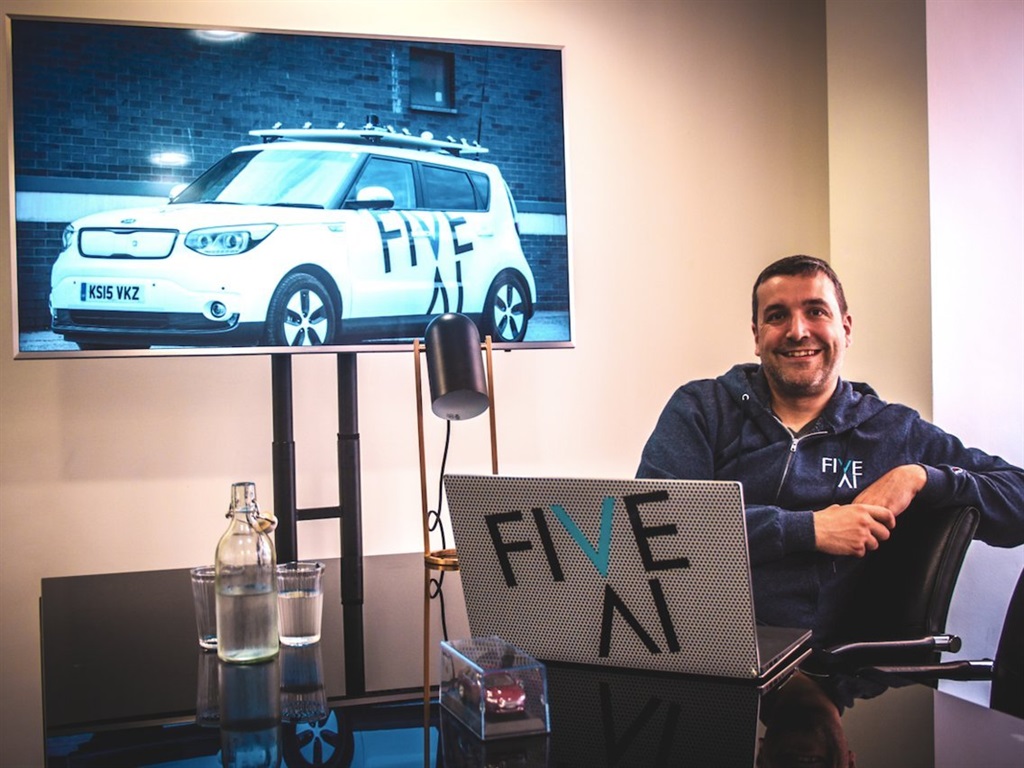 "He's able to recruit super talent because of who he is," Mistry said.

Boland managed to poach a senior engineer from Facebook's Oculus division to run FiveAI's simulation team in London. "You're pulling people out of very well-paid jobs, the £200,000 jobs that the Facebooks, Googles, and others offer."

Related Links
Uber reveals its flying taxi prototype and says it will be affordable to 'normal people'
Google built a tiny Street View car to map out one of the world's largest model cities, and the...
This $12 billion startup that wants to cure baldness and smooth out your wrinkles, just raised...
Next on Business Insider
Top hackers are competing to break into a Tesla. The winner gets R9,5m and keeps the car