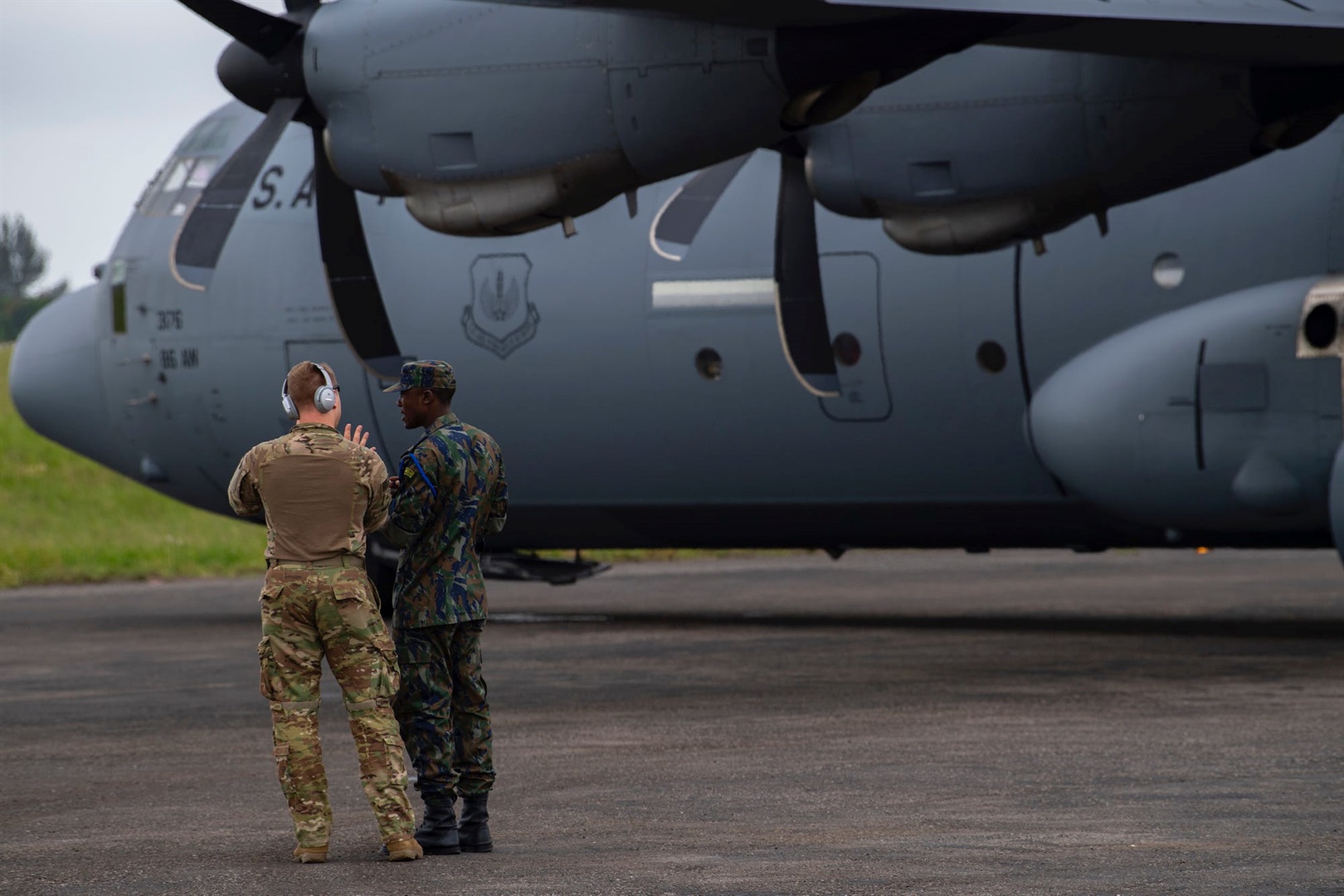 A US soldier talks to a Mozambique soldier next to a US C-130J in Maputo, Mozambique, April 5, 2019.
US Air Force/Tech. Sgt. Chris Hibben

The fighters attacked civilians with machetes and assault rifles, leaving behind beheaded and bullet-ridden bodies. Thousands of people have fled the besieged city for the coast.

The violence lasted several days and culminated at the Amarula Palma Hotel, an oasis for expats and foreign workers, where helicopters evacuated people barricaded inside and searched for others hiding nearby. Reports put the death toll anywhere from scores to hundreds.

The bloodshed was a surprise to most but likely not to the US Army Green Berets who have been in Cabo Delgado for weeks training Mozambique's army, according to a March report by The New York Times.

According to The Times, "two dozen" of the elite soldiers were in the region as part of an ongoing effort to contain the militant group Ansar al-Sunna, known locally as al-Shabbab (unrelated to the Somali jihadist group), which recently confirmed its affiliation with ISIS.

The soldiers were part of what the Special Forces refers to as a Joint Combined Exchange Training, or JCET. Special Operations Command Africa initiated the JCET in Mozambique in March, sending two Special Forces teams, each with 12 soldiers, to Cabo Delgado.

A source close to Army Special Forces told Insider that the JCET has been reinforced with a Crisis Response Force - the Special Forces equivalent of a Tier 1 counter-terrorism force.

According to the source, who spoke on the condition of anonymity, six 12-person Special Forces teams have been deployed to Mozambique.

Special Operations Command Africa, however, denied any CRF had deployed.

"There are no Contingency Response Forces from 3rd [Special Forces Group] or any other US unit in Mozambique," a spokesperson said. "The team currently in Mozambique is only there to conduct a Joint Combined Exchange Training."

Militants, mercenaries, and civilians under fire

Carried out all over the world, JCETs are billed as a way for Special Forces soldiers to get first-hand experience with foreign militaries, learn mission-essential skills, and build their local knowledge.

JCETs also allow the US military to put eyes on the ground in regions where conflict may be brewing, but they have been criticized for inadvertently equipping foreign forces with skills that are misused when the US departs.

On March 10, the US State Department designated Ansar al-Sunna as a terrorist organisation and officially confirmed its ties to ISIS. Conservative estimates put the current al-Sunna fighting force at 800 insurgents and growing rapidly.

The designation is not unfounded, based on the violence attributed to the group's fighters in recent years. But it has become common for the US to issue such designations prior to clandestine operations against those organisations.

Such designations allow special-operations forces to receive air support and, more importantly, US Predator drones. US laws allow authorisation for strikes to be made by US commanders on the ground when US forces are conducting counter-terrorism operations.

Mozambique's government has attempted to subdue al-Sunna, and many have criticised the government for draconian measures and heavy-handed military operations that do little to distinguish civilians from insurgents and only exacerbate the humanitarian crisis. Mozambican soldiers at the airport in Pemba, the capital of Cabo Delgado, March 31, 2021.
AFP via Getty Images

Unable to quell the violence, the government first turned to the Wanger Group, a Russian security firm linked to the Kremlin. The group is owned by Yevgeny Preghozin, a Russian oligarch who is very close to Putin, and its fighters are deployed across Africa and the Middle East, often acting in alignment with Moscow's interests.

In 2019, Wagner mobilised a large force, including helicopter gunships, against al-Sunna in Cabo Delgado. The militant group was supported by ISIS and with fighters and equipment from neighbouring nations. Wagner's forces were foiled, in large part by a lack of experience in the region, and quickly retreated to Nacala, roughly 402 kilometers to the south.

The Mozambique government then turned to the Dyke Advisory Group, or DAG, a South African private military contractor.

DAG encountered the same problems: a growing insurgency supported by international terror organisations and enmeshed with the local population. The Amnesty International report also attributes atrocities to DAG, citing eyewitness accounts of DAG operatives firing from helicopters "indiscriminately into crowds of people" as well as repeatedly firing on civilian infrastructure, like hospitals and homes.

The recent violence comes at a crucial moment for DAG, whose relationship with the Mozambique government has frayed.

DAG personnel have spent months training Mozambique's military with helicopters the group imported from Britain to supplement the military's own helicopters, which are variants of the Mi-24 attack helicopter.

But DAG has struggled with this assignment in Cabo Delgado. Several reports of downed aircraft have leaked out of the wartorn province over the past year, including one that militants carrying the now trademark ISIS flag celebrated in a video released by ISIS's media wing.

DAG's owner, Lionel Dyke, has bristled about the difficulties the group has faced.

"We are doing something that nobody else can do or has wanted to do, so use what you have got. And if it is not efficient, fire us. It's as simple as that," he told CNN on March 31.

Mozambique's government terminated the contract the next day.

The backdrop to the violence and efforts to quell it is Cabo Delgado's valuable natural resources, which Mozambique's government is using to lure foreign support.

Cabo Delgado is home to one of Africa's largest natural gas reserves. Discovered in 2010, the gas was initially a source of hope for the people of Cabo Delgado. Locals believed the reserves would lead to good jobs and boost the beleaguered local economy.

But Mozambique's central government - particularly its ruling party - dealt with gas companies directly in exchange for most of the profits. Locals, mostly struggling subsistence farmers and fishermen, were left out, with many losing access to their farmland and fisheries.

People in Cabo Delgado, a majority-Muslim province, were already frustrated by long-standing government corruption as well as isolation and discrimination from the rest of the country. As it has elsewhere, ISIS capitalised on local anger to expand its operations, spreading its message of radicalisation.

Islamists from elsewhere in Africa set up mosques in Cabo Delgado and promoted rumours that local imams were allied with the corrupt government, Mozambique expert Joseph Hanlon wrote in a report for the BBC. These Islamists began providing financial assistance to local communities and told residents their lives would be better under stringent Islamic law, known as Sharia.

To receive support from ISIS - mostly in the form of weapons - all the locals, and later the members of Ansar al-Sunna, had to do was recognise ISIS, promoting the group's propaganda and efforts to expand.

For its efforts, ISIS can extend its reach to a new region - where ungoverned spaces further facilitate that expansion - and access valuable resources, profits from which can be redistributed to other needy franchises.

That violence and the stakes involved are why US Special Operations Command has tripled its forces in the province.

The response likely reflects a mix of political and commercial interests. Washington may see continued chaos in Cabo Delgado as a threat that will surely benefit ISIS and its operations in Africa. US firms may also be looking to secure access to the precious natural gas that foreign companies are already jockeying to exploit.

Mozambique is now on the list of African nations where the US is deeply involved. The fighting in Cabo Delgado is far from over, but what remains uncertain is whether the elite Green Berets and deadly drones they wield will be stymied like the Russians and South Africans before them.

J.W. Sotak is a defense and foreign-policy reporter who focuses on the Middle East and Africa. He is a 10-year veteran of the US Army and served as part of a Army Civil Affairs Provincial Reconstruction Team in Afghanistan. His reports have been published on SOFREP and the New York Times. You can follow him on Twitter at @JWSotak.