A father and daughter worked together to transform a train caboose into an Airbnb.
Courtesy of Danielle Dotzenrod

Jim Dotzenrod purchased the train caboose from a scrapyard in 2016. Jim Dotzenrod bought the train caboose during the spring of 2016.
Courtesy of Danielle Dotzenrod

Jim Dotzenrod drove by a row of train cabooses in Decorah, Iowa, several times before he decided to take a closer look in 2016.

"By a town 30 miles north of us, there's a line of cabooses along the road a guy bought in an investment," Jim, 65, told Insider. "And I thought, 'Well, I wonder what you could use one of them for?' Then, I thought of an Airbnb."

Unfortunately, the owner wasn't keen on selling any of the ten cabooses, forcing Jim to go out and search for one himself.

"My daughter's partner at the time told me there was one 30 miles away at a salvage recycling yard," Jim said.

The property is listed as the CR Station Train Caboose on Airbnb.

It wasn't Jim's first time jumping into the world of home renovations and Airbnbs. Jim, a retired carpenter, previously repurposed a silo attached to his farm into a popular Airbnb listing.

Jim transported the caboose to his home, but it was no walk in the park. Jim Dotzenrod and a friend help place the train caboose on a set of tracks near his Iowa home.
Courtesy of Danielle Dotzenrod

Finding a caboose to purchase was one challenge, but moving it from the scrapyard to Jim's property was another obstacle. The process involved a semi-truck, a crane, and a lift.

"They had two big excavators at the salvage yard," Jim said. "They put straps on the caboose, and they lifted it onto the semi I had hired."

Jim's daughter Danielle, 42, told Insider that her father also acquired real railroad tracks to use as a base for the caboose once it arrived in his yard. Upon arrival, the semi-truck drove the caboose underneath a large crane and lifted it onto the set of isolated railroad tracks placed nearby.

Jim's first step was gutting the decades-old caboose so the space could be renovated. It took the Dotzenod's six months to renovate the caboose.
Courtesy of Danielle Dotzenrod

The $4,000 renovation process began by stripping the caboose to its bare bones.

"I had to get the iron out of there, and after I gutted it, I had to power wash it to get that diesel fuel smell out," Jim said. "It was strong — it was just that lingering odour of diesel fuel."

Jim then went back in with some air freshener to finish the job.

The Dotzenrod's caboose has two sleeping arrangements — a queen-size bed and a bunk bed set that can hold up to four people. The caboose also has a bathroom, a kitchen with a microwave and refrigerator, a double burner hot plate, and barware supplies for cocktails.

The property also includes air conditioning, Wi-Fi, and a TV. Jim built a staircase to create sleeping arrangements in the caboose.
Courtest of Danielle Dotzenrod

Danielle told Insider that her father used his carpentry skills to replace the caboose's ironwork with woodwork.

"My dad can do anything he sets his mind to — like absolutely anything — but my dad is so low maintenance himself," Danielle, owner of Dotzy's Restaurant and Saloon, said. "So, when we built this together, it was a good combo because he could build whatever and have me nudging him like, "Hey, let's make this as cool as we can."

Although Jim got some help with cutting new windows into the sides of the caboose, he handcrafted a new staircase after setting the cabinets in place and making space for the queen size bed. He also used his carpentry expertise to create an outdoor deck visible from the caboose's windows.

Jim had to do renovations at night or on the weekends because of his regular job. Jim Dotzenrod outfitted the caboose with wood after working as a carpenter.
Courtesy of Danielle Dotzenrod

Meanwhile, Jim was still working at his regular day job and had to find time during the night or on weekends to chip away at the passion project.

"I thought it would work as far as generating income," Jim said. "After my regular job, I just stayed at it at night and on weekends to get it done."

The entire renovation project lasted about six months before it was completed in November 2016. Jim told Insider he spent around 300 hours labouring over the caboose.

Danielle stepped in to add some personal, cozy touches and helped tile parts of the caboose. While Jim tackled a lot of the structural changes, he freely admits that Danielle chose the little decorative charms and much of the overall design.

Jim said that Danielle designed the floor — black tiles surrounded by oak wood — and many small details that pull the interior together. Danielle was also the one who helped decide the caboose's colour motif.

Jim added that the wine glass holders hanging from the wall are actually rake heads that Danielle repurposed.

Visitors can lounge on the couch and warm up by the electric fireplace. Danielle snagged the electric fireplace, mirror, and sofa while hunting for decor pieces in nearby cities.
Courtesy of Danielle Dotzenrod

Jim praised his daughter while speaking to Insider, noting that she drove her pickup truck to nearby towns to find different pieces and furniture options.

"There's a little electric fireplace in there that Danielle went to Madison, Wisconsin, and got for me," Jim said about the caboose's decor. "There's a sofa and then a big mirror that she went and got out of Minneapolis."

Jim and Danielle felt it was important to preserve parts of the original train caboose. The original conductor's chair is pictured in the photo and is placed near windows overlooking the sprawling horse pasture.
Courtesy of Danielle Dotzenrod.

Jim and Danielle wanted to preserve the original charm of the caboose, so they saved the original conductor chairs and hand railing.

"We wanted it to be nice but still feel like you're in a caboose," Danielle said. "I think that's something we pride ourselves on. There's a few other cabooses out there, but sometimes when you're in it, you don't even really realise it's a caboose."

Jim agreed, adding: "The outside, of course, looks like a Caboose, but you have to keep just a little bit of the novelty of it in there, so visitors know what it was like back in the day."

The conductors' chairs can swivel and are near the windows that overlook the property. The original railing is located in the middle of the caboose roof.

The caboose has a bathroom that includes a shower. Even in a confined space like a caboose, the Dotzenrods didn't skimp on amenities. The caboose includes a bathroom with a shower and toilet.

Danielle told Insider that Jim cut the tile, but she was responsible for tiling the shower walls.

The home features one queen-size bed and a bunk bed. 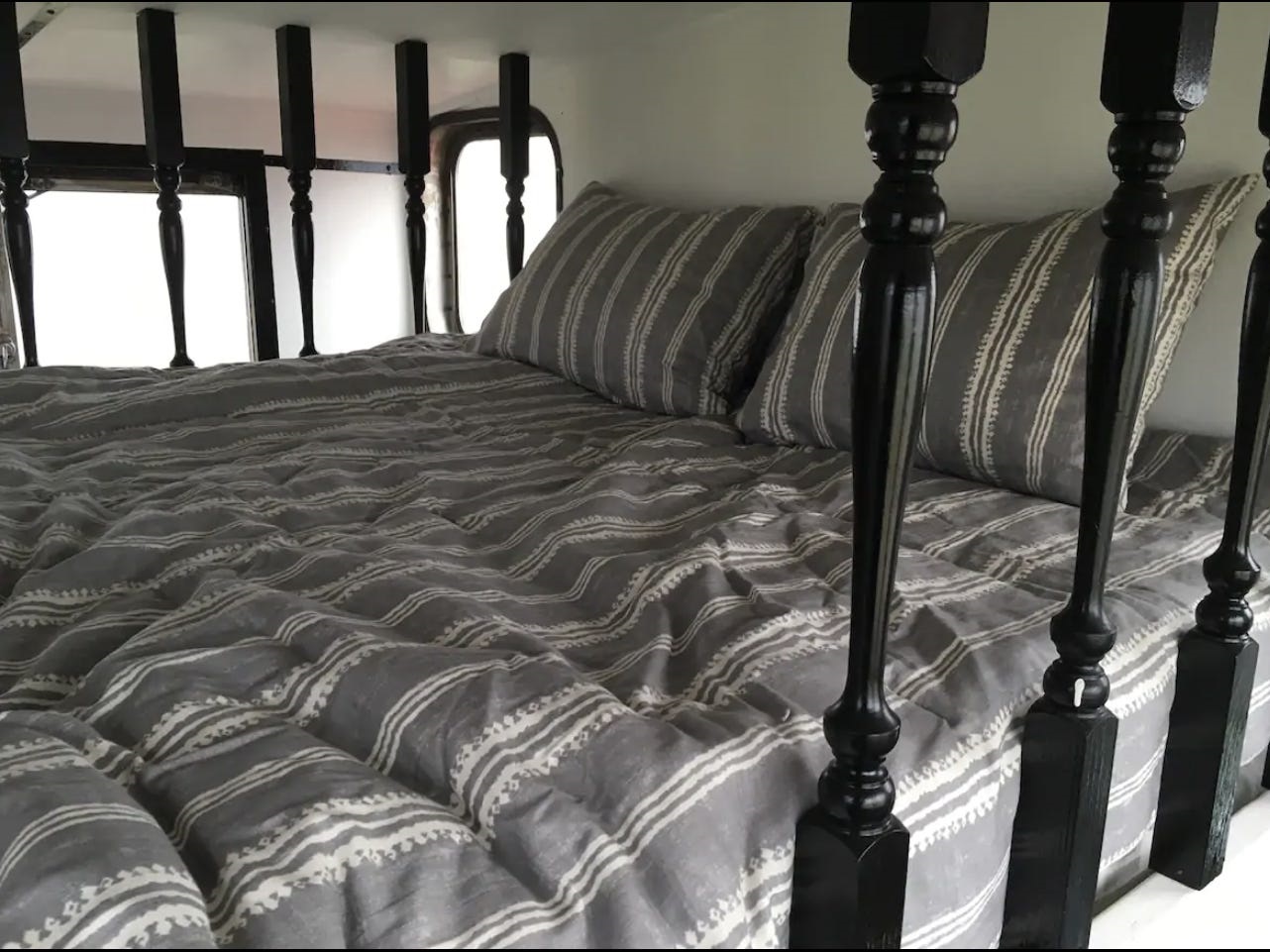 The queen-size bed is upstairs at the top of the caboose, while the bunk bed is on the first floor near the rear.

While speaking with Insider, Jim mentioned that two women with small children currently occupied the space.

He noted that a good chunk of their customers come from surrounding cities like Des Moines, and Danielle noted that the Airbnb is almost always booked during the summer by families hoping to escape city life.

Outside, guests can enjoy a handmade wood deck that's near the horse pastures. Jim Dotzenrod constructed the outdoor deck by himself.
Courtesy of Danielle Dotzenrod

The outdoor deck Jim crafted overlooks the Dotzenrod's pasture, where visitors can feed and pet horses on the property. Danielle said the horse pasture became an unexpected draw for visitors.

"I'd say 90% of reviews give a shout-out to the horses," Danielle said, adding that there are plenty of things to do for guests who want to travel into town or spend time on activities. Visitors can go kayaking on the Upper Iowa River, view the sites on an 11-mile trail, take lessons at a local shooting range, or visit a world-class brewery. Decorah's Toppling Goliath brewery has won numerous awards and is located around 15 minutes from the caboose.

Of all the options visitors can do while staying at the caboose, Danielle said her favourite moments happen when people kick back and enjoy the serene nature.

"When we see guests sitting on the deck having a cocktail during sunset or watching the horses in the pasture, it feels nice to offer city people that chance," Danielle said. "It's something that we country people probably take for granted, but it's something that they really appreciate."

Related Links
I got Covid while travelling solo. It's been a nightmare changing flights, finding place to...
Divorced dad promised son they'd live in a castle one day — so he built 3 and now welcomes guests
Airbnb neighbours can now report rowdy guests on its new helpline
Next on Business Insider
Russian state media shows off Putin's new 'long but round' table at the Kremlin