The Canadian Citizen Lab research group, which is part of the University of Toronto, in a report published Tuesday claimed that Iran is behind the programme, which it dubbed Endless Mayfly.

The researchers say it "spreads falsehoods and amplifies narratives critical of Saudi Arabia, the United States, and Israel."

In a statement to the Associated Press, Iran denied being behind the network. This fake Atlantic story alleging human rights abuses by Gulf states was created by an Iranian fake news network, according to the Citizen Lab.
Citizen Lab

The authors published "divisive content" on copycat news websites, often with names that imitated legitimate news websites, such as "Bloomberq," or the "The Indepnedent," the researchers said.

The technique is known as "typosquatting," in which a website impersonating another is created under a slight variant of its name.

The trolls created 72 lookalike domains, and 153 fake news articles, with one fake article designed to look like a Bloomberg report suggesting that the CIA would award Saudi Arabia's crown prince with a "medal of honour."

Citizen Lab said that a the people behind the posts also made fake social media profiles to spread the posts, some of which went as far as sending messages to journalists and activists whom they hoped would repost the material, lending it legitimacy.

In one case, Washington-based terrorism expert Ali Al-Ahmed received a direct message on Twitter from Mona A Rahman, who appeared to be a young female activist and critic of Saudi Arabia.

She tried to lure him to share a fake news article about Israel, posted on a website purporting to be linked to Harvard University. 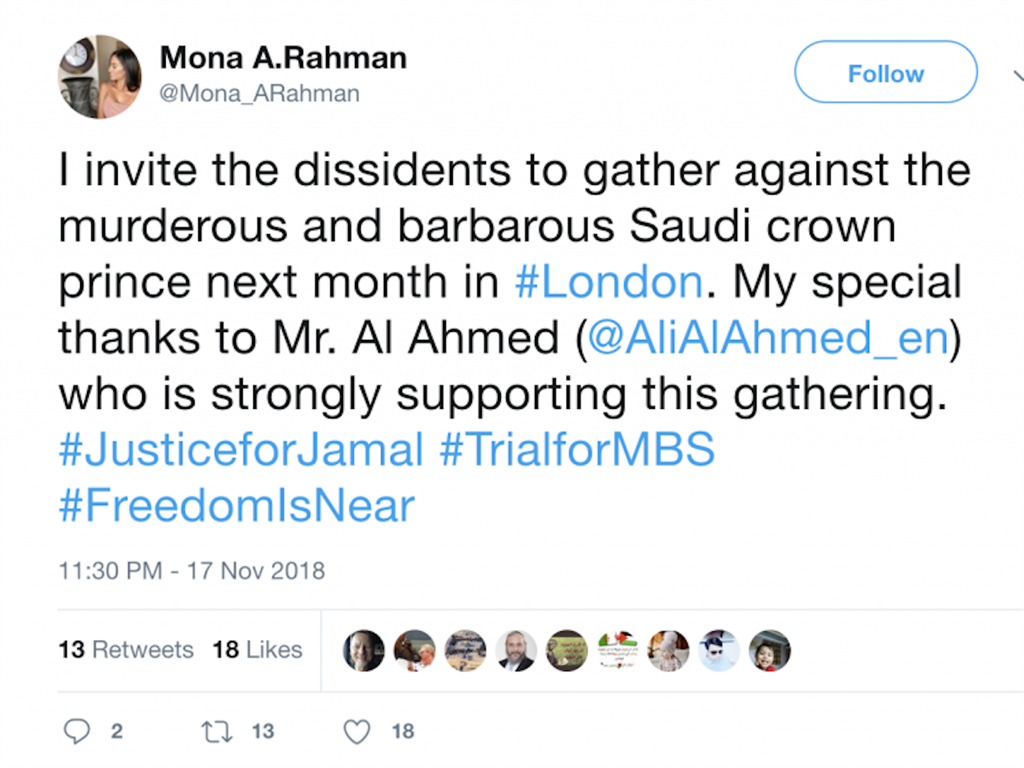 Al-Ahmed said he had previously been targeted by hackers posing as female journalists.

"They will never stop," Al-Ahmed told the Associated Press. "They think a hot girl can lure me."

Once an article was pushed out by fake social media profiles and received a certain degree of "amplification" by being retweeted and shared online, the link to the fake website was deleted, Citizen Lab said. It would then be replaced by a link to the legitimate site of the website imitated.

The report found that the disinformation has close links to a republishing network found by previous investigations to be an "Iranian government-backed disinformation operation."

In recent years, other adversaries of the US have sought to imitate Russia's operation in the 2016 presidential election and spread fake news and propaganda on social media.

Director of National Intelligence Dan Coates in January named Iran as one of three foreign powers, alongside Russia and China, which would probably seek to subvert the 2020 presidential election.

In October, Facebook closed down a network of 82 accounts, pages and groups originating in Iran which sought to spread divisive fake news and propaganda ahead of November's mid-term congressional elections.

According to the Citizen Lab report, many of the accounts removed by Facebook were linked to the Endless Mayfly network.