A 19-year-old who faked an entire trip to Coachella on Instagram says he fooled his family and friends: 'They believed every single post.' Coachella photos have been all over Instagram lately, and 19-year-old Byron Denton set out to prove that not everything you see on social media is exactly what it seems.

The London-based YouTuber previously fooled the internet by faking a rich lifestyle on Instagram, and he recently set his sights on faking a weekend at Coachella.

"After my first prank went so well I thought it would be fun to see if I could fool people again," Denton told INSIDER. "So with Coachella being such a big thing across social media, I thought it was the perfect chance to try and fool people a second time."

Denton started his prank with a few deceptive Instagram stories where he pretended to be at the airport alongside his friend and fellow YouTuber, Anastasia Kingsnorth.

He and Kingsnorth then posed for a few photos in Coachella-ready outfits, which they edited to look like Coachella in the background.

Denton posted his first edited photo from the festival on April 20, which has racked up over 13,000 likes at the time at this post

The photo shows him eating watermelon while sitting on what appears to be a field at Coachella, though the picture was actually taken in a nearby park. He started with a photo that he edited to look like a field at Coachella.
Byron Denton

He posted another photo later that day showing him in front of the festival's iconic ferris wheel, which has racked up over 17,000 likes at the time of this post.

Of course, the photo was also actually taken at the park, not Coachella. He edited himself in front of the iconic Coachella ferris wheel.
Byron Denton

He also shared a couple of Instagram stories that made it appear as though he was in the crowd, though the videos were from other people's accounts who were actually at Coachella.

Kingsnorth also shared photos that appeared to show her at the festival.

Denton eventually revealed his trip was fake in a YouTube video chronicling the elaborate plan, which he told INSIDER was more difficult than his first prank

"When starting out this prank I thought it would be as simple as the last one when it came to the editing," he told us. "However, this time around I was quite literally putting myself into a completely fabricated location, not just adding a few logo's onto T-shirts. This proved quite challenging!" Though his previous prank was ultimately a success, he said he learned some lessons along the way that helped him make the Coachella prank slightly more believable.

"The first time I did a faking prank, I over shared!" he said. "I was thinking about everything way too much to try and convince people it was real. I ended up posting a lot more than I would naturally, so this time around I didn't share too much, which also made people super intrigued to see more."

Once he revealed the Coachella trip was a hoax, he said the reaction was quite mixed since some people were familiar with his last prank.

"I feel like a lot of people now follow my Instagram just to try and catch me out when making these videos," he told INSIDER. "So a lot of people came forward saying they knew it was a prank, which led me to think everyone thought like that!"

Denton and Kingsnorth also ran into a slight problem when they attended a Shawn Mendes concert in London while they were supposed to be in California. A few fans noticed the duo at the concert, but they went undetected enough to keep the hoax going.

Some people did manage to spot some small editing flaws in his photos, such as one commenter who noticed multiples of the same people in the background. Denton said he deleted most of these comments that accused him of posting fake photos in an effort to keep up the illusion. 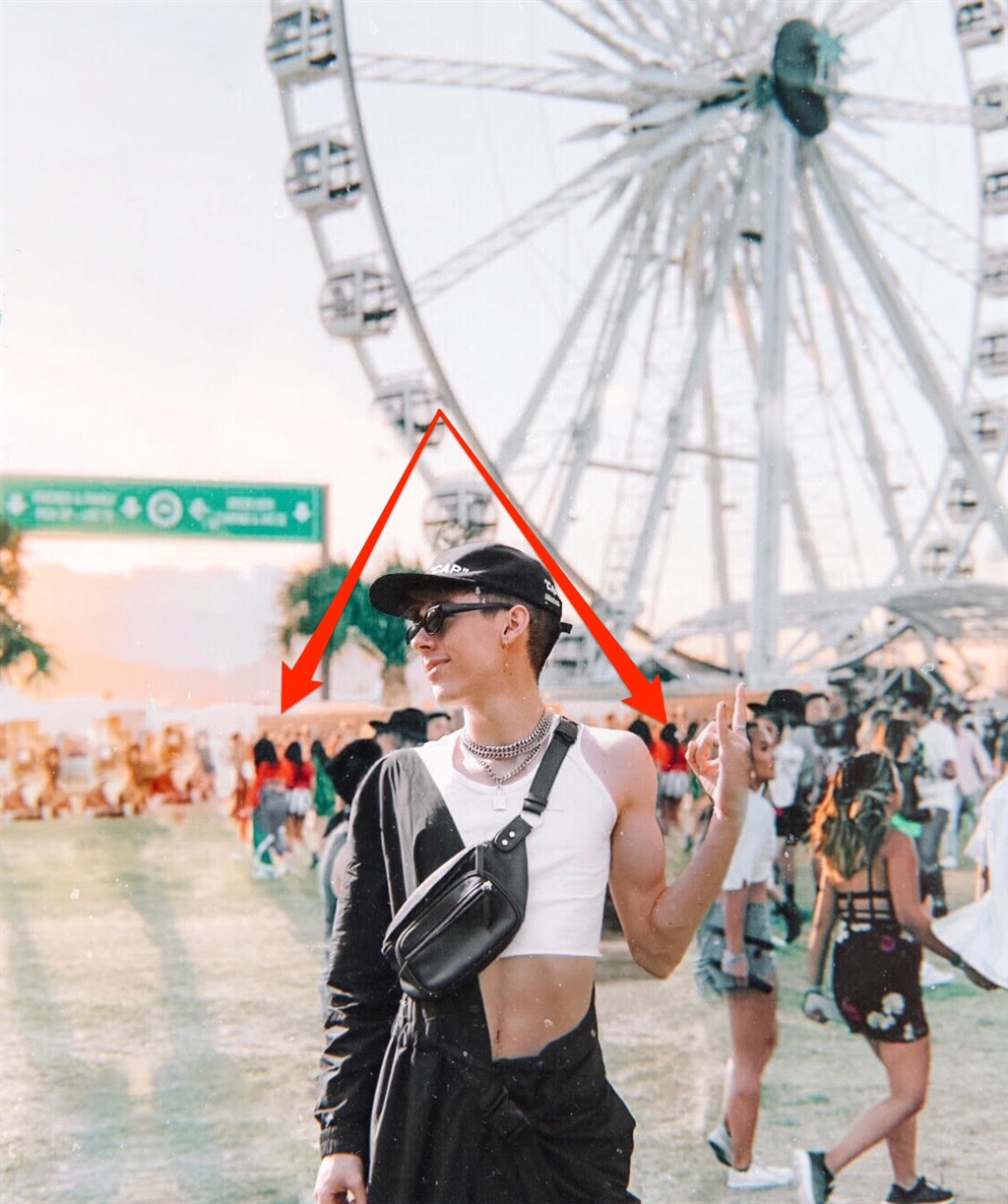 Some people spotted flaws in the photo editing.
Byron Denton

Though there were some mishaps, Denton says most of his followers fell for the prank

"However, I have had WAY more people say they believed it all," he said. "Even my family and friends have been coming forward telling me they're shocked and that they believed every single post!"

Now that the prank is over, Denton hopes that it reminds people how easy it is to present a perfect yet false image online.

"I think if anyone could take anything away from what I did it's that you really shouldn't compare your life and what you have to anyone else's, whether you think you know them or not," he said. "Especially on social media, because like I've demonstrated now, it is so easy to lead a fake life online. So, comparing yourself to something that's not even a reality can be really damaging." He edited himself into a private jet for his first prank.
Courtesy of Byron Denton

Denton thinks a lot of the pressure to live a luxurious lifestyle, whether real or not, is driven by the lives wealthy celebrities share on social media

"I think the temptation to fake a lifestyle comes down to us being so exposed to how people such as Kim Kardashian live," he told INSIDER. "If it wasn't for social media we wouldn't know what bags she has, or what shoes she just bought, but thanks to Instagram and other platforms we can see that."

He also points out that social media often presents a limited and highly curated version of many people's lives.

"It's a lifestyle many of us would love to be living so feel we have to almost live up to that standard, especially if you're in the social media industry yourself," Denton said. "Everyone is trying to better everyone else and the only way you can see who is 'doing better' or 'succeeding more' is through what each person chooses to share." 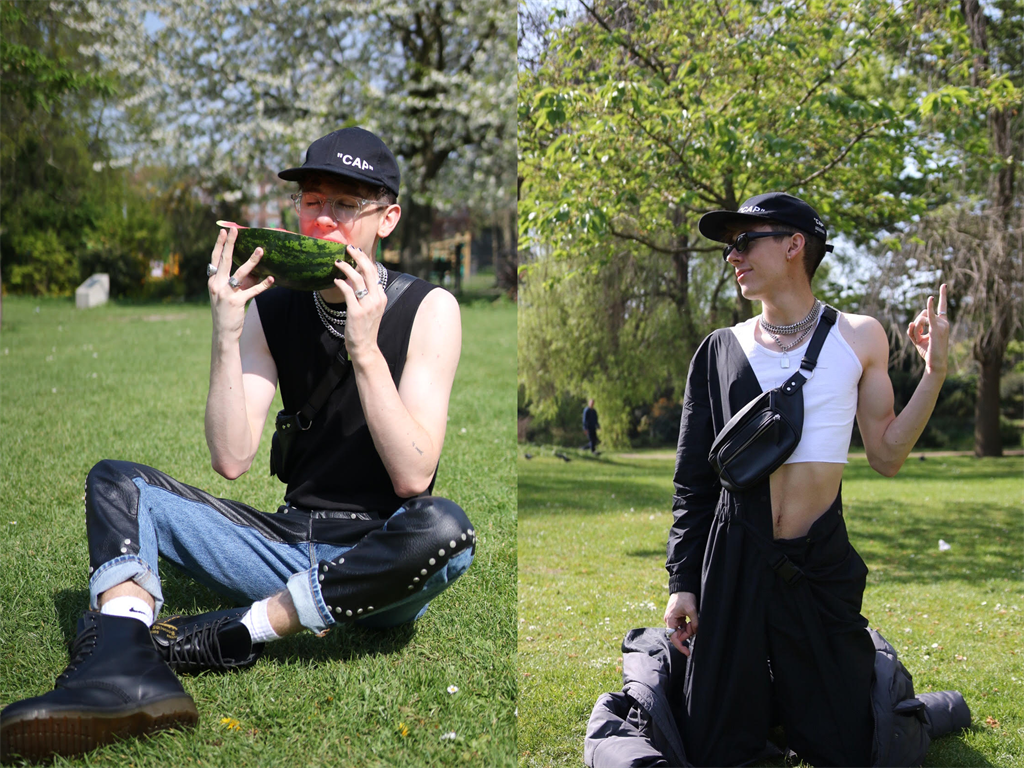 "I'd rather be successful for being me than trying to be someone else."
Byron Denton

Denton says he experiences some of that pressure himself, though he's learned not to compare his life to others.

"I personally used to feel a lot of pressure to be a certain way in order to succeed," he said. "However, now I've realised I'd rather be successful for being me than trying to be someone else."

Related Links
A Nike photo on Instagram featured a woman with armpit hair and the comment section erupted
The CIA's first post on Instagram is a cryptic mashup of hidden messages
We can't stop watching this chimpanzee, who uses Instagram even better than a teen
Next on Business Insider
Trump Jr. suggested Roe v. Wade was overturned as a result of Obama making fun of his father in 2011