For South Africa there were many memorable images from the Springboks' commanding win over England in the Rugby World Cup final – but for much of the rest of the world, and the UK in particular, one thing stood out: Faf de Klerk meeting British royal Prince Harry "in his underwear".

It was not underwear, though, and in one sense the whole thing was actually Springbok captain Siya Kolisi's fault, including the large amount of dog food that will go to an animal welfare charity as a result.

Thanks to a fortuitous shot on a live video stream from inside the Springbok dressing room during post-match celebrations, sharp-eyed viewers could figure out that De Klerk was actually wearing a swimsuit from Bean Bag The Brand, as emblazoned on the back. 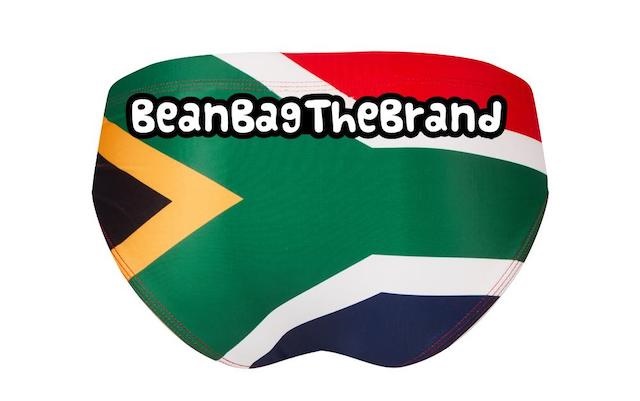 The small, Port Elizabeth-based company that makes the R299 bathing suit now believes it could ship a thousand of the swimsuits in time for Christmas, roughly what it would normally expect to sell over the course of a year.

"It has always been a best-seller, but this has been pretty unexpected," company owner Kurt Schmelzer told Business Insider South Africa on Monday.

All the more so because the entire thing was not a stage-managed product placement as the result of an expensive sponsorship.

A call 'out of the blue' from Siya Kolisi

Bean Bag launched in April last year in a light-hearted attempt to bring back what South Africans tend to refer to as "Speedos", even though that is a registered trademark that the small South African company definitely can not use.

"We don't give a $H!T if you ripped like a township dog or carry a beer boep that symbolizes your extreme level of life enjoyment!" the Bean Bag says in one of its pun-littered descriptions of its products. "As a matter of a fact we actually love your boep as it brings us onto our next topic, which is all about having a ball of a time!"

It has expanded its product line and now also sells clothing for "the babes", including bikini tops and bottoms in the same "Saffa" range as De Klerk made famous.

See also: A Cape Town boatbuilder is on track to deliver 190 luxury catamarans this year – and you can pick up your own 40-foot yacht for as little as R6 million

But it remained a small, specialised company that, in its own words, fought for social media space.

Then Kolisi – who knows Schmelzer from the days they both went to Grey High School in Port Elizabeth – got involved.

"About two months before the World Cup, out of the blue the phone rings, and Siya says 'hey Kurt, I see you've got this brand going, I like the vibe so much, would you like to send a couple of the boys a product or two?'", Schmelzer recounts.

"It was just out of the goodwill of his heart."

Watching the orders, and the donations

By Sunday Schmelzer had sold out what he says was between 100 and 150 units of the now-famous Saffa "Speedo" he had in stock. A new order is now with his manufacturers, but he is closely watching pre-orders – due for delivery in time for Christmas – after already underestimating demand.

Initially, he says, it seemed as if demand would peak on Sunday, then slacken off again. Instead "today seems to be going pretty well", he said late on Monday morning, and he is starting to think more orders may be coming in as the Springbok team returns to South Africa for their victory tour.

See also: After 44 years, South Africa’s ‘leading comfort’ shoes Green Cross are now all imported – and the name is starting to disappear from storefronts

Also due for re-calculation are the proceeds that will go to the Animal Welfare Society in Port Elizabeth, Bean Bag The Brand's chosen charity. Customers have the option to donate R50 towards food for the animals on each purchase, which the company then matches, for a total of R100.

In September donations totalled just under R4,400, not far from the R5,200 record set in July. If only half of the anticipated "Saffa" swimsuit buyers chose to make such donations, the November donation will be ten times as much.

To receive a daily alert with everything you need to know in business click here.

Related Links
UPDATE: Takealot will refund R4 million to 346 customers after the Springboks won the Rugby World...
The 10 heaviest players at the Rugby World Cup, and their biggest hits of all time
How Markus Jooste used rugby – and Steinhoff money – to shoulder his way into Stellenbosch society
Next on Business Insider
TAKE A LOOK | The disappointing reality of a royal event celebrating the Queen's Platinum Jubilee