Facebook finally revealed what its secretive robotics division is working on, and it could spark new competition with rivals like Google and Apple Facebook has unveiled three robotics projects that it hopes will contribute to solving the ongoing challenges of AI and robotics.
Facebook

Facebook has publicly spoken about its interest in robotics in the past, but on Monday, the company finally shared details regarding the specific projects it's working on.

The social media giant unveiled three robotics projects that it hopes will contribute to solving the ongoing challenge of building artificial intelligence systems that don't have to rely on large quantities of labelled data to learn new information. To do so, the company is conducting research aimed at teaching robots how to learn about the world, similar to the way that humans do.

"The real world is messy, it's difficult," Roberto Calandra, a research scientist in Facebook's AI division said when speaking to Business Insider. "The world is not a perfect place; it's not neat. So the fact that we are trying to develop algorithms that work on real robots [will] help to create [AI] algorithms that, generally speaking, are going to be more reliable, more robust, and that are going to learn faster."

The projects are housed within the company's artificial intelligence research division, a section of the company that operates independently of its suite of popular apps and services. The company says that its robotics and artificial intelligence research are being used to advance AI at an industry-wide and academic level, and that its computer scientists are not conducting research for the purpose of incorporating the technology into its user-facing products.

In one such project, Facebook is developing algorithms that would reduce the amount of time it would take for a six-legged robot learn to how to walk, even if the machine has no information about its current environment.

"The idea is that hopefully we can obtain performance where the robot, without any prior knowledge about the world or what it means to walk, can learn to walk in a natural way within a few hours," said Calandra. As part of another project, Facebook found that using curiosity as a motivator can help robots learn more quickly, drawing a parallel to the way humans learn. The company says it has applied this curiosity-driven technique to applications using a robotic arm, as well as in simulations.

The third area Facebook is currently looking at involves helping robots learn about the world through touch. The company developed a method that enables robots to accomplish tasks by learning through touch, without being given any specific training data. Part of why this is still such a challenge for machines is because it's difficult to build hardware with the right touch-enabled sensors, according to Calandra.

"As humans, whenever we grasp our cup or reach for our phones, we're actually very good at perceiving objects and understanding how to manipulate through touch," he said. "For robots, at the moment, the hardware is difficult to produce."

Speeding up the process

Such advancements could be crucial for speeding up the development of artificial intelligence systems. In many cases, AI systems must be trained with labelled data in order to function. For example, if you want to create an algorithm that can detect cats in photos, it must understand what a cat looks like by trawling through vast amounts of data, such as thousands of photos labeled as having cats in them.

But labelling data is time-consuming, and in some cases the necessary data may not be available at all. This is why Facebook's researchers are hoping that their robotics-oriented projects will lead to algorithms that can learn about the world similar to the way humans do.

Franziska Meier, also a research scientist for Facebook's AI group, points to natural language processing as one use case in which the required data may not be available. "You might want to translate between different languages and have a lot of data for some languages but not the others," she told Business Insider. 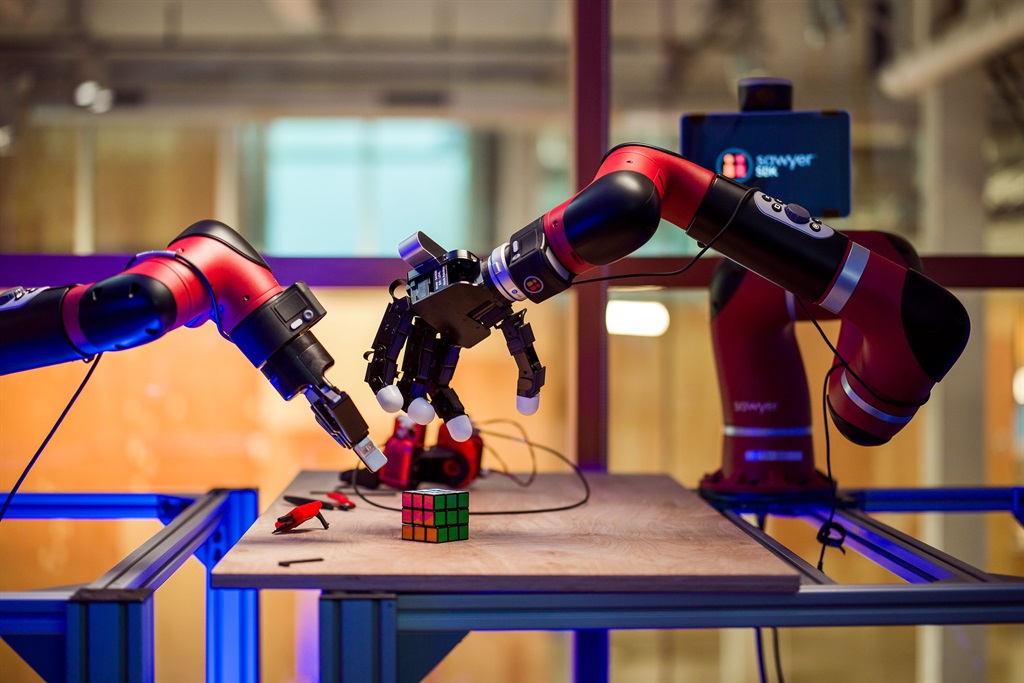 It's also an effort by Facebook to establish itself as a leader in artificial intelligence, a title that rivals like Google and Apple, among others, are also vying for. Facebook announced last year that it had hired prominent computer scientists from Carnegie Mellon University to bolster its AI and robotics efforts, while Apple revealed in December that it had poached a top Google executive to head up its machine learning and artificial intelligence strategy.

Top Silicon Valley firms like Facebook are investing more heavily in AI, as the industry is expected to boom. Market research firm Gartner predicts that the business value derived from artificial intelligence is estimated to have totaled $1.2 trillion (R17 trillion) in 2018, representing a 70% increase from 2017.