Facebook has quietly launched an image-editing app called Whale, intended to generate memes that can be easily edited and shared across different social and messaging apps.

It's only available for the iPhone in Canada, but it seems to be a clear attempt to keep ahold of the teen and Gen Z market, which Facebook is in danger of losing to hit video app TikTok.

We first saw the news of Whale via The Information.

Whale is only available on iPhone and in Canada, but we managed to download the app and give it a whirl.

Here's how it works:

Here's the Whale app on Apple's App Store. It isn't obvious the app was built by Facebook. Whale is only available to Canadian iPhone users, but is expected to be rolled out more widely in the near future.

Whale's developer is listed on the App Store as "NPE Team." You wouldn't know it from that listing, but that refers to Facebook's experimental apps team. It means that anyone using Whale is subject to the same terms as conditions as with other Facebook-owned apps.

The app's format is extremely simple. When you open the app, it opens into a gallery of photos from your camera reel, or a selection of stock photos. Naturally, the stock photos are devoid of context or explanation, presumably leaving the user free to put their own hilarious spin on them.

You can also take photos from inside the app.

There are around 90 stock photos to choose from. A surprising number of the stock images relate to watermelons, for unclear reasons. 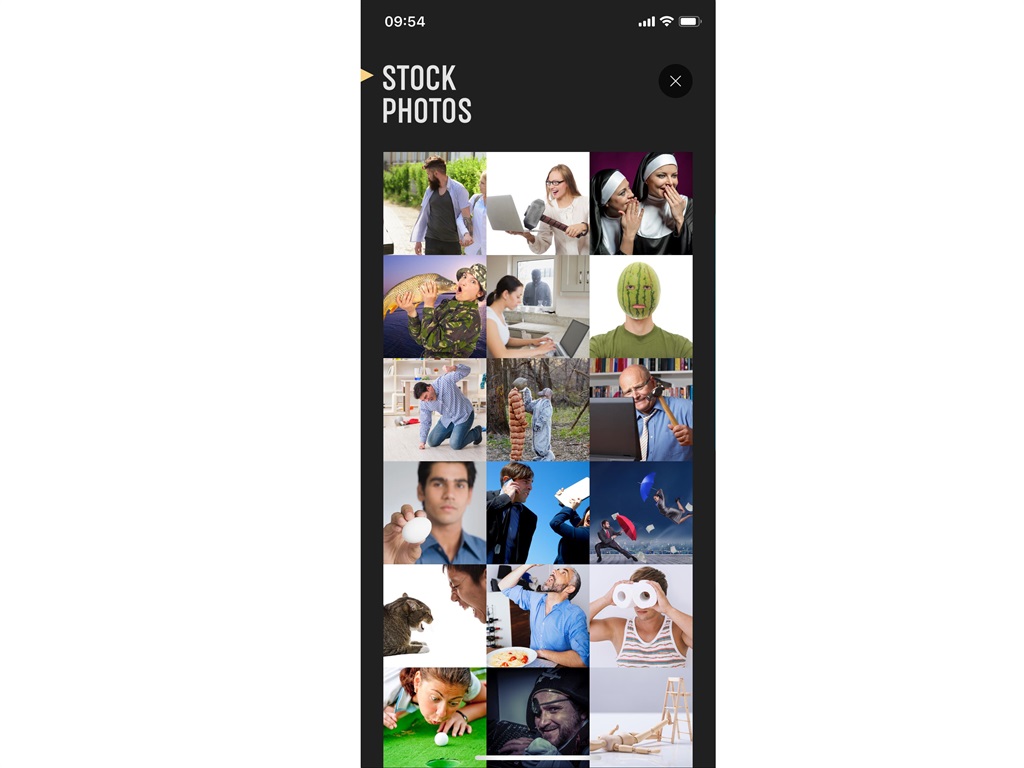 Some of the most wacky stock photos include a man using two toilet rolls as binoculars, a man with a watermelon for a head, a woman holding a carp, two giggling nuns, and a cat owner hissing back at their cat. There are several weird watermelon photos in the selection.

After selecting a photo, the app pretty much gives you free rein to create your meme. You can select text, emojis and other effects to add to your image. You can change the font and font size, and position your chosen text anywhere on screen. You can also choose from a number of snazzy visual effects, including pixellation, 'whoosh' effects, and more. You can change the colour of your text. And as with lots of other messaging apps, you can doodle over your selected photo. There are some other cool effects, like this 'vortex' visual effect. It wouldn't be a meme generator without emojis – many of the emojis available on Messenger are available on Whale, though they're predominantly ones involving faces (rather than animals or flags, for example). Once you've completed making your meme, Whale encourages you to share it across Facebook's other social networks. You can also share the edited image across other social networks or messaging apps.

Because the app is connected to Facebook, users are expected to abide by its community standards. Whale is pretty fun to use and extremely simple, but it joins a crowded ecosystem of social apps.

Whale doesn't offer much more than the image-editing tools you might see on Snapchat or Instagram, which also let you overlay images with colourful text and graphics. Still, Facebook's NPE team is all about shipping products rapidly, and the firm will shut apps down that don't take off. This may just be a neat experiment.