Slack is changing the way we chat at work. Here's an etiquette guide to help you survive a messaging-obsessed office. 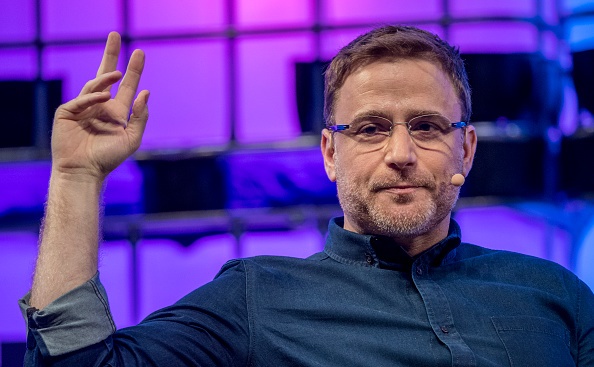 Stewart Butterfield, Co-Founder and CEO, Slack, delivers remarks on The Future of Work: Enabling Human Connection during the third day of Web Summit in Altice Arena in Lisbon in 2017. (Photo by Horacio Villalobos - Corbis/Getty Images)

I used to think of myself as a professional, hard-working employee - until the day I swore at my boss.

He had started a chat conversation over Slack to alert me of a shocking development in my careers beat. While I can't recall the exact comment, I remember I found his news so disturbing I instinctively typed: "JFC."

My boss questioned what I meant by the acronym, and I instantly felt my face get red with shame. The acronym stood for "Jesus F****** Christ" - not only did I take the Lord's name in vain, I used a swear word.

While I only occasionally use that phrase (and I don't swear that much verbally), over chat I'll routinely use "WTF" and "LMAO" with my friends. But now, chatting is part of the modern office - Slack grew from 0 to 8 million daily users in just four years, and Microsoft says its competitor tool Teams might be growing even faster.

You can be more casual on Slack than over email, and chat platforms can even help you form friendships at work. Still, there are some things - like swearing - that should stay out of the office entirely.

Here is the ultimate Slack etiquette guide for your workplace:

Don't use acronyms with swear words in them.

Unfortunately for me, all career experts I spoke with said "WTF" has no place in your office Slack, no matter how ubiquitous the phrase has become.

Even though most people know what "WTF" means and are probably okay seeing it in their messages, Michael Kerr, an international business speaker and author of "The Humor Advantage," said that swearing still has no place at work.

"We have to remember that a lot of eyes are watching," Kerr added. "You'll have to anticipate that there are future readers on Slack who might not be comfortable with that style or that kind of language."

Since your company can see your Slack, don't talk about job hunting, medical history, bank details, or ill feelings toward coworkers.

It's no secret your company reads your Slack messages and emails. Better technology has made tracking employee behavior easier and (sometimes) more invasive - and companies can legally access any communication that happens in the office or through work devices, employment lawyers told The Wall Street Journal.

Because of these restrictions, Marc Cenedella, founder and CEO of Ladders job search, advises that employees not discuss sensitive information on Slack, like your medical history or banking information. While your employer cannot legally discriminate based on any disease or condition, you should still keep personal issues as private as possible.

Furthermore, if you're looking for a promotion (or not to get fired), don't tell anyone you hate your boss on Slack either.

"People just don't realise all of your chats are saved on Slack," Cenedella told Business Insider. "Do not overshare your personal details or personal feelings on Slack."

Don't get in an argument over Slack.

iMessage and chat rooms sometimes allow users to talk to others in ways that they normally wouldn't when chatting face-to-face, says Lynn Taylor, workplace expert and author of ""Tame Your Terrible Office Tyrant." Cyberbullying, for instance, is on the rise among young people with cell phones, according to federal data.

While many professionals don't outright bully coworkers, Slack makes it easier to respond with passive-aggressive comments that we wouldn't use in person.

"Slack is just not a good venue for an employee to deploy passive-aggressive tendencies toward a coworker or worse, your boss," Taylor told Business Insider. "Think twice before you take that there because you might see that person five minutes later across your cube or by the water cooler."

Slack is a great place to compliment your coworkers.

While negativity has no place in the workplace, Slack can also be a good venue to send your coworker a positive note. Since Slack messages live on for weeks, you can memorialise an accomplishment by posting about it in your team's main chatroom, Taylor said.

Plus, upper management reading those messages get a chance to view your team's good work the next time they check through your messages.

"You're memorialising your communications with Slack," Taylor said. "What an opportunity to pay a kind word and memorialise it in this venue."

Don't over do it with emojis.

As with acronyms that used to stay in your text messages, emojis have also entered your office lingo - and that's not always a bad thing, Kerr said.

A "thumbs up" emoji can be a great way to tell your boss you received their message or you agree with their statement without sending another notification, he said. Taylor, too, said a "smiley face" emoji tells your coworker you are being friendly.

Yet sending a string of eight emojis in a row that "people have to decipher like it's hieroglyphics" won't cut it in the workplace, Kerr said. "Be careful of getting too cutesy with them the way you might on a text message with a friend."

And if you're speaking with a senior leader at your company, or conveying a serious message, avoid emojis at all costs. "This is still about having a professional dialog," Taylor adds.

Use miscellaneous Slack channels to make friends around your office.

When you first get a new job, you don't want to be overly eager for friendship before getting a chance to settle down in your role, Cenedella said. After getting situated, though, you can start branching out and trying to make friends.

Slack can help with that.

Often, companies have miscellaneous Slack channels for specific employees, such as those for parents, college alumni, and remote workers. These channels are a great way to get friendlier with your colleagues.

Some companies even have "fun" channels for cat-lovers or NBA fanatics that are designed to get you to speak more candidly about the topics you're passionate about. In these spaces, you can use more colloquial language than with your boss or in the main channel.

"You probably don't want to be sharing in your first week, you know, your favorite Old Town Road memes," Cenedella said, referring to the hit song by Lil Nax X. "But if there's a channel called #BillieEilishForever, you can probably be a little bit more relaxed and casual in that channel as you chat with other people who follow Billie Eilish."

Don't send your colleagues a bunch of Slack messages when you could just use one...

When I text my friends, I tend to send out five to six small messages at a time:

"hey" "what's up?" "by the way do you know where Cristina is?" "i saw her Instagram story about being in New York but I don't know where she's staying" "i want to see if she can hang out with us on Friday!"

Over Slack, however, sending lots of tiny messages is a big no-no, Kerr said. Quickly sending people a bunch of messages - which he refers to as "Slack bombing" - sends them lots of notifications for no reason, and distracts them from a more urgent task.

"It's really annoying for people," Kerr said about Slack bombing. "Remember, it's not texting."

... and don't send big blocks of text over Slack.

In the same way you don't want to Slack-bomb your coworkers with a bunch of tiny messages, a big block of text can be an eyesore.

Kerr describes Slack as between a text and an email. If you're sending a lengthy message that requires a detailed response, or if you need to write in complete paragraphs, simply emailing your coworker will suffice.

"I think it's important to remember that the purpose of Slack ideally is to cut down on email use," he said. "[Slack] is not quite as formal as or as structured as an email might be."

Taylor, too, says that if you are going off on a tangent about a subject over Slack, you risk "putting everyone to sleep in the chat room."

"You should put that in an email," Taylor added.

Be wary of slang.

While many people have certain colloquialisms they use with friends, slang comes and goes quickly, and not everyone is up to the latest trend.

Take "on fleek," Cenedella said. The phrase, meaning "cool," hit mainstream popularity back in 2015 - so much so that The New York Times, Quartz, and other publications had to break down the term. Nowadays, young people have moved on to "yeet" and "stan."

"It's not like you have to avoid [slang] altogether, but the latest and greatest slang comes and goes away pretty quickly."

Tailor your speech to who you're talking to.

Most of us speak to colleagues we would see at happy hour much more colloquially than we'd talk with a company's CEO.

Over Slack - just like in person - the same communication differences hold up, said Cenedella. It might be okay to slip in acronyms like "LOL" or talk more casually if you're chatting with your close coworker, especially if the company culture is one where everyone is working at a startup three years out of college.

But type as professionally as possible with your boss or another senior executive.

"There's not really one universal right way to use Slack," Cenedella said. "You've got to follow the cues of your particular office."

Related Links
A festival is banning beers with names like 'Dizzy Blonde' and 'Slack Alice' to stop alienating...
The ex-Amazon employee who allegedly hacked into the 5th largest credit card company in the US...
With 13 million daily active users, Microsoft says its Teams chat app is now growing faster than...
Next on Business Insider
TikTok is being sued after two young US girls died while copying the 'blackout challenge', report says