He earns approximately R745 million a year, according to Forbes, and is known for his relationships with some of the most famous women on the planet - most recently Nicki Minaj, who he went ATV riding with in Dubai, but also singers like Rihanna, Rita Ora, and Nicole Scherzinger in the past.

If that's not enough, his vehicle collection is also ridiculous - and it's not just cars he likes to buy, drive, or be driven in, either.

Keep scrolling to see the most expensive, rare, and bizarre vehicles Hamilton drives when he's not racing.

This is British racer Lewis Hamilton, who was recently crowned Formula 1 world champion for the fifth time. 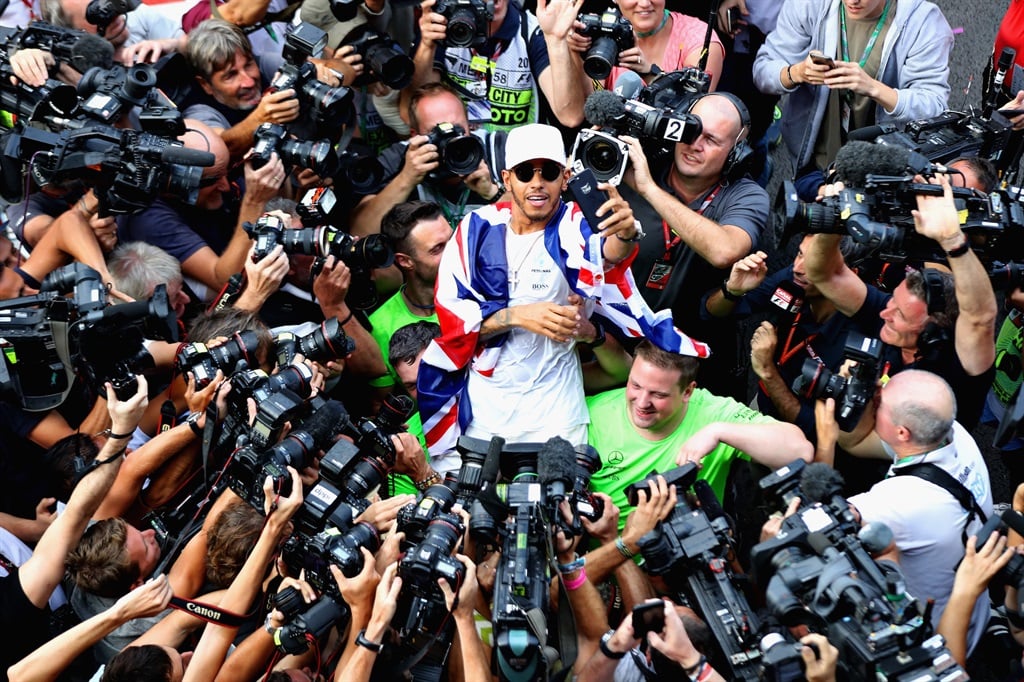 The view from Hamilton's office window typically looks like this. He has a cockpit that offers very little space, and he hurtles around a race track at speeds of 321km/ph. Hamilton, a Mercedes athlete, drove the company's F1 W09 EQ Power+ car in the 2018 season, but it's not the only vehicle he gets his mitts on. Hamilton passed his driving test in 2002 and bought his first car — a second-hand Mini Cooper not too dissimilar to the model Mr. Bean made famous in the British sitcom featuring Rowan Atkinson. Before long, Hamilton was lent a Mercedes C 200 by a dealership which he said was "very cool" and popular "with the ladies" when he was only 18. The second car he bought was a bit of a step up, as he purchased a Ferrari 599 GTO, a vehicle he only recently sold.

These days, Hamilton can pick and choose from a wide variety of vehicles when he's not racing. One of the cars he has in his collection is a rare Pagani Zonda 760LH which he uses to drive through the hairpin bends on Monaco's streets. If you think Hamilton likes this car, you might well be wrong. "The Zonda is terrible to drive," he once said. "It's the best-sounding car I own, but handling-wise it's the worst." Listen to the sound it makes in the video below.

For this weeks #monacomonday its a special one !! We have Lewis Hamilton driving his insane Pagani Zonda 760LH through monaco ?? ?? Video via LKhorizon #lewishamilton #supercarsoflondon pic.twitter.com/zhk1XX5ark

Here's another look at his Zonda.

Hamilton also owns a gorgeous 1967 Shelby Mustang GT500. For Hamilton, this car is "beautiful" but "a heap of junk." He said: "I’d seen Steve McQueen drive a Mustang in Bullitt. The company did a good job on the paint job, but the rest of the car just isn’t very good, so I never drive it."

In a 2017 interview with Formula1.com, Hamilton was asked which car he'd use if he could only ever drive one on the road ever again. "Probably the Mercedes SL 300 Gullwing," he said. Looking at it below, it's not a bad choice — but the only problem here is that it is a car Hamilton does not yet own. Hamilton has three cars that he's chauffeured around in: a Mercedes-Maybach S 600, a Mercedes GL 63, and a Cadillac Escalade. But if that were not enough, there's actually another Maybach that Hamilton is desperate to own and that is the all-electric Maybach 6, which has a top speed of 250km/ph and can accelerate to 100km/ph in under four seconds. Again, Hamilton has a problem… it is a concept car, and therefore not even on the road — yet.

The Brit clearly loves his Ferrari LaFerrari — he even bought two. One is a white LeFerrari Aperta, which could fetch anywhere between $2.5 million to $10 million if sold today, and the other is a classic red hardtop, which he used to take pop king Justin Bieber for a cruise around Sunset Boulevard, Los Angeles in 2016.

Bieber also posted a photo of him sitting on the car bonnet on Instagram. Though he drives for Mercedes now, he used to represent McLaren. He was snapped in the P1 supercar — which can cost anywhere from $1 million to $2 million — in 2015, and nobody was more delighted than McLaren who used the photo to score social media points. "Nice to see you still like McLaren cars, old friend," the manufacturer tweeted.

It can't be all Pagani, McLaren, or Ferrari, though. Hamilton does drive for Mercedes, after all, so it's no surprise that he owns a Mercedes SLS AMG, a car he acquired in 2014. Obviously, this isn't a standard SLS. It has an additional 59bhp under the hood which boosted this 6.2-litre V8 to 622bhp. It also has a top speed of 315km/ph and can go from 0-100km/ph in 3.5 seconds. He's also driven the Mercedes AMG GT R. "I was surprised it was street legal," he said. … snowmobiles on top of mountains… … the MV Agusta F4 LH44, a MotoGP style motorbike that turns heads when it burns rubber in Monaco… … and he might even favour a helicopter, though it is unlikely he actually pilots this one. And what multi-millionaire champion would Hamilton be if he did not have his own Bombardier Challenger 605 private plane that he "pimped out" in red because white planes are just boring? He has one rule — take your shoes off after you've boarded the $15 million jet. Here's a side view:

Related Links
Goodyear is testing a special tyre store for women that looks like a trendy hair salon
Watch: how Hollywood shoots car chases
13 hot new electric SUVs
Next on Business Insider
China rebuts NASA chief's claim that the country is trying to land on and occupy the moon