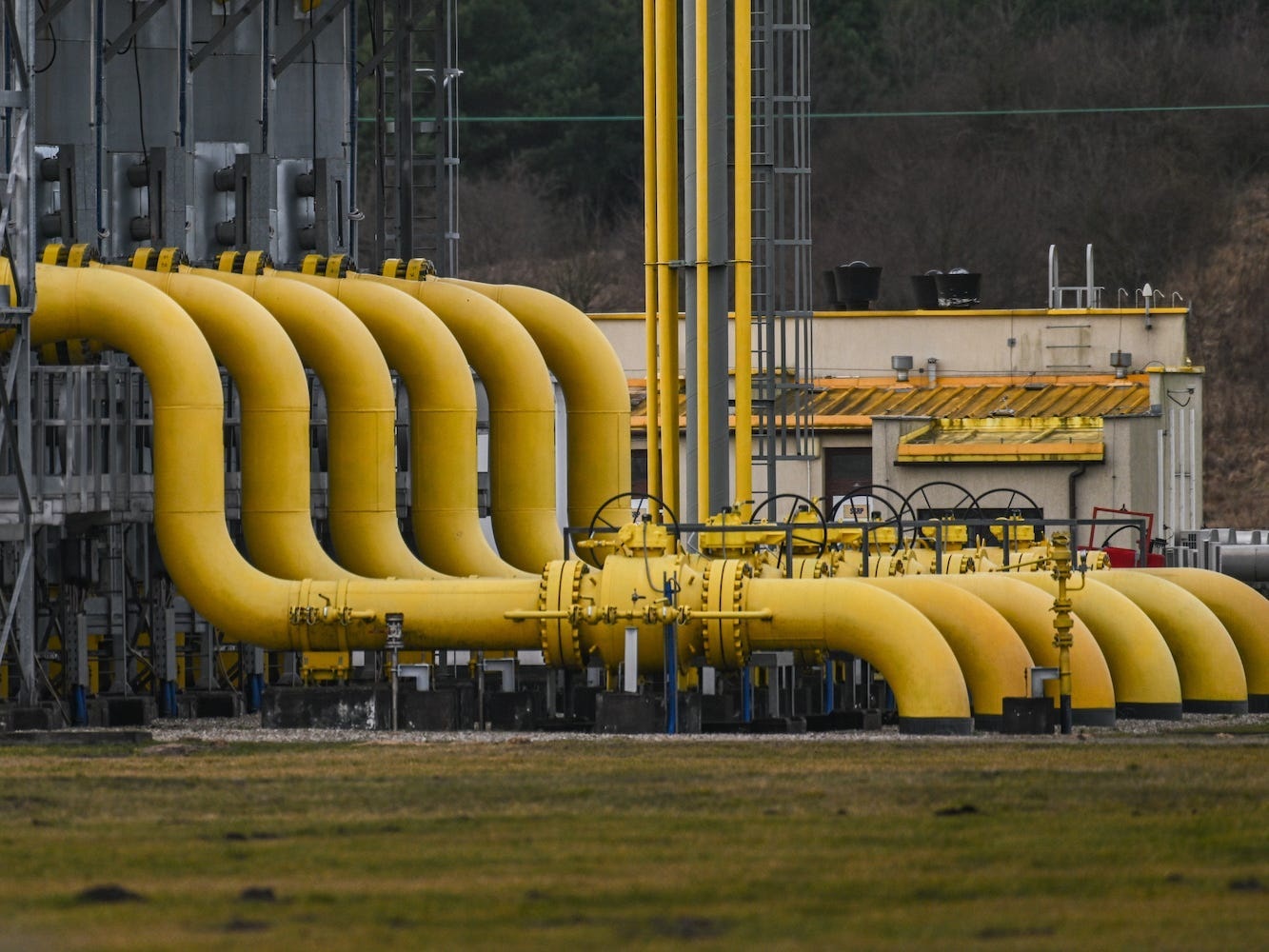 The EU relies on Russia for 40% of its natural gas. Omar Marques/Getty Images

The euro rebounded while European natural gas prices sank Thursday, after data showed flows of fuel had resumed along a key pipeline between Russia and Germany.

The return of flows via Nord Stream 1 temporarily eased fears of an immediate energy crisis in Europe that could plunge the entire region into recession.

Network data from Nord Stream, the operator of the 759-mile pipeline that delivers Russian natural gas to Germany and other parts of Western Europe, showed operations had resumed Thursday for the first two hours of the day.

The pipeline, which delivers roughly a third of Europe's natural gas, had been closed for seasonal maintenance for 10 days to Thursday. While such closures are routine, Russia had already been pumping just 40% of the normal amount of gas prior to the maintenance work, in retaliation for the European Union's raft of sanctions over its war in Ukraine.

Europe relies on Russia for around 40% of its natural gas, although individual countries, such as Germany, are even more heavily dependent. With consumers and manufacturers in the region grappling with inflation at multiyear or even record highs, yet another spike in energy prices could unleash an unprecedented crisis.

"Gas is flowing again! But an acute energy crisis has by no means been averted. On the contrary — the EU yesterday called for a significant reduction in gas consumption of 15% over the next eight months and is threatening mandatory rationing," Commerzbank strategists said in a note.

The price rose to as much as 345 euros immediately after the invasion of Ukraine in late February, and it has since receded to around 100-150 euros. But it's still up 400% this year, as supply has been choked off and alternative sources have been hard to come by.

The euro, meanwhile, posted its biggest daily increase against the Russian ruble, rising by 1.5% to 56.70 rubles, according to Bloomberg data. It was up 0.5% against both the dollar and the yen.

The single European currency has struggled to hold above $1 over the last week, after dipping below that point for the first time in 20 years. The euro has come under pressure from a divergence in interest rates in the US and the eurozone, where the European Central Bank is widely expected to deliver its first rate rise in 11 years later Thursday.

Even though gas was flowing again, Russia has already indicated that yet more repair work on the pipeline will mean that the amount delivered is likely to drop to around 20% of normal levels, meaning the euro — and Europe's economy — are nowhere near out of the woods.

"With inflation already at record highs across the euro area, at a record 21.9% in Estonia, at 19.3% in Lithuania and at a much lower 6.5% in France, it's clear that headline interest rates need to go up from their current -0.5%, but by how much, as the region heads towards a bigger energy crisis in the autumn," CMC Markets chief markets strategist Michael Hewson said in a note.

European countries are scrambling to find alternative sources of fuel, such as by firing up idled coal and nuclear power stations, as gas grows scarcer and prospects dwindle of filling the region's storage facilities to the 90% level needed to meet winter demand by early October.