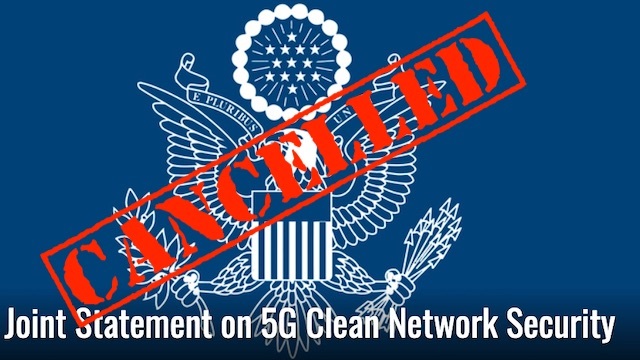 Eswatini has reportedly cancelled its enthusiastic promise, less than two weeks old, to join a US "Clean Network" initiative, part of the former Trump administration's fight against Chinese technology companies.

The country said it was withdrawing a joint statement made with the USA "due to legitimacy issues surrounding the approval process of the document," reported TechCentral.

The publication had been told that Princess Sikhanyiso Dlamini, the eldest daughter of absolute monarch King Mswati III, stepped in to reverse the announcement, said journalist Duncan McLeod, without identifying a source.

The United States had reached its agreement with Eswatini's acting minister of information, communications and technology,  Manqoba Khumalo, who moved into politics after a long career with Coca-Cola, outside of Swaziland. He was appointed by then Swaziland's commerce and trade minister in 2018, while Dlamini was handed responsibility for the technology portfolio.

Dlamini is considered a power player within the Eswatini royal household,

The Clean Network initiative's sole practical focus is to prevent equipment made by Chinese manufacturers such as Huawei and ZTE from being used in 5G networks in particular. According to the United States – under former President Donald Trump – those companies "are required to comply with directives of the Chinese Communist Party", which presents a threat to American national security.

The companies deny any such allegation.

On 15 January, the USA and Eswatini announced that the latter had become the first African country to join the pledge.

In the statement, Khumalo expressed the kingdom's enthusiasm for the plan.

"The Clean Network provides a trusted foundation for countries and companies to ensure the security of their most sensitive information," the document quoted him as saying. "Eswatini is proud to be a member of the Clean Network."

The United States, meanwhile, said the agreement "paves the way for expanded US private sector investment", and noted "respect for sovereignty" as one of the principles underpinning its relationship with Eswatini.

The USA had, previously, held a dim view of Swaziland's treatment of nascent opposition political movements, and the lack of effective freedom of speech, among other issues.

The Clean Network plan was launched under the administration of Donald Trump while he personally led a charge against Chinese companies on several fronts. His successor, Joe Biden, was sworn in five days after the Eswatini announcement. He is expected to take a different approach to relations with China – and possibly mobile phone network security.

MTN is the dominant network operator in Eswatini. Though it acknowledged questions from Business Insider South Africa about the impact of the ban, it never responded.

Related Links
Eswatini has vowed to ban Chinese companies from its cellphone networks
eSwatini is shooting for 100% coronavirus vaccine coverage at R200 per person
Taiwan has just one diplomatic ally left in Africa and China is eagerly eyeing it
Next on Business Insider
South Africans – rich and poor – are eating less bread, the maker of Albany says