As Eskom continues to grapple with unplanned outages, these graphs show why a breakdown at Medupi could cripple South Africa

It's been one of Eskom's busiest months yet with the resignation of Eskom chair Jabu Mabuza, a fire at a transformer which plunged OR Tambo International Airport into darkness, and the implementation of Stage 2 load shedding on Saturday – while it fights a rear-guard action against rumours that Stage 8 might be on the cards.

Further load shedding uncertainty looms as the state utility continues to grapple with yet more unexpected outages on Monday and Tuesday. Eskom released statements saying it was managing to keep the grid stable - but only just - with some 13,800 megawatts (MW) offline on Monday and 11,723MW lost on Tuesday.

While Eskom said it will continue to try to keep the lights on, things will become far more strained as more South Africans return to work and business returns to normal this week, with the additional electricity requirements it brings.

The state utility says it has about 42,700MW of power generating capacity. But that is stretched thin due to an ageing fleet of coal stations, which make up the majority of the country's electrical generation.

This is what Eskom's energy mix looks like – and why a single big breakdown at Medupi can plunge the entire country into crisis.

Eskom has some 55,500 megawatts (MW) of total maximum generating capacity – in theory.

Drawing on data published by the department of public enterprise, the office responsible for buying electricity from independent power producers (IPPs), and Eskom statements, the state utility has some 55,500MW of nominal (overall total) capacity. While this number does not necessarily translate into actual power available on the grid at any one time, it provides an idea of would happen if every power station was online at once, all running at 100% efficiency.

That total comes mostly from 15 coal-fired and one nuclear power plants. The remainder is from peaking stations (power that can be quickly put onto the grid during peak demand) comprising of 4 gas-to-liquid fuel turbine stations, 3 pumped-storage schemes, and 2 hydroelectric stations. There is also 1 wind farm, plus independent power producers as well as imported electricity.

Here is the capacity for each of those plants – and what Eskom says each plant is actually producing.

Here is just the coal stations plus the Koeberg nuclear power station. According to Eskom’s weekly system status update, it had an installed capacity of 47,000MW at the start of 2020. The capacity number shifts weekly depending on which units are online and offline, with planned maintenance necessary at every turbine eventually. The current numbers include "bonus power" generated from units at Kusile, the massive sister station to Medupi, that have been synchronised to the grid but are not formally in commercial operation yet.

That leaves just over 30,000MW for actual daily use – if things work as they should.

In the next three months planned outages will be around 7,000MW as the utility prepares for winter, and its big electricity demands.

This is why electricity is rationed via load shedding.

When unplanned outages exceed the 9,500MW budget and demand on the grid peaks, the shortfall is made up by switching off power to some users instead of letting the grid collapse, disastrously, as users try to pull more power out of it than there is to be had.

The state utility has not managed to keep unplanned breakdowns at below that 9,500MW level - the level at which it is forced to consider load shedding during peak hours - since December 4, 2019. The number, which as of Tuesday was 11,723MW, hasn't translated into load shedding because demand was low during the Christmas holiday season.

As South Africans begin work in earnest the margin between peak demand and unscheduled breakdowns will become more critical. Especially since Eskom’s energy availability factor has seen the worst year in 2019 in four years, according to data collected by energy expert Chris Yelland, of EE Publishing.

Here is why Medupi alone can cripple South Africa. Coal is a massive part of Eskom's energy mix, and a handful of power stations – such as Medupi – are critical within that coal generating side.

Eskom's coal-fired station fleet is mostly old, and has seen little in the way of proper maintenance over the last 12 years, because supply was too tight to shut any down for long periods of time.

The brand new Medupi should not require such shut-downs, so should provide a pretty reliable 4,000MW chunk (since its unit 2 came online in November) of the 41,798MW in coal power generated.

But it isn't reliable, and every time Medupi shuts down, whether due to a broken conveyor belt or wet coal, it immediately throws the country into a state where where load shedding becomes much, much more likely. 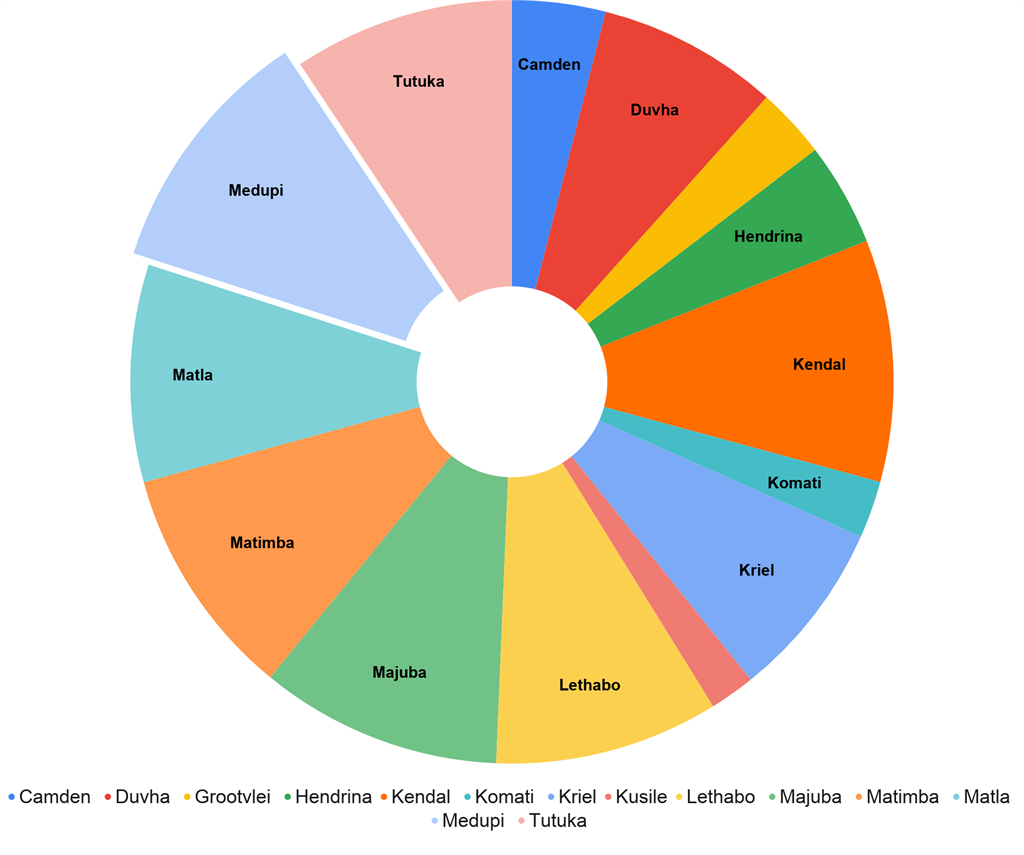 There is some good news: more power is coming onto the grid.

Eskom told Business Insider that Medupi Unit 1 is currently synchronised and providing 400MW worth of bonus power to the grid, which isn't included in the overall numbers because it is yet to be commercialised. Likewise, Kusile's Unit 2 and Unit 3 are also synchronised to the grid and providing "bonus electricity" when operated.

If Eskom can stick to its schedule, this is how power will come online from the two new giant power stations: The there is almost 2,600MW of independent-producer power, renewable energy, which will be connected to the grid as part of the IPP bid window 4, the last bid to be signed off by Eskom.

Read more: These are the biggest green energy projects in SA - all wind farms

But all of that is not enough to get SA out of trouble entirely.

Other than Medupi and Kusile plus the new independent producers, there is not much in the way of new power coming to the grid any time soon. Government has laid out plans for more electricity generation in its Integrated Resource Plan (IRP 2019), but those projects are not even out on tender yet, and will take years to complete.

Medupi’s Unit 3 is also due to be offline for a design modification, which will knock off some 800MW of power currently available. The maintenance was delayed in January due to the system being constrained, reported SowetanLive.

Government needs electricity fast. Industry and experts are calling for:

Government has been slow to commit to the regulatory changes necessary – but the pressure is mounting.

*the overall maximum capacity of Eskom was amended to include imported electricity.