WATCH: An escaped racehorse burst into a bar in France, sending patrons fleeing 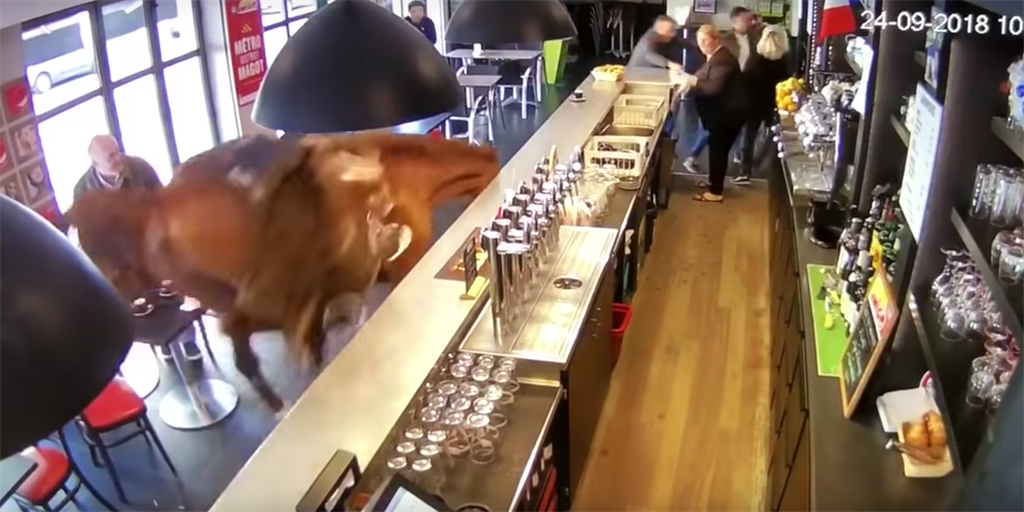 An escaped horse burst into a bar in Chantilly, France, causing a disturbance last month.
YouTube/Jasmin Stephane
A racehorse escaped and burst into a bar north of Paris last month in an incident that reads like the beginning of a joke.

It was around 10 a.m. on September 24 when the filly escaped her trainer as she was being led from a stable to a nearby racecourse.

The horse then sprinted for about a kilometre before coming across a nearby bar.

Bartenders and patrons at the PMU bar (which stands for Pari Mutuel Urbain, France's national betting system) saw the escaped horse galloping their way but didn't think it would enter the restaurant, which had its door slightly ajar.

Security footage uploaded to YouTube by the bar's owner, Stéphane Jasmin, shows the moment the horse came bucking into the bar, sending everyone inside fleeing and ducking for cover.

Once the horse reaches the rear of the bar, it turns around and sprints back out again, knocking over tables and chairs. Luckily, no one was injured.

"There was quite a panic. I still can't quite believe it happened," Jasmin told Reuters.

The horse's trainer, Jean-Marie Béguigné, told the Ouest France newspaper that the filly in question has "a penchant for escape."

The horse was caught at a nearby parking lot.