These 23 animals that are in danger of disappearing forever A rhinoceros subspecies is almost extinct.

Sudan - who is named for his country of birth and lived under the protection of armed guards at the Ol Pejeta Conservancy in Kenya, away from poachers - suffered from a degenerative muscle and bone condition and was euthanized.

Fortunately, scientists were able to gather genetic material that could one day be used to create more northern white rhinos through IVF. Sudan also left behind a daughter and granddaughter, so there's a flicker of hope for the wildlife preservation community.

Even so, there are numerous other animal species and subspecies that are in danger of perishing for good. The Amur leopard and Sumatran elephant are just two of 19 species categorised as "critically endangered" by the World Wildlife Fund, while the white-rumped vulture, Philippine crocodile, and Chinese pangolin have been given the equivalent classification on the IUCN Red List.

Keep scrolling to see 23 animals that are on the verge of extinction.

The Amur leopard is one of the world's most endangered wildcats, and native to the Russian Far East. This subspecies - which is also known as the Far East leopard, the Manchurian leopard, or the Korean leopard, despite being nearly extinct outside of the Amur River basin in eastern Russia - can run upwards of 37 miles an hour and jump as high as 19 feet in the air.

According to a 2015 census, there are only around 60 Amur leopards left, all living at Russia's Land of the Leopard National Park.

In the the past 60 years, there has been a 50% decline in the Bornean orangutan population. Found only on the island of Borneo, Asia's largest island, Bornean orangutans have broader faces and shorter beards than their arboreal Sumatran cousins.

There are three subspecies of Borean orangutans: Northwest, Northeast, and Central. The largest is the Central subspecies, of which there are an estimated 35,000. The most threatened is the Northeast subspecies: due to its habitat being decimated by logging and hunting, there are only about 1,500 extant Northeast Borean apes.

Scientists predict that the Bornean orangutan population will fall another 22% by 2025, bringing the total number down to 47,000.

It was once believed that mountain gorillas would be extinct by the end of the 20th century. At just under 900, the current population size is low, but conservationists are working to ensure that mountain gorillas don't fall prey to human threats.

According to the African Wildlife Foundation, the greatest threats to mountain gorillas - an eastern gorilla subspecies - are political instability (mainly conflicts in the Democratic Republic of Congo), human encroachment, and forest degradation.

The saola, or "Asian unicorn," wasn't discovered until 1992. Native to a mountainous region of Vietnam and Laos, "saola" means "spindle horns" in Vietnamese.

Like antelope and bison, the saola belongs to the ruminant artiodactyl family Bovidae. According to the World Wildlife Fund, this enigmatic creature is super rare - scientists have only documented wild saola on four occasions.

Despite their international protected status, hawksbill turtles are killed for their prized shells. This sea turtle, which has a hawk-like pointed beak, can be found in tropical oceans around the world.

Humans pose a large threat to hawskbills, whose population has decreased by 80% over the last century. Despite their protected status under the Convention on International Trade in Endangered Species of Wild Fauna and Flora, people still eat their eggs and kill them for their flesh and colourful shells. They're also susceptible to being ensnared in fishing nets.

The South China tiger population is functionally extinct, meaning these wildcats are only found in captivity. Back in the 1950s, there were an estimated 4,000 South China tigers. Although China banned poachers from hunting these wildcats in 1979, the population dipped to between 30 and 80 by the end of the 20th century.

About 100 tigers remain in captivity, Bloomberg reported in 2016.

The Yangtze finless porpoise is as intelligent as a gorilla. The Yangtze porpoise, native to China's longest river, is a close relative of the most-likely-extinct Baji dolphin.

It's estimated that between 1,000 and 1,800 of these intelligent, mischievous-looking porpoises remain.

Prior to 2012, the Sumatran elephant was "endangered," but not critically. The Sumatran elephant thrives in lush forests and can weigh up to five tons.

In 2012, the species was categorised as "critically endangered" by the WWF. Due to habitat decimation, half of its population was lost over the course of one generation, and the WWF estimates that between 2,400 and 2,800 remain.

The population of Sumatran orangutans, which live in the trees of tropical rainforests, is down to about 14,600. Several tree species would disappear if Sumatran orangutans die out, as the animals play an important role in seed dispersal.

Fires and deforestation, however, are continuing to decrease this animal's habitat. Orangutans are also victims of illegal trafficking.

The number of black rhinos in Africa has decreased dramatically in the past century. Fewer than 2,500 black rhinos existed in 1995, a 98% drop compared to 1960. 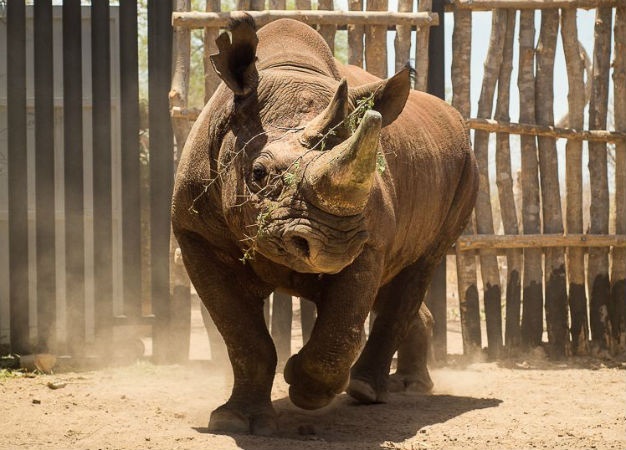 The black rhino population has increased somewhat since then, and there are 5,000-5,400 black rhinos in the world today.

However, poaching and trafficking of rhino horns still prevents the species from recovering to early 20th-century levels. The WWF says rhinos are some of the oldest mammals in the world, and efforts to protect them benefit other species too, including elephants. 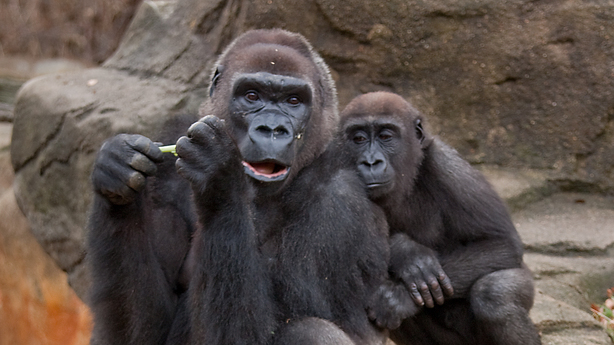 According to the WWF, the number of western lowland gorillas has decreased by at least 60% in the past 20 or 25 years.

Poaching and disease are the primary threats - the Ebola virus is still prevalent, and some scientists say it has killed about 33% of the wild gorilla population, mainly targeting the western lowland gorilla.

Ebola also makes poaching dangerous for people, as the virus could spread to humans who handle gorilla meat.

Less than 400 Sumatran tigers still exist, and they can only be found on Sumatra, an Indonesian island. Poaching leads to nearly 80% of Sumatran tiger deaths, and there is no proof that poaching has gone down much in the past two decades, according to the WWF.

Deforestation also triggeres a deadly cycle - as habitats are destroyed by human activity, tigers look for food elsewhere and are more likely to run into humans as they move away. They may attack livestock or harm people, and villagers in turn kill more tigers in retaliation.

Eastern lowland gorillas are found in the tropical rainforests of the Democratic Republic of Congo. Scientists say civil unrest has made it impossible to accurately estimate their population. Humans have destroyed a large chunk of this gorilla's habitat to create space for livestock and farmland. Protected areas, such as Kahuzi-Biega National Park, cover a very small fraction of the gorilla's range.

Conservation efforts have been tough to execute due to military activity in the region, and illegal mining is also harming the species by attracting more people who hunt the gorillas.

There are no more than 70 Javan rhinos left in Indonesia.

The Javan rhino used to exist in larger parts of Asia, but it now roams in only one location. The population is so small that the lack of genetic diversity could make long-term survival very difficult.

Javan rhinos all reside in a national park that is vulnerable to tsunami and rising sea levels.

Scientists estimate that only 200-300 cross river gorillas are still out in the wild, primarily in Cameroon and Nigeria. These gorillas live in an area that has seen increased human activity in the past several years, from forest clearing for timber use or agriculture.

Although hunting and killing cross river gorillas is illegal in Nigeria and Cameroon, some people are not deterred, particularly because wildlife laws are not strictly enforced.

The population of Sumatran rhinos is very unstable, and only 80 are estimated to still be alive. This rhino used to roam parts of Bhutan and eastern India, and scientists believe it was found in Vietnam and China as well. Now, the Sumatran rhino only exists in Borneo and Sumatra.

Poaching has increased in the region due to an increase in demand for rhino horns. In addition, deforestation, road construction, and the presence of invasive species have all contributed to a dwindling habitat for Sumatran rhinos.

Malayan tigers are threatened by road development and logging operations. There are only 250 or 300 left in the world. As forests get converted to farmland, tigers come into increased contact with livestock. According to the WWF, angry villagers or authorities often kill tigers that come near agricultural spaces.

Orangutans, which share 96.4% of humans' genes, have a very low reproductive rate. Females give birth to one infant only every 3 to 5 years. The orangutan is Asia's only great ape, and a series of agricultural plantations are steadily reducing their habitat.

Orangutans are slow and large, which has made them easy targets for humans. People kill these animals either for food or in retaliation when orangutans are spotted in agricultural areas.

The vaquita is the world's rarest marine animal. The vaquita, the world's rarest marine animal, was first discovered in 1958. As few as 30 of these cetaceans (an order of animals that include whales, dolphins, and porpoises) remain in the wild, according to the WWF. This represents a decline of more than 92% since 1997.

Similar to the Philippine crocodile, they also fall prey to entanglement, though, confined to the Gulf of California, climate change might also have a negative impact on their ability to persist as global warming could impact habitat conditions and the food chain.

The Philippine crocodile population is down to 200 in the wild. 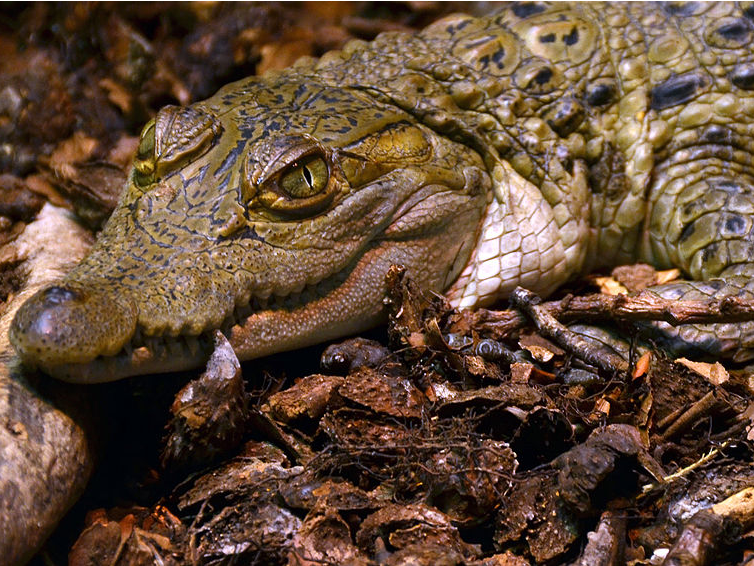 Fewer than 200 adult Philippine crocodiles are believed to exist in the wild. The crocs are the victims of habitat loss and entanglement in fishing equipment.

The white-rumped vulture has declined faster than any other bird species. Possibly already extinct in southern China and Malaysia, the IUCN states that the white-rumped vulture has suffered "catastrophic decline."

Mother Nature Network reports a 99.9% decline since the '80s - the swiftest of any bird species in recorded history - and attributes it to a toxic veterinary drug that the vultures ingest when they consume cattle carcasses.

The Chinese pangolin is poached for its meat and scales. 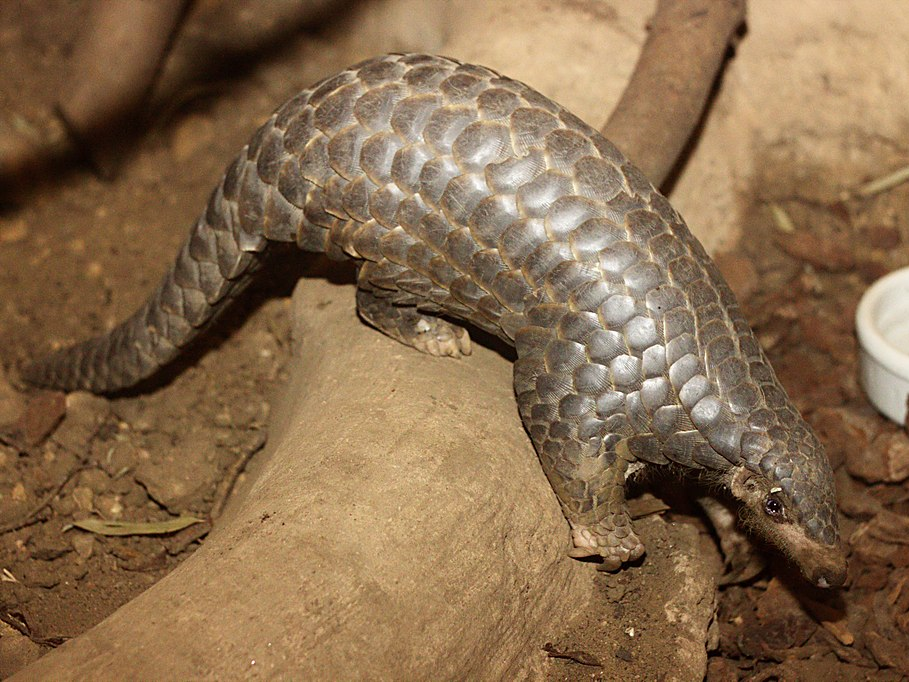 The Chinese pangolin - native not just to China but to other regions in Asia such as the Himalayan foothills of Nepal and northern parts of India - is listed as "critically endangered" on the IUCN Red List.

The scaly anteater, hunted for its meat and scales, is the most trafficked mammal in the world according to CNN. An estimated 100,000 are captured every year.

The Arboreal Alligator Lizard, found mainly in the forests of Central America, is threatened by continual habitat destruction. According to the International Reptile Conservation Foundation, the alligator lizard is "severely endangered" due to habitat destruction and degradation and to illegal collection for the international pet trade.

Reptiles magazine reports that they're found in just a few select locations, mainly the forests of Guatemala and Mexico, and that they produce only one litter of offspring each year.

"There are some species [of the lizard] that may already be extinct," reports the magazine.