If you've ever led a team at work before, you know how hard it can be to keep people motivated.

But one Japanese startup is using technology to make that easier than ever.

The Tokyo-based company Attuned offers what it calls "predictive HR analytics" to help companies understand what makes each of their employees tick. And companies in Japan are paying thousands of dollars for the chance to get a better read on their workers.

It's a simple process: When a company signs on with Attuned, its employees take a 55-question online test in which they're presented with pairs of statements, such as "Planning my day in advance gives me a sense of security," and "I prefer to be able to decide which task to focus on at any given time." The test-taker must choose which of the two statements applies to them better, and whether they "strongly prefer" it, "prefer" it, or just "somewhat prefer" it: 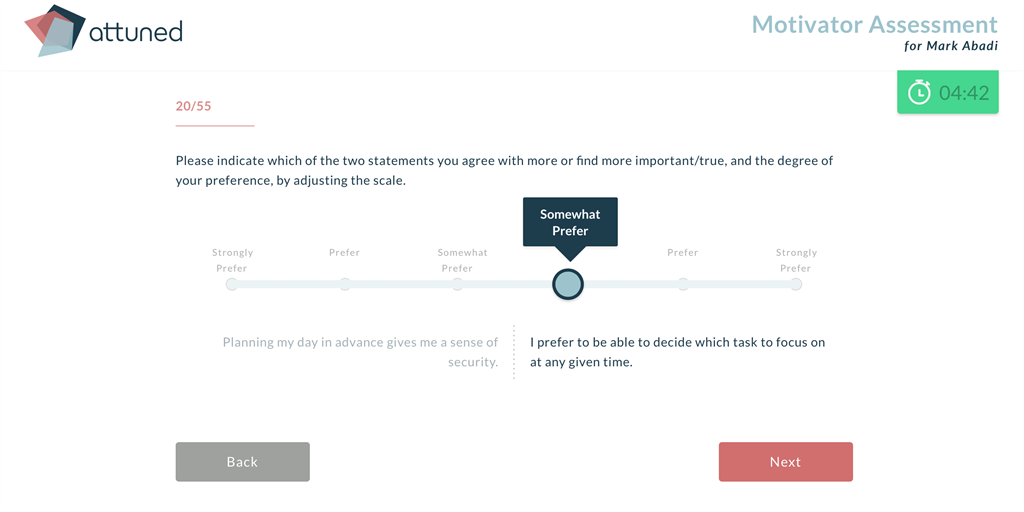 Once the test is complete, Attuned churns out a unique "motivational profile" scoring each employee in 11 key human values, including "competition," "feedback," "autonomy," "security," and "financial needs."

Areas in which the employee scores particularly high are labeled "need to have" motivators for that person, while lower scores indicate "nice to have" or "neutral" motivators. How each employee scores in certain areas can clue managers in to what kinds of work environments they'll thrive in and what will keep them motivated, Casey Wahl, the American founder of Attuned, said.

"Maybe it's, 'Hey, you want to have drinks on a Friday night?' if socialization is important for you," Wahl told Business Insider. "For somebody else it's different. Maybe it's a financial incentive, or maybe, say, 'OK, if you nail this product, you can have more autonomy; you can run this project that you've been wanting to do for a while."

The survey brings managers and their employees to common ground

The technology can also help managers find common ground with their workers. Wahl recalled an employee of his who took issue with the location of Attuned's office on a Tokyo backstreet instead of a more popular, high-trafficked area. As it turned out, the employee had scored high in the "status" category, suggesting a need to work for a well-known brand or in a position of prestige.

"This is something where, because I don't value it, I can't give her what she wants easily," Wahl said. "Now that I see this, I can say, OK, she's coming from this point of view. So it's going to take a lot of the emotion and everything out of it."

Read more: The progression of office culture from the '50s to today

Attuned charges $1,960 (R27 079) for a basic yearly subscription, with prices varying based on the size of the company. The subscription also includes "pulse surveys" - short, 30-second follow-up quizzes that employees take every two weeks to see how their motivators change over time. Attuned uses AI to tailor the surveys to the individual based on answers they've previously given.

Wahl says the surveys can identify faster than ever when workers are feeling less motivated, allowing managers to act before the workers get frustrated and leave the company.

At the hiring level, the technology can also predict which departments a prospective employee might be well-suited for, say, if they're motivated by high competition or require a lot of autonomy.

And they can help hiring managers recognize if someone might not be a good fit at all. Wahl said that after one client started screening potential hires with the Attuned test, its "mis-hire" rate - the percentage of new hires who left the company within six months - dropped from 35% to 8%.

"Management, up until now, has been art," Wahl told Business Insider. "And we're bringing some science to it."

Employees tend to have similar motivations across age, gender, and cultures

Wahl said the company spent more than two years working with a team of psychologists to write the test and whittle it down to something that would take 10 or 15 minutes to complete.

Interestingly, they found that there's no significant differences in what motivates people across age, gender, or even cultural lines: millennials value social relationships at work just as much as older workers, for example, and Japanese workers want feedback at the same rate as Americans, Wahl said.

There were some cultural differences to be accounted for, however. Wahl, who has lived in Japan for 18 years, said Japanese workers were less likely to say they "strongly" preferred a given statement, opting for the softer "somewhat prefer" option more than workers from other countries. He said Attuned localizes the data for each company to account for the difference.

Attuned's clients in Japan include Rakuten, the largest e-commerce site in the country, and Denso, the second largest auto-parts supplier in the world. The company is also beginning to attract clients in the Middle East, Russia, and the United States - two of its American clients include the Noonday Collection and San Diego's Church at Rancho Bernardo.