Preliminary economic indicators for emerging markets, which have shown signs of stabilisation after four quarters of weakness, could signal a "nervy test of the 'darkest before dawn' thesis" according to UBS.

The bank notes the recent stabilisation could signal a bottom for emerging markets, though Asian economic data continues to lag. Alongside the data, UBS reports the record 30-week streak of inflows into emerging market (EM) exchange-traded funds, which has injected some $57 billion (R800 million) of new money into the asset class, has ended. EM ETF outflows have been concentrated in Asia ex-Japan funds, signalling investor concern over China in particular.

On Tuesday, China cut its 2019 growth forecast from 6.5% to a range between 6% and 6.5%, which would be the lowest rate since 1990. The Chinese economic slowdown may be even more pronounced as many investors and market commentators have long been skeptical of official statistics.

According to Chinese bureau statistics chief Ning Jizhe, the weakness in China has been driven primarily by a slowdown in domestic demand, as opposed to the effect of the trade war with the US, as Beijing seeks to lower debt levels in the world's second largest economy.

The US and China implemented significant tariffs on each other's goods in 2018 affecting a variety of sectors in both countries. Recent reports of a resolution to this dispute has driven recent volatility in markets, with the two sides said to be in the "final stage" of negotiating a trade agreement. 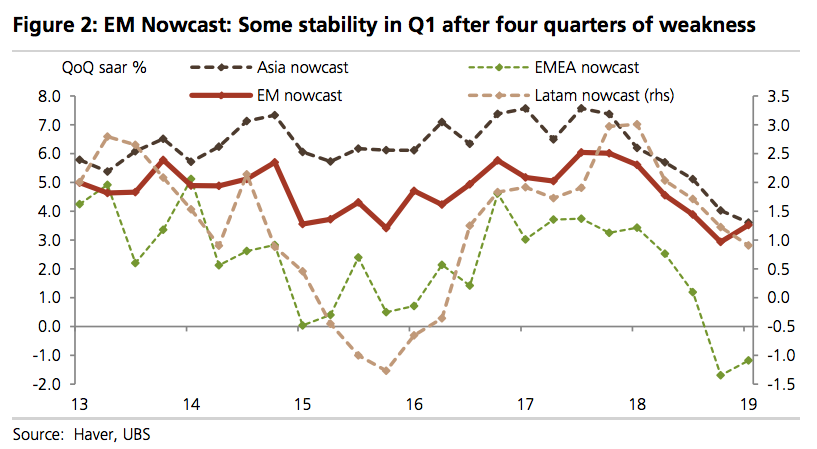 Whether the end of the EM ETF inflow streak represents a pause or a broader reversal remains to be seen. Several questions, including slowing global growth and the potential for increased trade disputes, overhang the asset class despite it seeing significant inflows in recent years.

EM equity outflows have also occurred alongside outflows in US equity funds, signaling a broader aversion to risk by investors despite double-digit returns in 2019 for both asset classes.

In spite of these factors, several experts on Wall Street are increasingly bullish on EM equities. Noted market commentators such as GMO's Jeremy Grantham and JPMorgan Asset Management's David Kelly have signaled their belief that EM equities will provide investors with strong returns in the years ahead, albeit with the risk of short-term volatility.

"I like emerging markets, particularly because, in this mess of changing variables, the asset-class level tends to be pleasantly old-fashioned," Grantham said in September. "When you're talking about an asset class as broad as emerging, and it measures so much cheaper than the US, you pretty well know that it's accurate."

Related Links
Shares in a mysterious Hong Kong firm have jumped 8,500% in 5 years, and no one really knows why
A herd of wild cows broke into a Hong Kong supermarket and started eating all its food
Cathay Pacific accidentally sold first class seats for a R200,000 discount – for the second time...
Next on Business Insider
World Bank warns a global recession looks inevitable as food and energy prices spiral