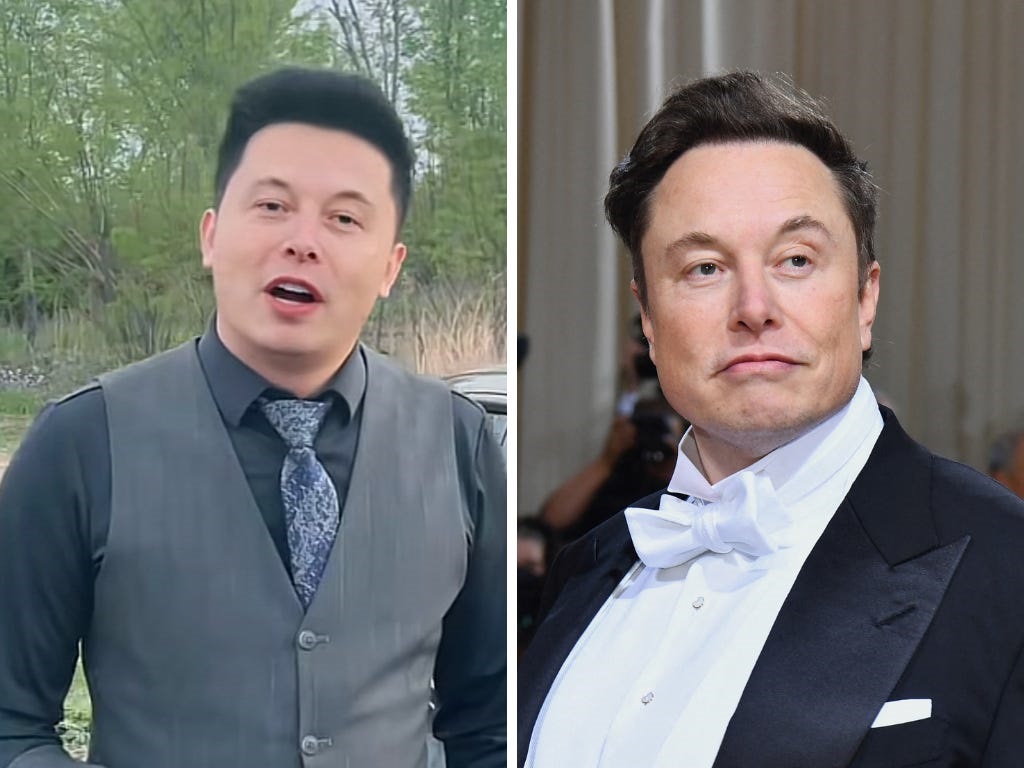 Yilong Ma (left) is best known for being Elon Musk's (right) Chinese doppelgänger — but he got suspended on China's Weibo and Douyin this week.
MaYiLong/TikTok; Angela Weiss / AFP via Getty Images

Elon Musk's viral Chinese doppelgänger Yilong Ma appears to have been suspended on the Chinese versions of TikTok and Twitter.

At press time, Insider saw that Ma's page on Douyin – China's version of TikTok – had been purged of all content. Meanwhile, a content restriction notification citing a violation of the platform's policies was slapped on Ma's page on Weibo, the country's Twitter-like platform.

At press time, Ma's page on the international version of TikTok, where he is known by the username "Elong Musk," was still active. Ma has just over 239,000 followers on the platform, with around 3.9 million likes on his videos.

"All platform videos are ported, I only have TikTok. I love you," read the profile description on Ma's TikTok page. "Ma first went viral on China's version of TikTok, Douyin, in November 2020 for videos that appeared to show a striking resemblance to Musk. He later attracted the attention of Musk when the Tesla and SpaceX CEO quipped in response to a clip of Ma that he, too, may be "partly Chinese."

Ma subsequently uploaded several videos on TikTok, including one where he expressed — in broken English — his thoughts on Musk's high-profile acquisition of Twitter. In this clip, he points excitedly at a printout of the Twitter icon, calling it "my bird!"

@mayilong0 This is a free bird. I like him and I'm going to go to him right now. Because Elon Musk is my brother#elonmusk#tesla#twitter? dance(256762) - TimTaj

Ma's latest video on TikTok is a photo compilation of him posing in front of a Tesla, captioned: "I want to take my brother for a ride in my Tesla! #elonmusk #tesla."

@mayilong0 I want to take my brother for a ride in my Tesla!#elonmusk#tesla? GASLIGHT - INJI

Ma's popularity later led to the Tesla CEO saying that he would like to meet Ma in the flesh if he proves to be a real person.

"I'd like to meet this guy (if he is real). Hard to tell with deepfakes these days," Musk tweeted.

"I am here. I want very much to see you too! I love you, you are my hero," Ma wrote in response to the billionaire in a post on Weibo.