Elon Musk's quest to become the most unorthodox CEO of all time took another strange turn on Tuesday.

The Tesla chief took to Twitter, telling his 22.3 million followers that he had funding in place to take his company private at $420 — a roughly 20% premium to the stock's Monday closing price. Not only was he specific on the price, but he also said funding was "fully secured".

Tesla's stock immediately hit intraday highs, spiking more than 8% for the session before trading was halted about 2pm ET. The shares resumed trading around 3:45pm ET and quickly set another new daily high, climbing as much as 13%. The stock closed at $379.57, up from $344 where it started the day.

See also: Elon Musk boosted his net worth by $1.4 billion with just one short tweet

In the end, Tesla added roughly $7 billion in market value on the day. The stock also received a boost shortly before Musk's tweet on reports Saudi Arabia's sovereign wealth fund acquired a $2 billion stake in the company. 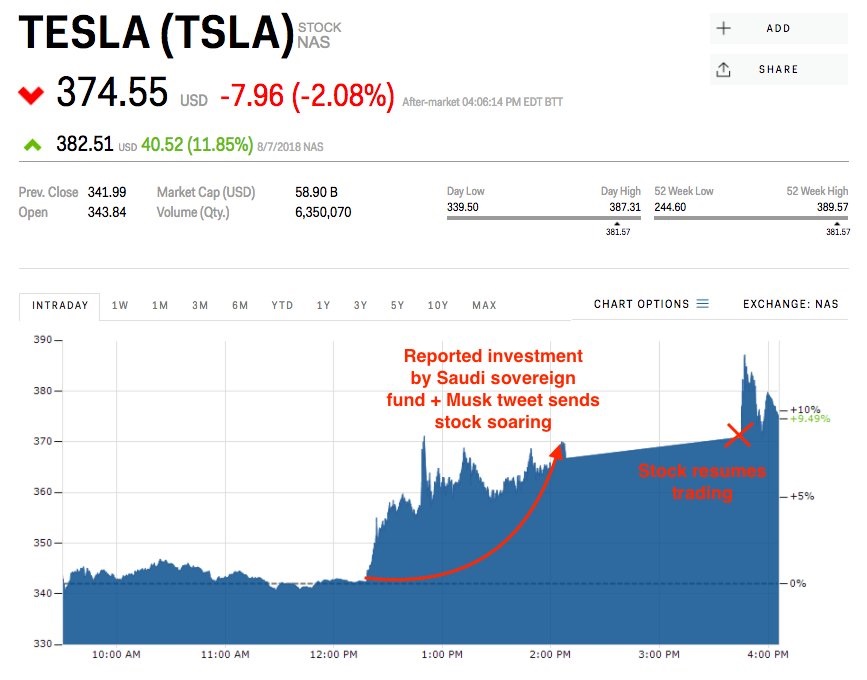 With Musk's tweet, Tesla was plunged into unprecedented market territory. Never before has the CEO of a company so massive and widely followed disclosed something so sensitive on a social-media platform like Twitter.

"Typically you'd halt the stock to make an announcement like this," Greg Sichenzia, a lawyer who advises companies on securities law, told Business Insider by phone. "I know he gets legal advice, but it’s unclear whether he sought it before tweeting."

And as speculative investor fervour raged, so did cries of market manipulation. Armchair Twitter pundits in particular frothed at the mouth. How could Musk flout convention so flagrantly?

What it comes down to is whether what Musk tweeted was completely factual — and that means every part of it. If either the highly specific $420-per-share price or the full funding is found to have been untrue, Musk could be legally liable, Sichenzia said

"When you announce the price, it certainly smells like market manipulation," he added. "If any part of it isn't true, he could certainly be facing legal liability. It’s surprising that the CEO of a company would announce news like that."

Harvey Pitt, who formerly served as chairperson of the Securities and Exchange Commission (SEC), made similar comments during an interview on CNBC. In his mind, whether Musk did something illegal comes down to the CEO's motive in the manner.

"If his comments were issued for the purpose of moving the price of the stock, that could be manipulation, and it could also be securities fraud," Pitt said. "The use of a specific price for a potential going-private transaction is highly unprecedented, and therefore raises significant questions about what his intent was. So that would have to be investigated."

Sichenzia says there could very well be an SEC investigation into the veracity of Musk's market-moving tweet. He says Musk should be particularly worried about a violation of Rule 10b-5 under the Securities Exchange Act of 1934, which deals with the release of misleading statements.

Perhaps the most damning part of Musk's tweet, as it pertains to Rule 10b-5, is once again its specificity, Sichenzia said. Even if it comes out that Musk had a fully funded deal in place at $400 per share, rather than $420, that could still be construed as materially misleading information.

Musk could also be facing a bevy of private legal challenges, Sichenzia said. He said it is an entirely realistic scenario if Tesla's stock drops suddenly in the upcoming days.

"If people are buying, buying, buying on the hype, and the stock crashes back to earth, perhaps below where it was, that could be problematic for him," said Sichenzia. "If the stock is down big, there could be private claims — some sort of class action."

Musk sent an email to all Tesla employees following his tweet, which the company then posted on its blog, outlining a possible go-private scenario and his reasons for considering it. He said "a final decision has not yet been made" on going private, but that "the reason for doing this is all about creating the environment for Tesla to operate best".

"As a public company, we are subject to wild swings in our stock price that can be a major distraction for everyone working at Tesla, all of whom are shareholders," he added.

Immediately after Musk's initial tweet about taking Tesla private, cynics on Twitter wondered aloud: Is this just the CEO's latest strike in his months-long battle against short sellers?

If so, the ensuing stock surge was a victory of sorts for Musk. The 8% increase likely cost short sellers hundreds of millions, squeezing their positions like a vice. After all, Tesla is the most shorted company in the US market by a margin of billions — and such large, extended positions have huge downside.

Musk even addressed short-sellers in his memo to staff, saying:

"As the most shorted stock in the history of the stock market, being public means that there are large numbers of people who have the incentive to attack the company."

In the event that Tesla does get taken private at the $420-per-share price floated by Musk, Tesla bears will incur a $4.4 billion loss on the positions they've built throughout 2018, according to financial technology and analytics firm S3 Partners.

To fully understand what a victory this is for Musk, one must be familiar with his ongoing crusade — which he usually wages on Twitter.

"If you're short, I suggest tiptoeing quietly to the exit … " he taunted in May, following Tesla's previous earnings report.

In a Rolling Stone profile last year, he called them "jerks who want us to die", while also describing their behaviour as "hurtful". He also fired off a tweet in June 2017 in which he said short sellers "want us to die so bad they can taste it ".

Then, in early April this year, after a period of considerable stock strength, Musk escalated his taunts, tweeting, "Stormy weather in Shortville."

In the end, whether Musk's tweet was a ploy to crush short sellers, an attempt to manipulate Tesla's stock, or a completely legitimate — albeit unconventional — corporate announcement, one thing is certain: The CEO never fails to entertain.