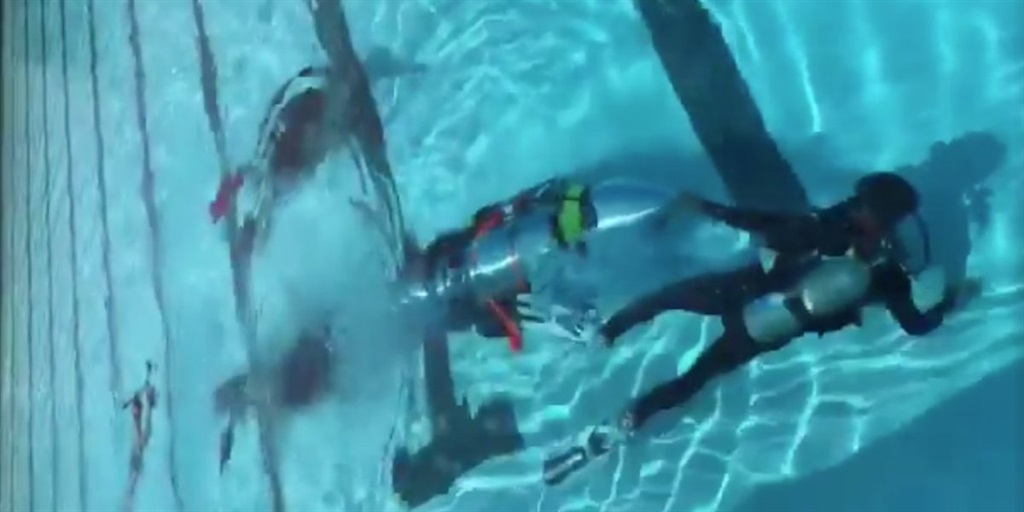 Elon Musk posted a video of people testing a mini-submarine in a swimming pool to aid the rescue of a youth soccer team in Thailand.
Elon Musk/Twitter

Elon Musk is testing equipment designed to help rescue the remaining members of a Thai youth soccer team who are trapped in a cave, the Tesla CEO tweeted on Sunday.

Hours after four boys were confirmed to have been rescued from the cave, Musk tweeted a video of a small submarine-like vessel being tested in a swimming pool.

Earlier this week, Musk offered engineers from two of his other companies — SpaceX and The Boring Company — to assist the Thai government. The video shows three people in scuba gear pushing and pulling the tube across a pool.

Got more great feedback from Thailand. Primary path is basically a tiny, kid-size submarine using the liquid oxygen transfer tube of Falcon rocket as hull. Light enough to be carried by 2 divers, small enough to get through narrow gaps. Extremely robust.

Another video shows the submarine underwater for 35 seconds.

Sam Teller, the spokesperson for the Boring Company, said four company engineers were "offering support in any way the government deems useful."

Here's another look of the vessel:

Pretty close. There is a nosecone on the front to protect against rocks impacting fwd air hoses with a hole on the side for hoses to exit.

Musk first tweeted about the boys trapped in the cave on 4 July after somebody asked him if he would assist. He wrote that he would be "happy to help if there was a way to do so."

I suspect that the Thai govt has this under control, but I’m happy to help if there is a way to do so

Musk then started brainstorming ideas to help via tweet. On Friday, he tweeted that "SpaceX & Boring Co engineers heading to Thailand tomorrow to see if we can be helpful to govt."

SpaceX & Boring Co engineers headed to Thailand tomorrow to see if we can be helpful to govt. There are probably many complexities that are hard to appreciate without being there in person.

In one tweet, he suggested that a tube or series of tubes be sent through the cave network and inflated, creating a tunnel for the team to travel through without needing to scuba dive.

On Saturday, Musk tweeted that he was interested in designing "a tiny, kid-sized submarine" that would be "light enough to be carried by 2 divers, small enough to get through narrow gaps."

In later tweets, Musk said that the submarine he is working on has four handles in the front and four in the rear, along with four air tank connections. He also confirmed that the device could manoeuvre through the most narrow passages.