A composite image of a sculpture of Black Lives Matter protester Jen Reid, revealed Wednesday, and the fallen statue of Edward Colston.

A statue of a slave trader that was toppled during anti-racism protests in England last month has been replaced by a sculpture of a Black Lives Matter protester.

On June 7, a group of demonstrators in Bristol used ropes to pull down the bronze figure of 17th-century merchant and slave trader Edward Colston, and rolled it into the waters of Bristol Harbour.

Thousands of people in the city had turned out that day to march against racism, prompted by the killing of George Floyd by a police officer Minneapolis in late May.

On Wednesday morning, a sculpture of one of the protesters, Jen Reid, was placed on the empty plinth by the artist Marc Quinn. 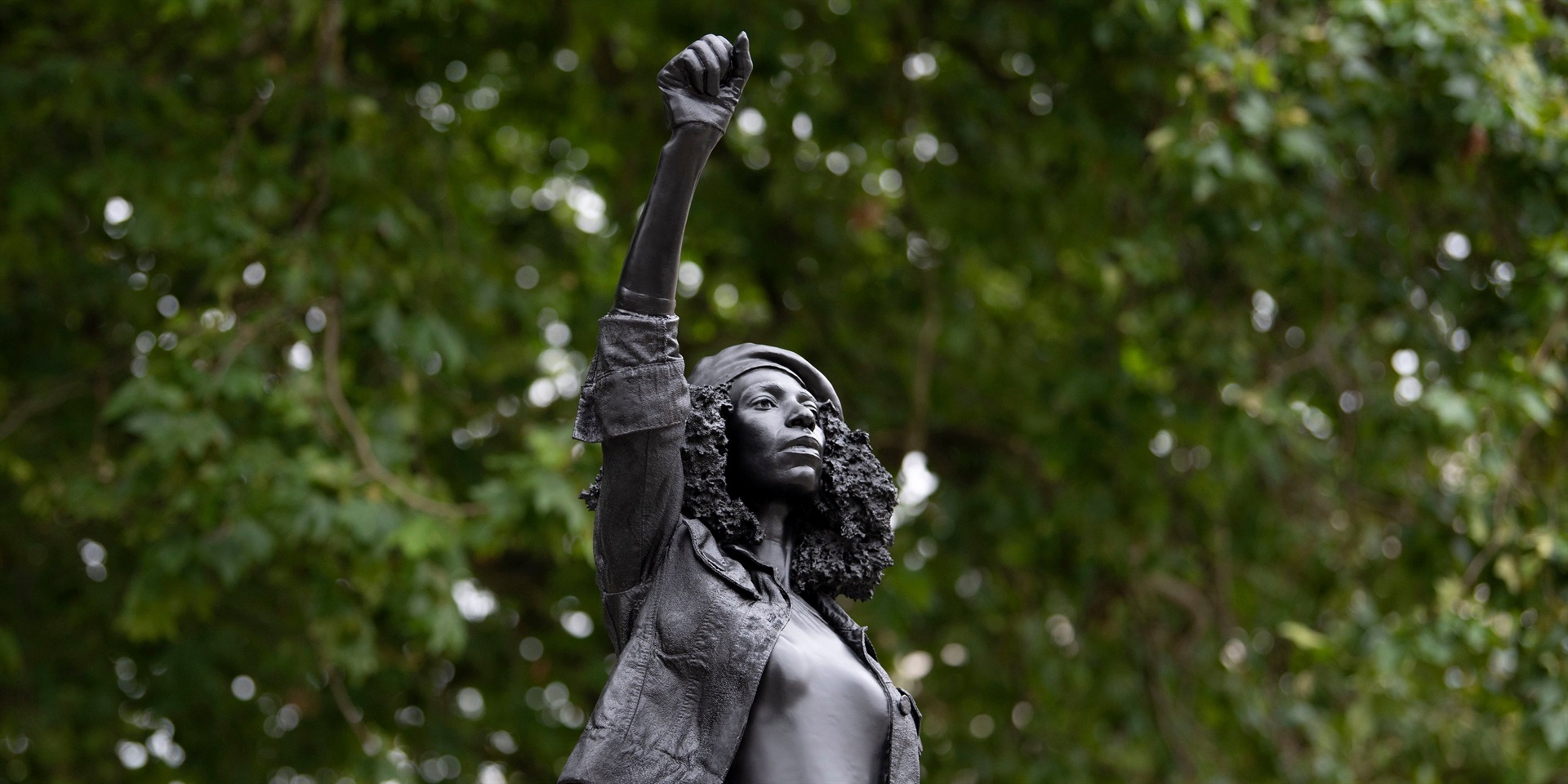 The new installation is titled "A Surge of Power (Jen Reid)" and is based on an image of Reid standing alone on the empty plinth, raising her fist in the Black power salute in the aftermath of Colston's statue falling.

"On my way home from the protests on 7 June, I felt an overwhelming impulse to climb onto the plinth, just completely driven to do it by the events which had taken place right before," she said, according to Quinn's website.

"When I was stood there on the plinth, and raised my arm in a Black Power salute, it was totally spontaneous, I didn't even think about it. It was like an electrical charge of power was running through me."

Here's the photo that inspired the statue:

The sculpture of Reid has not received official approval.

Quinn and a team of ten workers turned up just before 5 a.m. on Wednesday and used a crane to lift the statue on to the plinth.

They left the scene in 15 minutes so officials had no chance to spot them, Quinn told The Guardian.

"I've always felt it's part of my job to bring the world into art and art into the world," Quinn said.

"Jen created the sculpture when she stood on the plinth and raised her arm in the air. Now we're crystallising it." Jen Reid poses for a photograph in front of the sculpture of herself on July 15, 2020.
Matthew Horwood/Getty Images)

Colston was a rich merchant and philanthropist who at one point served as deputy governor of the Royal African Company.

The company oversaw and profited from the capture and transport of slaves from Africa to the West Indies and the UK.

"There is no doubt that Edward Colston profited from the slave trading conducted by the Royal African Company," said the Society of Merchant Venturers, an organisation that manages some of the institutions bearing Colston's name and had counted Colston as a member in the 17th century. Bristol City Council pulled out the statue of Colston from the harbour on June 11.

It is now being restored, and discussions are underway to install it in the Bristol Museum.

Related Links
Trump's campaign claims he will protect Brazil's Christ the Redeemer statue from vandalism
Google apologised after Winston Churchill's photo disappeared from searches for World War II leaders
Churchill's granddaughter says his statue should be in a museum after protesters scrawled...
Next on Business Insider
Ukraine's drones are becoming increasingly ineffective as Russia ramps up its electronic warfare and air defences