I ate only 'flat stomach' foods for a week — and I felt tired and sluggish. These foods claim to give you a "flat stomach."
structuresxx/Shutterstock
As someone who would happily spend her days gorging on pizza, pasta, and any other carb you can think of, I was a little apprehensive when I learned that I would be eating only so-called "flat stomach" foods for a week.

While the category of "flat stomach" foods can be a little vague, I took it to mean foods that any claim will work to target extra fat and bloating around your midsection. I also consulted some lists of these so-called "flat belly foods." For seven days, I decided to do the daunting task of ridding my diet of all foods that won't help me achieve this. I cut out all bread and pasta, foods with high sodium content, artificial sweeteners, processed foods and snacks, sodas, dairy, and fatty meats.

So, did eating only flat stomach foods during the course of a week help me lean out my midsection? Here's what I found out when I attempted seven days of eating only belly fat-fighting foods.

Day 1: I started off my first day with a coffee, two hard-boiled eggs, and a banana. I was surprised that I didn't feel as hungry as usual by the time lunch came around

My confidence about making it through the week without touching a breakfast burrito soared, and I felt like I definitely had this.

It was nice outside, and I ended up going out to lunch with two of my friends for my friend's birthday. I was going to get a tuna and avocado bowl, which has brown rice, quinoa, avocado, cucumbers, and comes with an umami sauce and pineapple salsa, but the restaurant was out.

While I never order salads, it was a little easier to make that choice when both of my friends joined me in ordering the same thing.

I ended up getting a salad with poached shrimp, shredded crab meat, tomatoes, avocado, egg, a mix of olives and capers, and cilantro. I got the cilantro lime dressing on the side and tried to use as little as possible. The salad was actually pretty refreshing and it seemed filling in the moment, but I didn't realize how hungry I was until dinnertime.

For my last meal, I made myself a big plate of rotisserie chicken, one-fourth of an avocado, half of a baked sweet potato, three spoonfuls of black beans (I made sure to get the no salt added type, because that can really add up), and a few sprinkles of lime juice for flavour. I ate a lot of beans.
Lara Walsh

Day 2: I started my morning off making oatmeal with blueberries and bananas (which are all foods that fight bloat), drizzling a little bit of honey on it for some sweetness

I was surprised that it actually made me feel a lot fuller than the eggs did the day before, so I decided I was going to start having that more regularly.

For lunch, I decided to try a flat stomach-approved spin on a sandwich by trying out a brown rice tortilla from Trader Joe's. It only has six ingredients and is gluten and wheat-free, and I immediately noticed that the texture is quite a bit harder than the traditional flour tortilla that I'm used to. However, when I warmed it up with roasted chicken, black beans, avocado, and lime juice, it was actually pretty good and I didn't find myself missing the wheat (or the lack of cheese). The wrap was wheat-free.
Lara Walsh

I felt quite a bit fuller than the night before, so I tried a simple recipe that I saw on Bon Appetit's website. Basically, you roast broccoli and canned cannelloni beans (salt-free, of course) with a mixture of garlic, olive oil, and red pepper flakes. It actually ended up being really good, and I felt really full and satisfied after dinner, probably due to the combination of cruciferous vegetables and beans.

Day 3: For breakfast, I had hard-boiled eggs with avocado, and instantly found myself missing the fullness I got from the oatmeal the day before

Even though eggs and avocado are full of Omega 3s and healthy fats, I just didn't feel like they were as filling as I wanted. I decided to have a banana as a snack with a tablespoon of almond butter, and that helped hold me over until lunchtime.

For lunch, I ate one of the chicken wraps with black beans and avocado that I meal-prepped from yesterday. I warmed it up, but it was soggy and definitely not as good as the day before.

The biggest challenge comes at dinner, when my group of friends decided to go to one of my favourite pizza restaurants. Unlike with many other restaurants, I struggled to find something that fits with my restrictions. All of the salads came with heavy dressings, processed meats like bacon or salami, croutons, and at least a few different types of cheese. Instead of the pepperoni pizza with truffle oil that I normally get from this place, I settled on grilled calamari with peppers and tomatoes and scarfed it down in a few minutes. It took all my self-control not to have a bite of the pizza that my friends offered. I had grilled calamari.
Lara Walsh

Day 4: It was hard saying no to brunch with my friends, but I knew it was going to be almost impossible to find something that fit with my diet I was starting to realize that it was a lot easier to stick with my diet when I didn't see everyone else eating what I'd normally get, and I was not trying to torture myself watching my friends dig into an egg Benedict or pancakes. Instead, I stayed at home and make my new favourite breakfast of oatmeal with blueberries, which I supplemented with a tablespoon of almond butter. Surprisingly, I really like the texture and savoury and sweet combination.

Since it was a holiday weekend, I went out with my friend's family for a late lunch. It's a French restaurant, and I resisted the tempting warm pieces of baguette and slices of cheese in favour of grilled salmon served with trumpet mushrooms and homemade potato chips (which I leave behind). It was actually delicious and filling, and I didn't feel as sad as I'd expect not getting to dig into dessert. This was delicious.
Lara Walsh

For dinner, my friends and I took advantage of the warm weather by grilling chicken kabobs with peppers. For the side, we made a salad, and although I didn't eat the feta cheese, I didn't feel restricted. Plus, the ingredients - tomatoes, cucumbers, avocados, and lettuce with a balsamic vinegar and olive oil dressing - were all flat stomach-approved. I didn't feel restricted with these.
Lara Walsh

Day 5: I woke up craving carbs and dreaming of pasta, bacon, cheese ... basically everything I couldn't eat

My confidence from earlier in the week about breezing through the seven days of flat belly foods was gone. It was a struggle to eat my oatmeal with blueberries and not choose something that's more satisfying.

It's a holiday, so I found myself wanting to snack to distract myself while I was at home. I let myself have two bananas with almond butter while I looked through Instagram at pictures of food that I couldn't have. Yes, I'm a masochist.

Lunch was the baked broccoli and cannelloni beans casserole with chicken, which definitely wasn't as satisfying the second time around. At least was comfortably filling and held me over until dinner. By now I was craving carbs.
Lara Walsh

For my last meal of the day, I pulled out a sheet pan for salmon, which I went a little overboard dressing with fresh dill to give it some flavour. I added sliced lemon on top, then put some asparagus, garlic, and olive oil on the pan too. I served it with kimchi, which is known for being good for your digestion. I liked the tangy sourness and the crunchy texture paired with the rest of my meal.

Day 6: I was already dreaming about what I could eat when I got off this diet

I was officially tired of oatmeal and hard-boiled eggs, so I scrambled two eggs and add 1/4 of an avocado with some sesame seeds. It's no avocado toast, but it was actually pretty good and I didn't find myself craving a snack until lunchtime.

For lunch, I had leftovers of the salmon with asparagus and kimchi, and I found myself leaping at the opportunity when my friends asked me if I wanted to go out to dinner at this Italian restaurant I love.

Unfortunately, I couldn't get the squid ink pasta with creamy tomato sauce that I normally get, but the Branzino fish with fava beans and pickled tomatoes and onions was actually amazing and didn't make me feel as heavy as the pasta normally would. 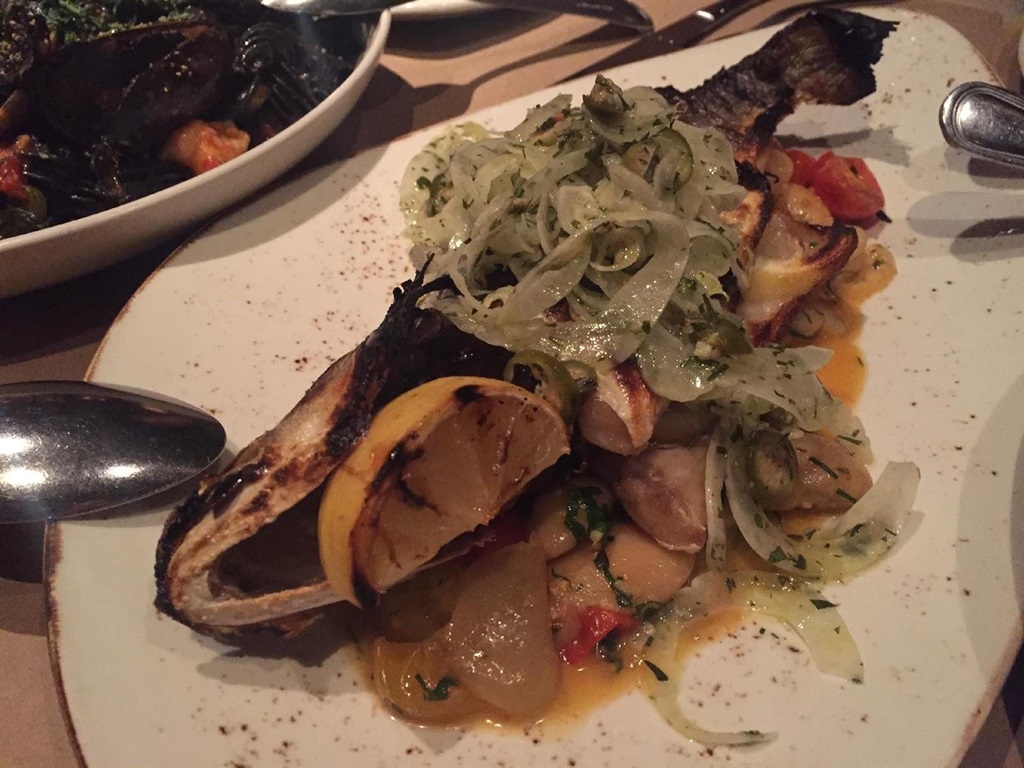 This was delicious too.
Lara Walsh

Day 7: I've made it to the finish line, and I decide to finish my last day off strong with lots of flat belly foods

I paired some plain Greek yoghurt with blueberries and honey for breakfast, which surprisingly kept me full longer than I'd anticipated. It was a tough switch having plain Greek yoghurt instead of the vanilla flavour that I'd normally get, but the honey definitely helped.

For lunch, I tried to be virtuous by attempting a recipe for a cucumber, tomato, avocado, and quinoa salad that I'd seen online. Sadly, it was not that good and nowhere as filling as I'd expected, so I ended up making multiple bowls.

By the time dinner came around, I was feeling pretty hungry and downright cranky about my food situation. I headed to a Japanese restaurant with friends and was pleased to find that the majority of the menu seemed to work pretty with my diet.

For starters, I had some edamame and finished off with a Chirashi Bowl (basically a bunch of sashimi pieces on a bed of rice). I resist getting a glass of Sapporo with my dinner but end the night feeling stuffed and happy. 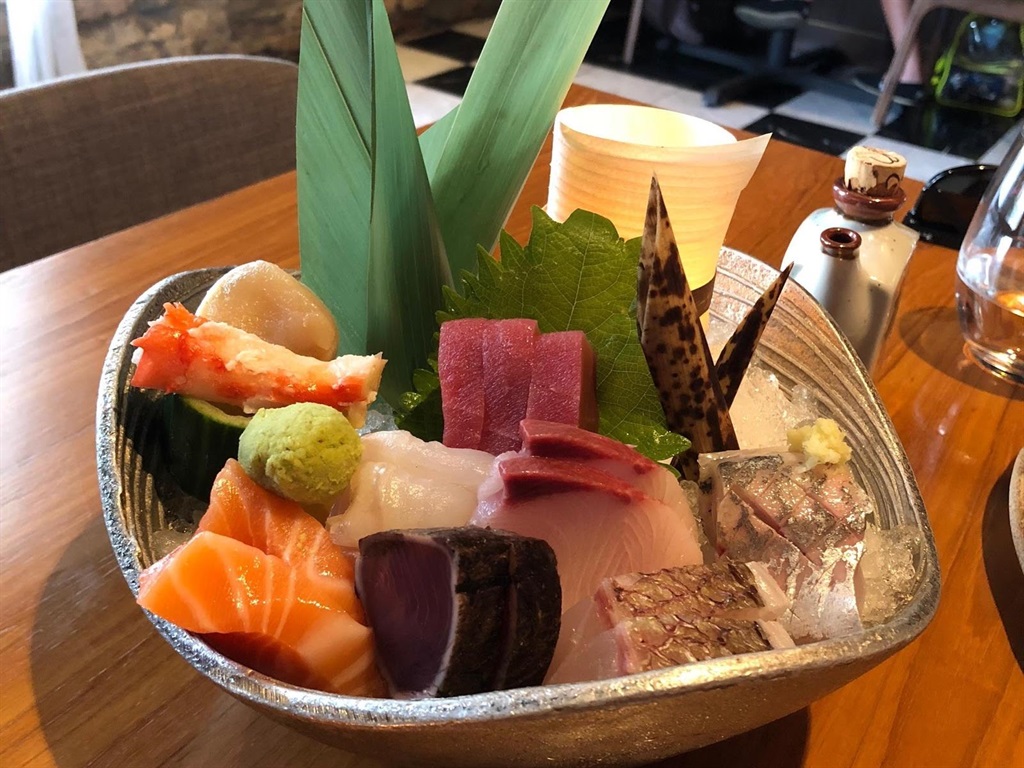 I was able to order a ton off of the menu.
Lara Walsh

Reflecting upon the week, I realized that maybe a diet solely of "flat stomach" foods isn't all it's cracked up to be

While there were definitely days that my stomach looked a little more defined and trimmer than usual, I noticed that I did feel bloated as often as not. Many carbohydrate-rich foods - which have been villainized by cultural stigmas and the rise in popularity of low-carb diets like the Atkins and Keto - are actually a good source of fibre, and I found it hard to swap them out for something that was flat stomach-approved.

Even though I found myself eating a lot more vegetables and even ordering salad, I also felt more tired and sluggish without my normal intake of carbs (or fatty meats) to get me through the day

Out of all the non-plant-based sources of protein, I noticed that the fatty fish were the most satisfying - but I still found myself feeling pretty hungry most of the time. Of course, everyone's body is different and I might have started seeing real results after another week or two of following this diet, but I don't think I would have the self-control to make it that long.

My takeaway from this whole experiment? Everything in moderation.