Earth's core is growing lopsidedly, new study suggests - and has been for at least half a billion years An illustration of Earth's core.
Getty

Think of the Earth like a geological tootsie pop.

If you were to peer more than 4,828 kilometres below your feet into the planet's centre, you'd see a dense, solid ball of iron roughly three-quarters the size of the moon. That iron spheroid is the inner core, and it's nestled inside the planet's molten outer core.

The inner core is always growing: Its radius increases by a millimeter each year as pieces of molten iron in the outer core cool and solidify into iron crystals. Although temperatures in the inner core are high enough to liquify iron, the intense pressure that deep inside the planet prevents the crystals from melting - picture it like packing a hard snowball.

But according to a recent study published in the journal Nature Geoscience, the inner core is growing lopsidedly. One half of the sphere, the eastern half under Indonesia's Banda Sea, accrues 60% more iron crystals than its western counterpart, which is located under Brazil.

"The west side looks different from the east side all the way to the centre" Daniel Frost, a seismologist at the University of California, Berkeley, who co-authored the new study, said in a release. "The only way we can explain that is by one side growing faster than the other."

Asymmetric growth in the core A graphic showing how iron crystals are distributed and move around in Earth's inner core.
Marine Lasbleis

Although the Earth is more than 4 billion years old, its inner core is younger - geologists suspect it formed between half a billion and 1.5 billion years ago, when pieces of liquid iron from the outer core first started to crystallise.

Frost's team created a computer model that tracked the inner core's growth over the last billion years. They found that its lopsided nature likely began as soon the core formed.

Of course, if one half has been growing faster than the other for that long, the inner core's shape should no longer be spherical. But that's not the case. So Frost and his colleagues think that gravity may be compensating for the asymmetrical growth by pushing excess crystals from the core's eastern side to its western side, thereby helping the core maintain a ball-like physique. 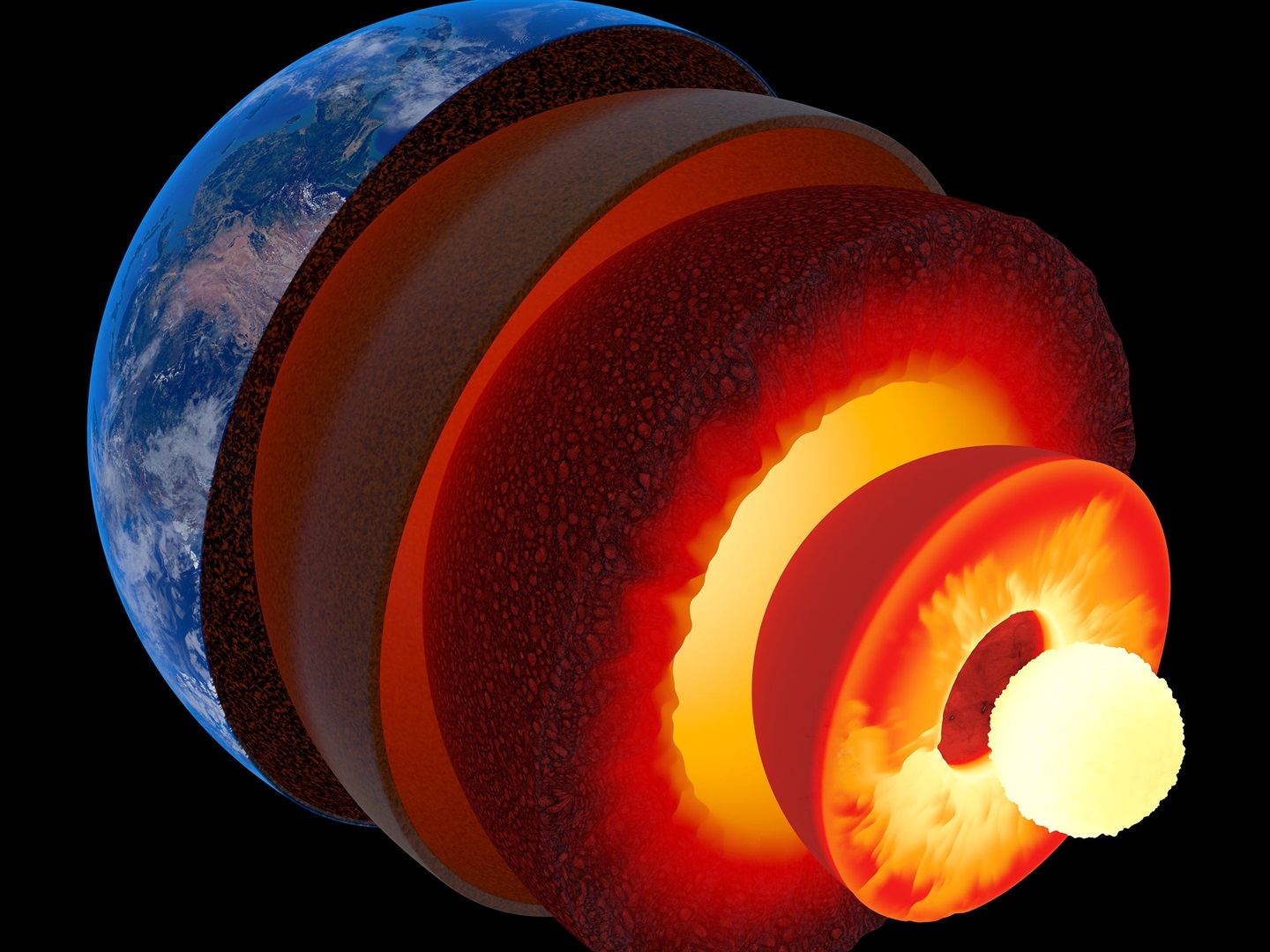 An artist's concept of Earth's layers, including the crust, mantle, and inner and outer cores.
Getty

Frost's team isn't sure why iron crystals are forming unevenly in the inner core, but he said the answer likely lies in the layers above it - both the outer core and the mantle, a 2,896-kilometre-thick band of hot rock on which the tectonic plates float.

"Every layer in the Earth is controlled by what's above it, and influences what's below it," Frost told Live Science.

The genesis of that cooling chain, Frost said, could be Earth's tectonic plates. When one plate pushes up against another, one subducts, or sinks, below the other. The subducting plate cools the mantle in that area of the planet. An illustration of Earth's magnetic field, in blue, as it protects the planet from solar radiation.
NASA

Earth's core plays a key role in protecting the planet from dangerous solar wind and radiation. Swirling iron in the outer core generates a magnetic field that stretches all the way from there to the space surrounding our planet.

That swirl happens, in part, because of a process in which hotter, lighter material from the outer core rises into the mantle above. There, it swaps places with cooler, denser mantle material, which sinks into the core below. This is known as convection.

Convection also happens between the inner and outer core, so if various parts of the outer and inner core are cooling at different rates, that could affect how much heat gets exchanged at the boundary - which might have an impact on the swirling engine powering Earth's protective sheath.

"The question is, does this change the strength of the magnetic field?" Frost told Live Science.

For now, his group isn't sure, but Frost said he's investigating the answer.