A Durban-based light manufacturer that's focused almost exclusively on the commercial and industrial market is tapping into South Africa's growing cannabis sector with a range of specialised equipment.

South Africa's looking to transform its fledgling cannabis sector into an industrial and commercial powerhouse worth R28 billion and the potential to support 25,000 jobs. That's according to the department of agriculture, land reform, and rural development, tasked with creating a Cannabis Master Plan that, when fully realised, will see South Africa as a key producer and exporter.

And as cannabis cultivation creeps into the mainstream, largely thanks to its decrimalisation for private, personal use in 2018, companies are tapping into the potential of a commercial boom.

Energywise, specialists in the design and manufacture of LED fittings, is one such local company that's moving into the cannabis space. The Durban-based manufacturers have been making energy-efficient LED light fittings since 2015 and have a history in the commercial and industrial market for other lights stretching back even further.

The company's lights, sold through leading electrical distributors, have been installed in major retailers, such as Pick n Pay and Spar, and in big factories, like the Bell Equipment manufacturing plant and Sappi.

Energywise's foray into the world of horticultural lighting started in 2018 and, at the time, had nothing to do with cannabis growers.

"We had a crowd come around here about four years ago looking for lights to grow strawberries in a container. We hadn't actually explored horticulture until then," Anthon Human, Energywise's head of horticulture and research and development, tells Business Insider South Africa.

The strawberry project didn't progress, but Energywise's involvement in creating bespoke light fittings sparked greater interest in the unexplored horticulture market. The company connected with its main German supplier a year later and, as luck would have it, newly developed horticultural lighting components matched perfectly with industrial fittings previously developed by Energywise.

"The other thing that was very lucky for us was that in our laboratory, where we've got a R1 million photo goniometer, which we'd been using for industrial, commercial, and retail, that machine can measure in lux and lumen and was able to measure in horticulture metrics, which not many other people in the country can do," explains Human.

This allowed Energywise to enter South Africa's horticultural market, with highly specialised lights and fittings, shortly after returning from Germany. 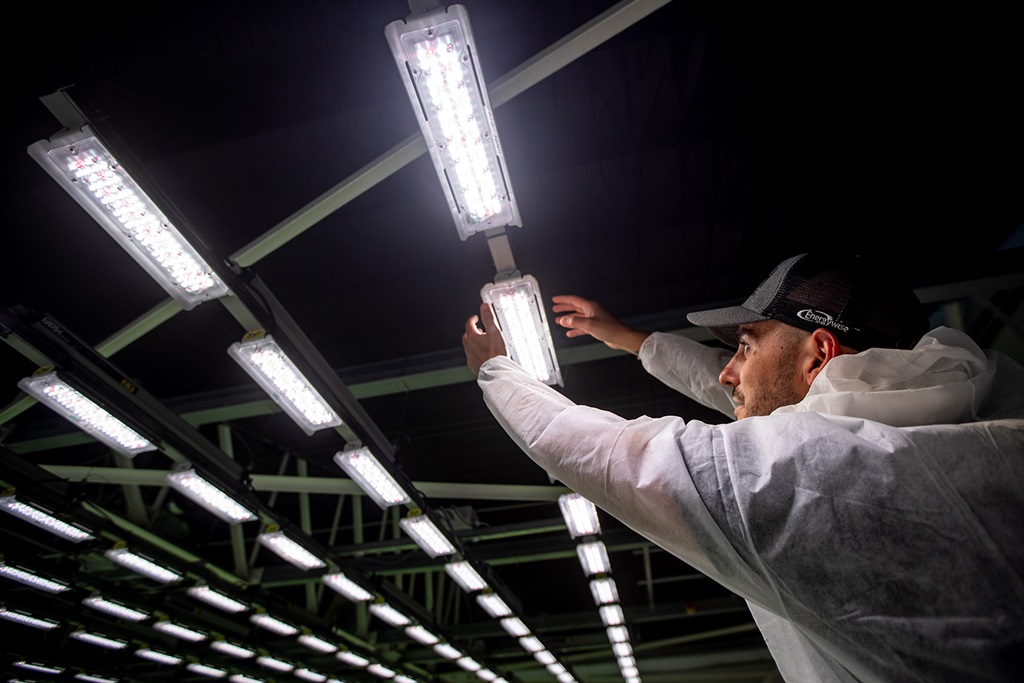 Unlike most other lights sold in South Africa for the express purpose of growing cannabis, Energywise's new EARTH products are, apart from using high-quality LED components developed in Europe, designed and manufactured entirely in South Africa.

"Our approach is heavily R&D driven, and it's allowed us to get a competitive edge in a market where, for the most part, companies are importing from the East, slapping their sticker on, and selling as a South African product," says Jonas Barausse, Energywise's chief operations officer.

"[We are working] to make, as much as we can, from beginning to end of that cannabis ecosystem, a South African offering that can stand on a global stage."

The EARTH range, in addition to using cooler, energy-efficient LED lights that maintain their output for far longer than, say, high-pressure sodium-vapour (HPS) lamps, are finely tuned to optimise each stage of the cannabis growth cycle.

The lights do this through distinct spectrums, each applicable to optimise different cultivars and growth stages. Similarly, the intensity of these lights can be adjusted as necessary, while precision lenses reduce heat transfer and create even lighting with minimal spillover.

In terms of the cost of kitting a grow with Energywise lights, that all depends on the size of the operation and how many plants need to be fed.

"I can say that an EARTH range fitting can vary from R2,260 for a small propagation light to R10,159 for a full spec flowering/veg luminaire, and generally, except for a real micro grower, you'll need more than one fitting."

The new range of products, which have recently been installed at a state of the art hydroponic, medical-grade facility in the Western Cape, now accounts for 10% of Energywise's business. But it's in the research and development department where these horticultural lights are getting the most attention.

"We're probably sitting in the 90% range of what we do is commercial and industrial, but far closer to 60%, maybe even 75% of our R&D effort is focused exclusively on grow lights. So, we're seeing this as the future," says Barausse.