Read: Here's what Comrades record-breaker Gerda Steyn eats for breakfast - and why she believes in red meat 'boosts'

1. Here’s a surprise: South Africa’s factories shot the lights out in April – with output jumping 4.6% year-on-year in April, the biggest rise in three years. Economists polled by Reuters expected only a 1.35% increase. Production of cars rose by almost 19% in the first month after the electricity supply stabilised.

2. SAA workers have staged lunchtime pickets at airports around SA – they want Vuyani Jarana back as CEO. Fin24 reports that the South African Cabin Crew Association and the National Union of Metalworkers of South Africa also want action to be taken following a forensic report by EY that reportedly implicated executives and board members in the company’s mismanagement.

4. Meanwhile, the ANC will launch an investigation into Ace Magashule's alleged involvement in the formation of a rival political party, the African Transformation Movement (ATM). News24 reports that ANC secretary general Kgalema Motlanthe will lead the investigation. Magashule is suspected of having played a key role in the formation of ATM, of which Mzwanele Manyi is the most prominent member. It's even believed that he recommended that the word "movement" be included as part of the party’s name.

5. The land reform panel handed in its final report on Tuesday. The panel considered what support government should give new farmers and compensation for current land owners, as well as which forms of ownership or leasehold regimes should be considered. Cabinet will consider the report before it is made public.

Dropbox just overhauled the designed of its flagship file-sharing product.

"It's the biggest change we've ever made to our product," Dropbox CEO and co-founder Drew Houston said at a press event.

Dropbox started as cloud storage for files, but now it views itself as a virtual workspace for companies, the company announced Tuesday.

For instance, employees tend to use an array of tools like Slack, Zoom, Atlassian, Google's G Suite, and more. This involves having to switch between windows and tabs to find files and communicate with co-workers.

But with the new Dropbox, users can organize their related files in one place, whether it's PowerPoint files or Google Drive files. Plus, Dropbox partnered with Zoom, Slack, and Atlassian for new integrations. So workers can send Slack messages or set up Zoom meetings right from Dropbox and don't have to keep switching between different apps.

"Just about all the core experiences on the desktop have been completely imagined for the better except our work stuff," Houston said. "Why are we still stuck in this little time capsule? What if our tools are organized? What if the conversations and context around it can live together? Maybe we can take an even bigger step back." Here's what Dropbox looks like when a user sends a photo called "Promo_Image02.jpg to Slack. 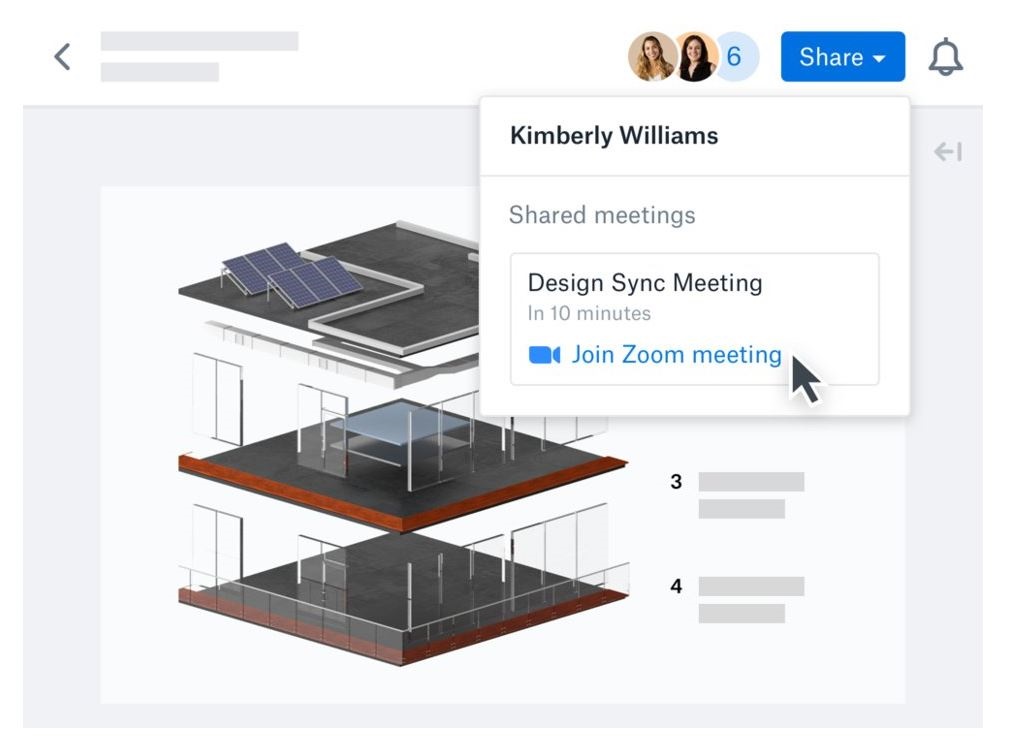 Dropbox now also includes a unified search so that users can search between their files and conversations in one place, as well as web shortcuts for users to add relevant links.

Dropbox will still be able to sync and store files, as it has done since its beginning.

The integrations with Google's G Suite, Slack, and Zoom, as well as the web shortcuts are now generally available. Dropbox decided to integrate with certain tools because they represent the "best of breed ecosystem" and are popular among users, says Adam Nash, vice president of product and growth at Dropbox.

Dropbox also built a new desktop app which is available in an early access program for some customers. It is currently working on integrations with Atlassian.

Nash says that Dropbox heard from customers that they felt somewhat of an "attention deficit" from having to use so many workplace tools. What's more, people may have their own preferences on what tools they prefer to use. Some may prefer Microsoft Office, while others may prefer to use Google's g Suite.

"Right now, teams struggle with that because they have to harmonize around one tool or they have to learn new tools that they're not using," Nash told Business Insider."With the new Dropbox, you can separate the content from the application. If you like PowerPoint, that's fine. Everyone can collaborate around it even if they don't use either application."

Dropbox had previously updated its tools to help people collaborate on their files better, such as allowing people to leave comments on videos and files. So this design was to help people think of Dropbox as their default workplace tool, and not have to switch between as many different apps when they work.

"We couldn't bring all of them to users the way we wanted to as a background service in the operating system," Nash said. "That was the realization that led us down the path of building a desktop application. How do you bring everything together to that kind of experience so people don't have to pogo stick around?"