After the crash of a Sikorsky S-76 helicopter carrying Kobe Bryant on Sunday, the Federal Aviation Administration issued an airspace restriction for 5 nautical miles in every direction from the crash site, effectively closing the airspace above Calabasas, California.

The crash killed Bryant and eight other passengers, including his daughter Gianna "Gigi" Bryant.

The restriction, known as a temporary flight restriction, was placed at 2:15 p.m. PT, according to the FAA's website, shortly after the crash as news, rescue, and law-enforcement helicopters flooded the scene.

While those types of helicopters frequently fly near crash sites, a spokesperson for the FAA told Business Insider that the agency decided to close the airspace, partly because of the "significant number of aircraft, including drones, operating over the accident site."

The restriction extends 5 nautical miles in each direction from the site up to 5,000 feet above sea level.

While it's unclear how many drones were operating in the area, the devices have become commonplace in the skies because they can be used for aerial photography and videography.

Most drones feature cameras with video-recording capabilities, enabling their operators to get closer footage of the crash scene than a normal helicopter could. The drones are lightweight, nimble, and don't produce the downdrafts that helicopters do, making them favourable for filming.

Drones, however, have proven to be unreliable and dangerous for nearby aircraft and bystanders on the ground. The operator does not typically have a 360-degree point of view, which makes preventing crashes with other aircraft difficult. Five collisions were reported in the vicinity of the helicopter crash site, according to data from FlightRadar24.

Though mostly small and compact, drones can have a devastating effect on aircraft. Researchers from the FAA released a report saying that the harder materials found in drones often do the most damage.

In response to the threat, airports and airlines have been coming up with ways to detect and avoid drones, CNN reported. Lawmakers have even recommended mandating the installation of devices on drones to keep them out of sensitive airspace.

In 2018, drone sightings at London's Gatwick Airport shut down operations. Aircraft were not allowed to take off or land at London's second-largest airport for three days during the busy Christmas rush. About 140,000 passengers were affected, and police were unable to effectively mitigate the situation, BBC reported. Police were not able to find the operators, and a similar situation occurred a few months later with similar results, BBC reported.

Drones colliding with news helicopters is also a fear. A drone was sighted "a few feet above" a news helicopter in Washington in 2015, KOMO News reported. The FAA later told the news agency that it received reports of similar incidents around 25 times per month at the time. A drone crashed into Seattle's Space Needle in 2016, PCMag reported. The drone hit just feet from bystanders on the roof of the landmark, rendering the aircraft immovable, video acquired by GeekWire shows.

The White House also had a drone incident when a government employee inadvertently lost control of the aircraft, which then crashed on the South Lawn, The New York Times reported. It was the first time since former President Bill Clinton's administration that an aircraft had crashed in front of the White House. 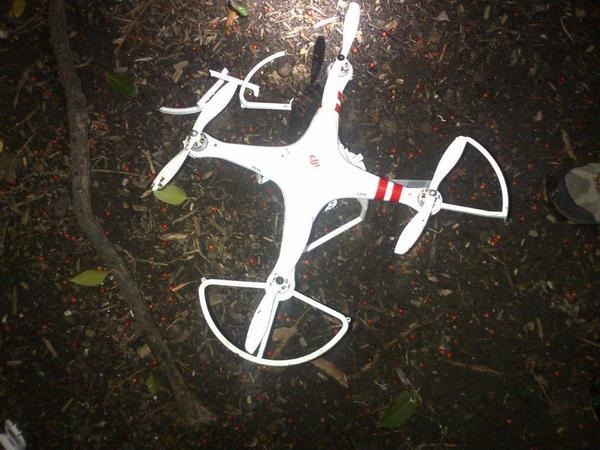 The restrictions on Calabasas' airspace are scheduled to remain in effect until the end of the month, though that could change depending on guidance from the FAA and the Los Angeles County Sheriff's Office.