12 heartwarming dog stories to get you through the week Big Poppa the bulldog looked sad because he wanted to play with his friends, and his owner's photo got thousands of shares.
Rashida Ellis

Dogs can often serve as reminders of all that's good in the world.

For instance, at the onset of the coronavirus pandemic, a team of golden retrievers helped deliver beers to customers, lifting spirits while helping out the brewery owners.

People have also shared inspiring stories of rescuing dogs in need of a loving home, and uplifting moments, such as when a team of pilots who volunteered to transport a group of puppies across the US to help them prepare for training as service dogs.

Keep reading to explore a selection of uplifting dog-related stories that will help you get through the week and beyond with a smile.

A photo of Big Poppa the bulldog looking sad went viral in April. 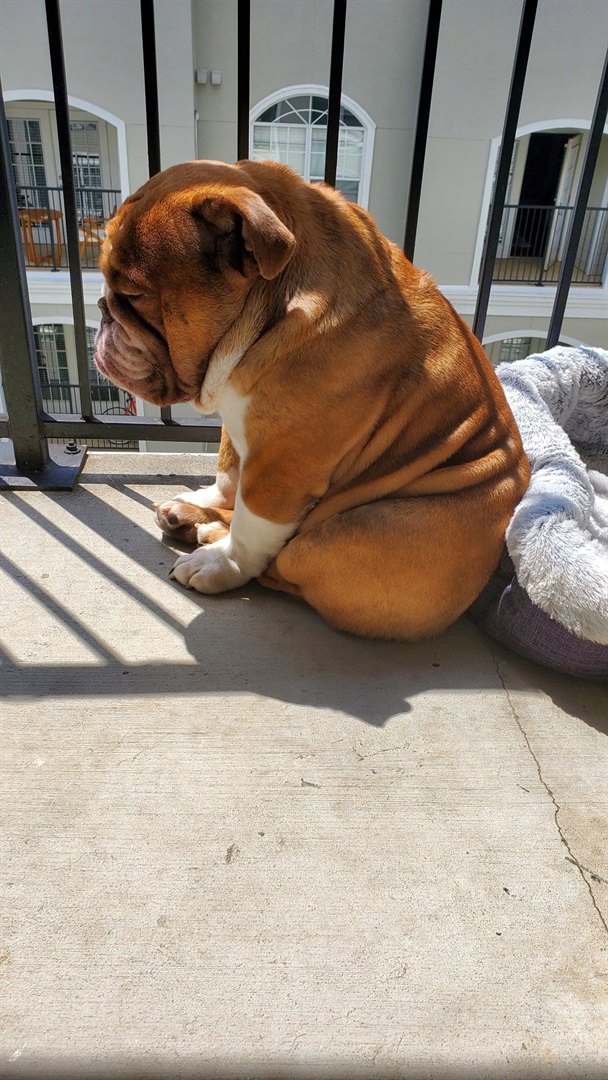 This photo of Pop has been retweeted over 94,000 times.
Rashida Ellis

Owner Rashida Ellis previously told Insider that while she was working from home, she noticed Big Poppa, her 3-year-old English bulldog, was whining on her apartment patio. Ellis decided to take a picture to send to her friends.

"I posted the picture and thought nothing of it," Ellis said. The photo has been retweeted thousands of times since it was first shared in April.

Ellis has also continued to post updates on what Pop is doing in quarantine and said he just wants to play with friends again once the pandemic is over.

"Pop loves children more than anything in the world," she said.

Two golden retrievers, dubbed the "brew dogs," delivered beer to customers under lockdown in New York in May. 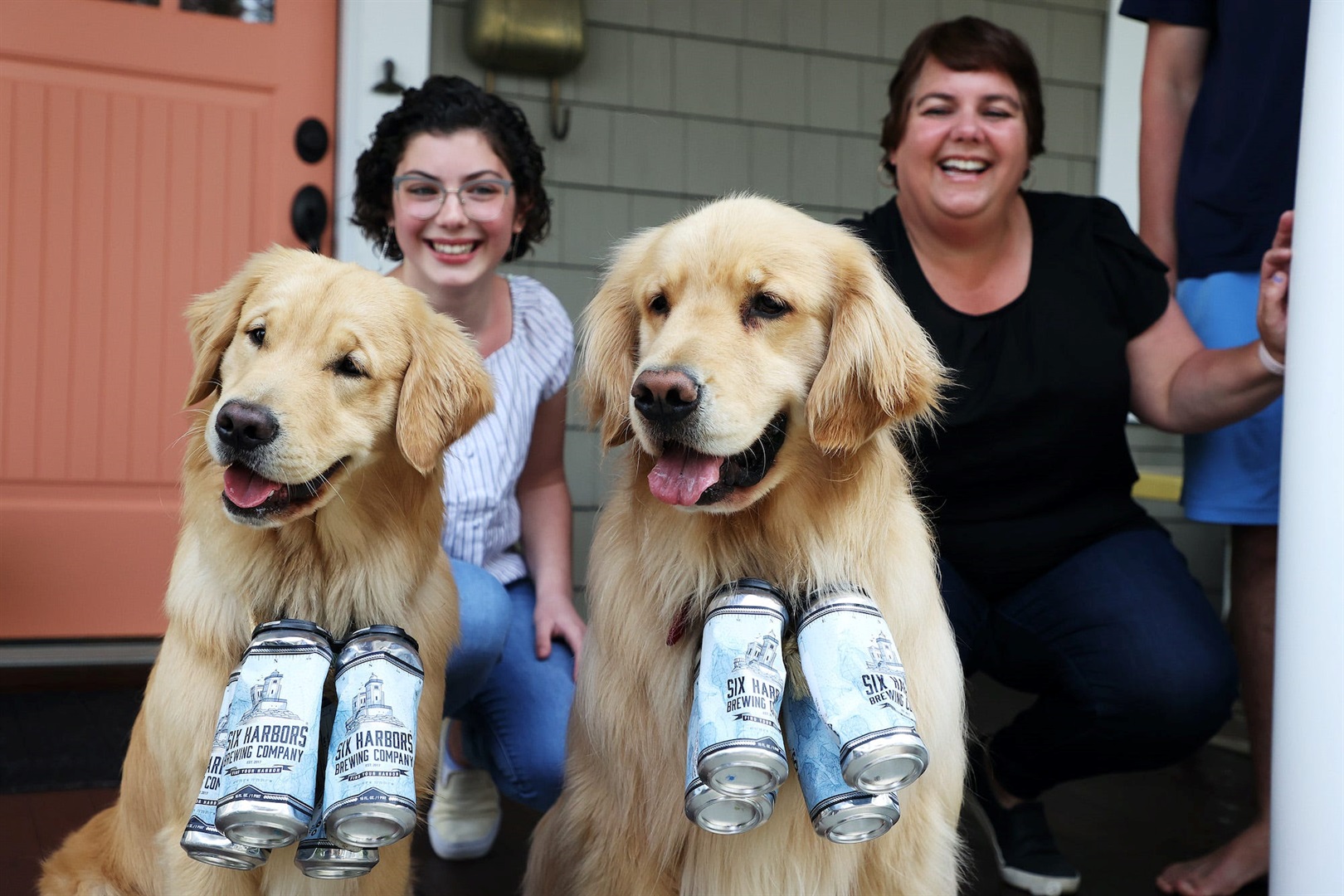 Buddy and Barley made beer deliveries in early May to some New York residents.
Al Bello/Getty Images

Karen and Mark Heuwetter, the owners of Six Harbors Brewing Company in Long Island, took their dogs, Barley and Buddy, on beer runs during the coronavirus pandemic.

"We took the dogs on a few trips and people were loving the dogs when they came ... so we added them," Mark told the New York Daily News. "The dogs make a nice compliment to the delivery service. They put smiles on people's faces."

It's important to note that the dogs were pictured carrying makeshift four-packs around their necks, but the cans are actually empty, and the humans are the ones handing customers the beer.

A bulldog named Bogart loves sticking his head through a hole in the fence, so his owner painted different costumes to make for adorable photos. Bogart is a 3-year-old English bulldog who lives in Denmark.
Ranveig Bjørklid Levinsen

In May, Bogart's owner, Ranveig Bjørklid Levinsen, told Insider she had her daughter paint a crown with a royal robe in one hole and a jester hat in the other so it would look funny when their dog poked his head through the fence.

"I thought it would be fun to have something like at the amusement parks when you poke your head and have your picture taken through the holes," she said. "I get the ideas but I'm not good at painting. My youngest daughter painted the costumes around the holes."

A BBC sports broadcaster held an annual performance review for his two dogs. Andrew Cotter shared a video on Twitter of the annual performance review he had for his two dogs, Mabel and Olive.

In the clip, Cotter told his dogs they had ruined the sofas and still hadn't managed to catch a single squirrel. He also read a message from management for each of them.

"This is one of the things that we have to address, the lack of focus at times," Cotter told Mabel after she had technical difficulties logging on to the call.

An 8-year-old disabled chihuahua named Stanley found a new home after he was abandoned next to a New Jersey highway. 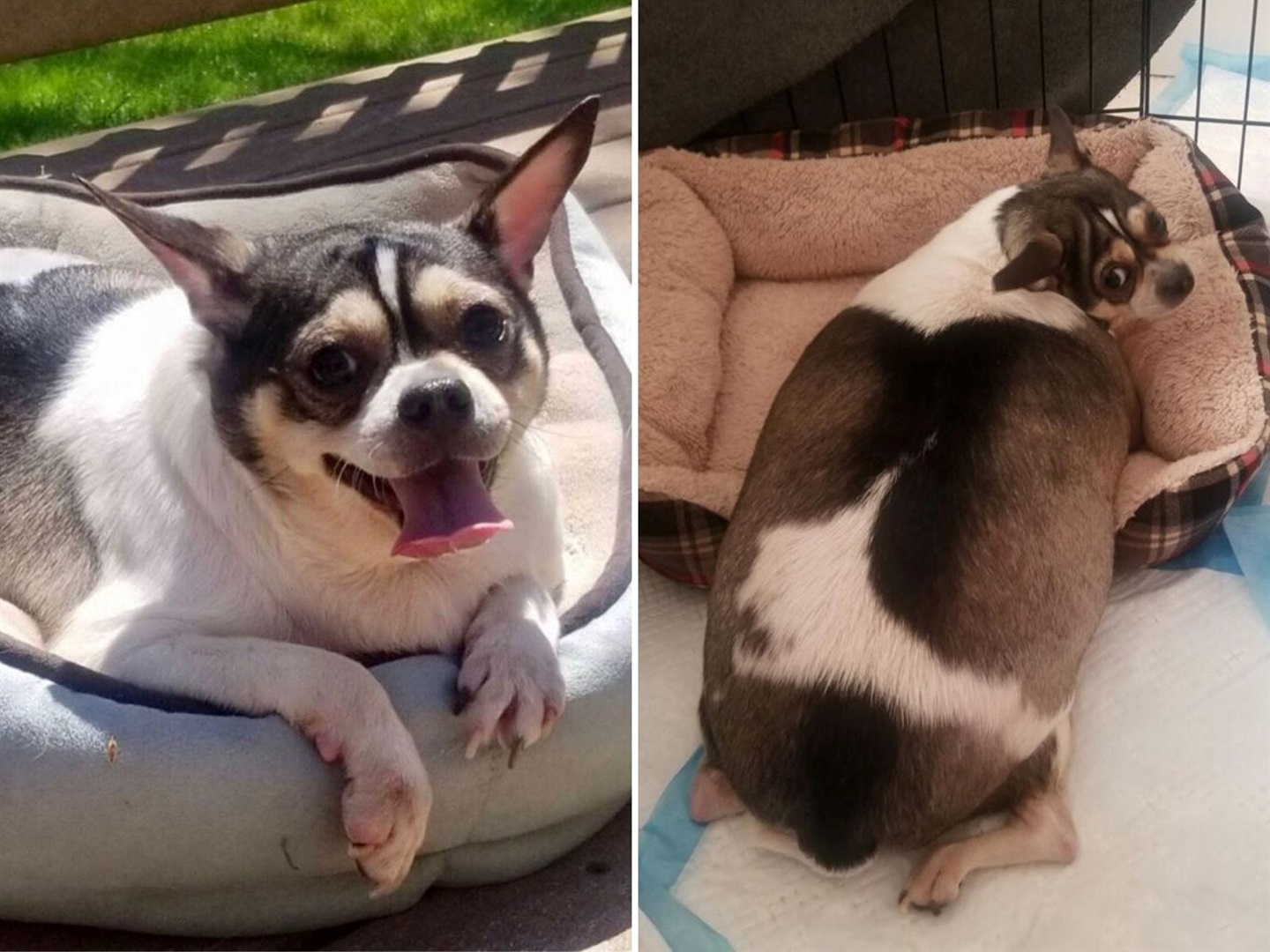 Stanley was locked inside a crate and on the side of Route 80 in New Jersey when he was found.
Ramapo-Bergen Animal Refuge

At the end of April, the overweight chihuahua was rescued by the Ramapo-Bergen Animal Refuge in Oakland, New Jersey, after he was found locked inside a small box on the side of Route 80.

Megan Brinster, the executive director of the animal refuge, told Insider that Stanley was "frozen in fear," but after spending a week at an animal control facility, he was placed with an owner who has experience caring for dogs with medical issues and disabilities.

The owner said they would help Stanley reach a healthy weight because when he was rescued, he weighed around 21 pounds — which is about twice what he should be.

"We know that [Stanley] is just being showered with so much love and affection," Brinster said of his new owner.

In May, a Labrador retriever named Moose received an honorary doctorate degree from Virginia Tech for his service as a therapy dog. Moose has been working as a therapy dog at Virginia Tech's Cook Counseling Center for six years.
Trent Davis

Moose has been working as a therapy dog for six years at Virginia Tech's Cook Counseling Center.

In February, he was diagnosed with prostate cancer, so the university decided to honour him during the 2020 virtual commencement because of all the students he's been able to help.

"It was the right place at the right time because we wanted to honour his years of service," his owner and licensed counselor Trent Davis told Insider. "To honour him knowing that his life span has been shortened by cancer. It's not one of those where we say, 'Well, we will wait another year and give him a degree then.'"

Pilots once volunteered to fly puppies across the US to help them start their training as service dogs. A 9-year-old Italian greyhound named Tika has made waves by being one of the most fashionable dogs on Instagram. Tika's owner, Thomas Shapiro, started an Instagram account for the Italian greyhound in 2016, and it has since racked up thousands of followers.

Shapiro also has an entire line of merchandise dedicated to his fashionable dog and her custom-made outfits.

"It's very important that not only does she look good but feels good too," Shapiro, a software developer in Canada and Tika's owner, told Insider in May. "It's a mix of fashion and practicality, which is what everyone should strive for."

A 2-year-old dog named Milo started going viral on Instagram after his owner shared photos of him with the butterflies he's befriended from her garden. Milo checks on the butterflies every morning.
Jen Bennett

Around the same time, she started raising monarch butterflies in her garden. She told Insider Milo started checking on the butterflies every morning, and he enjoys sniffing and staring at them.

Bennet started an Instagram page dedicated to Milo's adventures in her garden and his interactions with the butterflies, which is now up to over 41,000 followers and growing.

Belinda Richards, a professional pet photographer, launched a series called "Be More Dog" dedicated to showing how human-like pets can be. "It's a Catastrophe" won Richards an award at the Australian Institute of Professional Photography Awards.
Belinda Richards

Australian pet photographer Belinda Richards started her award-winning series "Be More Dog" after a photo shoot in 2018. Richards told Insider the series "is intended as a humorous exploration and commentary of current events, social constructs, and ideology using animals as the stand-in for people."

One of Richards' photos, "It's A Catastrophe," won her the Emerging Photographer of the Year Award at the Australian Institute of Professional Photography Awards because of its commentary on gender roles and the #MeToo movement.

Richard told Insider she chose to "have this story in the newspaper where cats have taken over the world and the dogs are no longer in charge" in the photo. She added that "generally when we speak of cats and dogs we speak of dogs as men and cats as women."

Christian Vieler started taking photos of dogs trying to catch treats in 2013 and has captured over 500 images since. 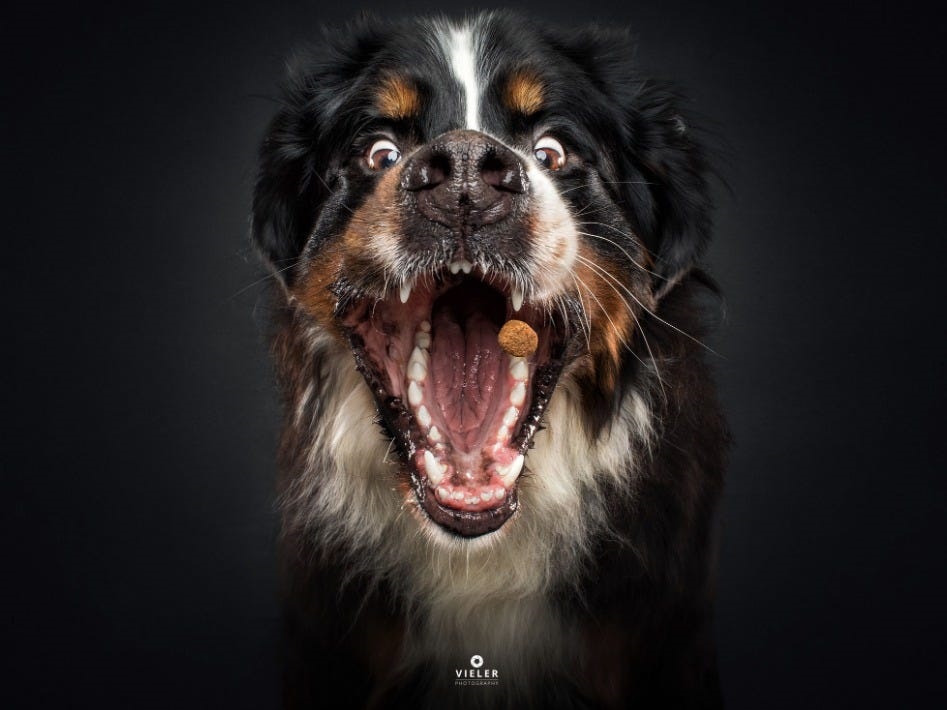 Vieler told Insider he came up with the idea "by accident and chance." He was testing out a new camera and wanted his dog to move around, but she didn't until he threw a treat at her. That's when his series, "Dogs Catching Treats," was born.

"I work with dogs every day. Photographing them is just half of the work. To get good results, understanding and interacting with them is a very important part of my job," he said.

A couple was trying to take a photo of their new wedding bands when their dog, Scooter, snuck his paw into the shot. 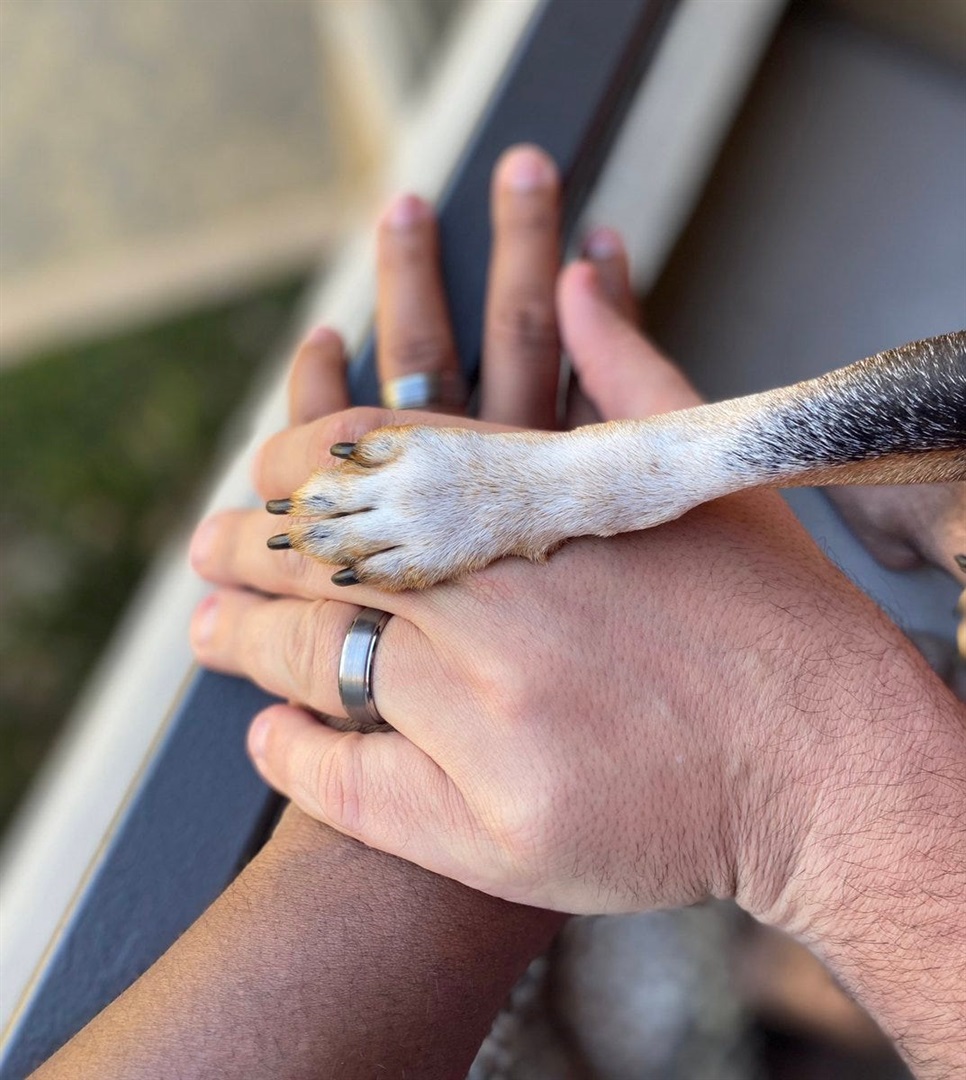 In July, Shon Washington and his husband John were taking a picture of their new wedding rings when Scooter, a 13-year-old miniature Pinscher, put his paw on top of their hands.

"To be honest, I wasn't even paying attention when Scooter did it," Washington told Insider. "I was trying to switch the camera to another setting. John kept saying, 'Look what he's doing.' And when I finally did, it was the perfect photo."

Washington said that Scooter doing something like that was very much in character for him.

"A moment doesn't go by that he isn't working his way between us if we're hanging out on the couch," Washington said. "And he's always on surveillance duty. He suddenly appears whenever there's a quick hug in the kitchen. And, when caught, we immediately pick him up between us and make him into a Scooter sandwich. So, you could say we perpetuate this behaviour."