Not everyone would consider this China beach a "paradise for beach vacationers."
Getty Images

Some places around the world are known as go-to spots for luxury travel, shopping, or experiences.

The Champs Elysées in Paris, for example, with its Louis Vuitton, Cartier, and Longchamp boutiques, is consistently ranked one of the most expensive shopping streets in the world. Dubai boasts of having the most luxurious hotel in the world.

But many find that these and other luxury destinations don't quite live up to the hype. Take a look below for some disappointing photos of what nine luxury hotspots look like in real life.

The Avenue des Champs Elysées in Paris is one of the most iconic streets in the world, lined with museums, high-end restaurants, and five-star hotels.

Shopping opportunities range from retailers such as Zara and H&M to luxury boutiques that include Louis Vuitton, Mont-Blanc, Guerlain, and Ferrari. It's consistently ranked as one of the most expensive shopping streets in the world. But most of the time, you'll hardly be able to move through the throngs of tourists.

The terraces can be as crowded as the sidewalks. Travel + Leisure included the Champs Elysées on its list of the 95 most overrated attractions in the world, noting that apart from the view of the famous Arc de Triomphe and the stores — most of which can be found in other countries — the avenue has very little appeal.

The thought of a Bahamas vacation might conjure up images of relaxing on a boat in serene blue waters ...

... or of strolling along a pristine white beach devoid of any other human life.

But in reality, many find the Bahamas to be "almost like a very expensive Las Vegas," as Quora user Kyle Baley put it. Drinks cost are expensive, the culture is nonexistent, and spring breakers drink irresponsibly and party until 4 a.m., Elysia Cadorniga wrote in the Odyssey Online. Dubai is known for its luxury shopping and hotels, giant malls, and ultra-modern architecture. Rough Guides calls it "one of the world's most glamorous, spectacular and futuristic urban destinations."

It boasts of having the "most luxurious hotel in the world," the Burj Al Arab Jumeirah, which costs a minimum of about $3,500 (R49,000) a night and whose restaurant has a floor-to-ceiling aquarium.

But many visitors to Dubai find it to be completely underwhelming, artificial, and lacking in culture. Foreigners who live there complain of constant construction, and it's landed on several lists of most overrated travel destinations. "Shopping mecca of the Middle East and haven for foreigners and expats. Where else can you ski inside a mall in 32 degree heat? But, guess what? The whole place is fake! Get a real life, go to a real mountain, and ski in real temperatures. You don't need to go to Dubai for this," Suzanne Garber, former chief networking officer at traveler assistance company International SOS, told the Street.

Lonely Planet calls Dalian, China, "one of the most relaxed and liveable cities in the northeast, if not all of China" and highlights its "impressive coastline, complete with swimming beaches."

"This coastal area is a paradise for beach vacationers," according to Travel China Guide.

But beach vacationers will have to fight to get a spot, judging from photos such as this one from Fujiazhuang beach in Dalian on a nearly 32-degree day in 2015. "I went on a weekday and almost could only see the water through banks and banks of locals!" one person wrote on TripAdvisor in October 2013. Another image from a Dalian beach in August 2018 looks much the same. While Dalian is probably a wonderful place to visit overall, prepare yourself for the crowds at the beach. The vineyards of Napa Valley in California are considered to be a top-notch wine destination.

But with its more than three million visitors per year, Napa can quickly get overcrowded and overpriced. Wine tastings in the region have traditionally cost between $5 (R70) and $50 (R704), but high-brow tastings in swanky venues that cost up to $300 are on the rise in Napa, according to Bloomberg. 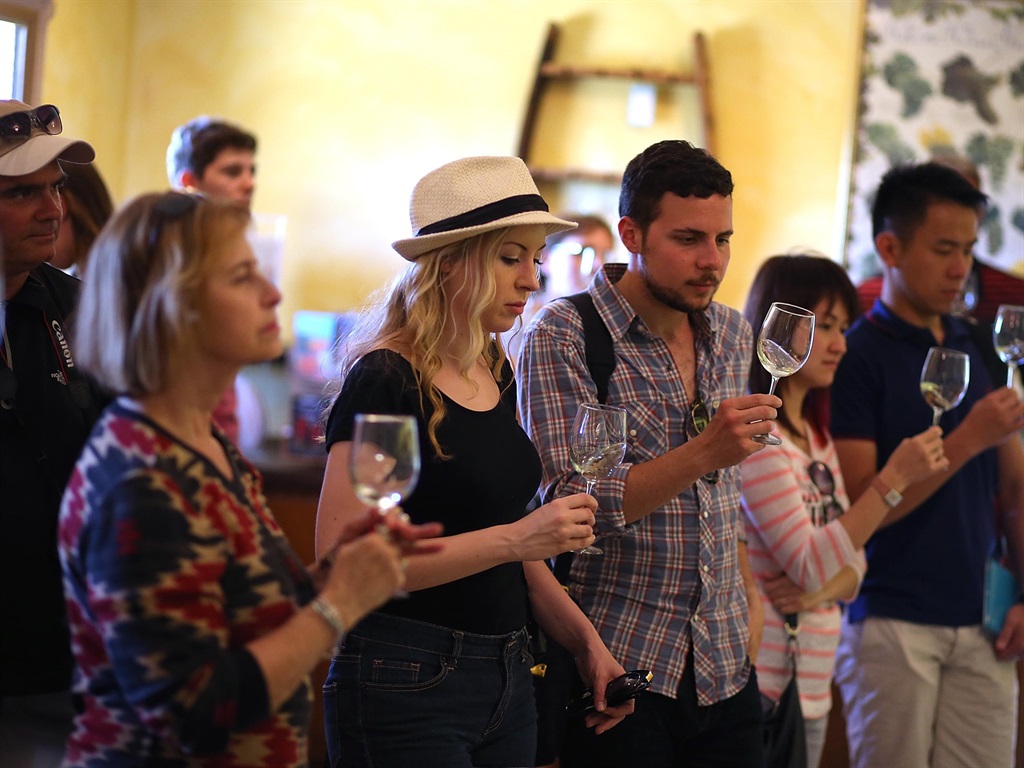 People come to Las Vegas from all over the world to party, gamble, and have their bachelor and bachelorette parties. Those with money to spare can easily spend it on luxury hotels, expensive shows, bottle service at exclusive clubs, and of course, in casinos. But the city isn't always as fun as it seems.

Virtually everything in Vegas is created for tourists, resulting in a lack of authenticity and culture, according to INSIDER's Sarah Schmalbruch.

Las Vegas was voted the most overrated city in the world in a 2015 survey by Yahoo Travel. It could be because of the overpriced cocktails, the ATM fees, or perhaps simply because of the lack of real culture.

It's also very difficult to find a traditional sit-down restaurant near the Strip that isn't overpriced, according to The Travel. "Local restaurants cater to people eating in a hurry (fast food, buffets, etc), so there are only a limited number of traditional restaurants close to the Strip," C. Pennington wrote. "These restaurants are often overcrowded, and they can get expensive."

A serene gondola ride on the canals of Venice might seem like an essential experience to have in "The Floating City."

But you might pay $100 (R1,400) only to be squashed between boats filled with other tourists for 40 minutes. And the streets can be even more crowded than the waterways. There's also very little green space in Venice for tired tourists to escape from the heat and humidity in the summertime, when people tend to visit. With its sandy beaches and abundance of all-inclusive resorts, Cancún, Mexico, has the trappings of an idyllic beach vacation.

But its identity as a spring break hotspot means that during certain parts of the year, the resort city becomes overrun with partying college students.

If you're seeking a relaxing tropical getaway, Cancún might not be the place for you.

The Greek island of Mykonos is known as a vacation and party hotspot for millionaires. Anthony Lassman, cofounder of London-based luxury travel and lifestyle management company Nota Bene Global, told Business Insider that he rents out many top-of-the-line luxury villas on the island. "[We rent] the top houses on the Greek islands. [We have] the very best on Mykonos," he said. But "Mykonos is becoming a little too trendy and exploited," Lassman added. And the prices have gone up to match its popularity. Business Insider correspondent Harrison Jacobs visited the island and found that in order to really enjoy it, you need to be able to spend a lot of money, as evidenced in his stay in the cheapest spot he could find, which ended up being a sparse room with scratchy sheets that cost $130 (R1,800) a night. "Outside of the beaches, the main thing to see in Mykonos is the windmills that sit above the Hora, or main town of the island," Jacobs wrote. "But during sunset, and when the cruise-shippers come in, the area is swarmed with people trying to get selfies." 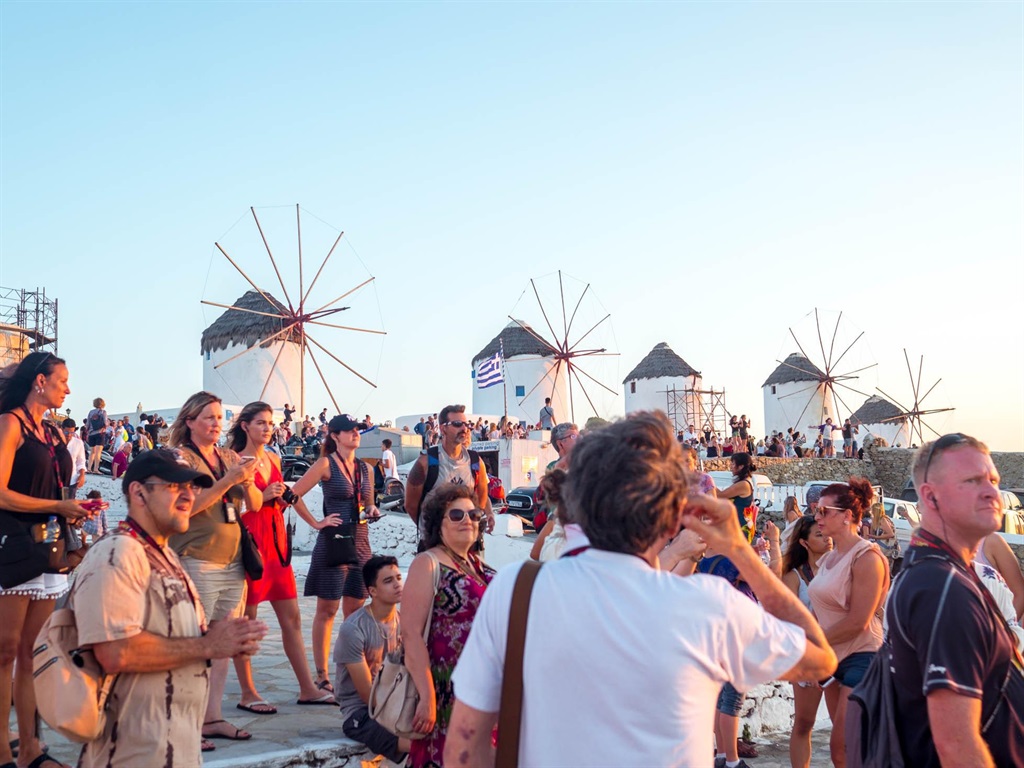