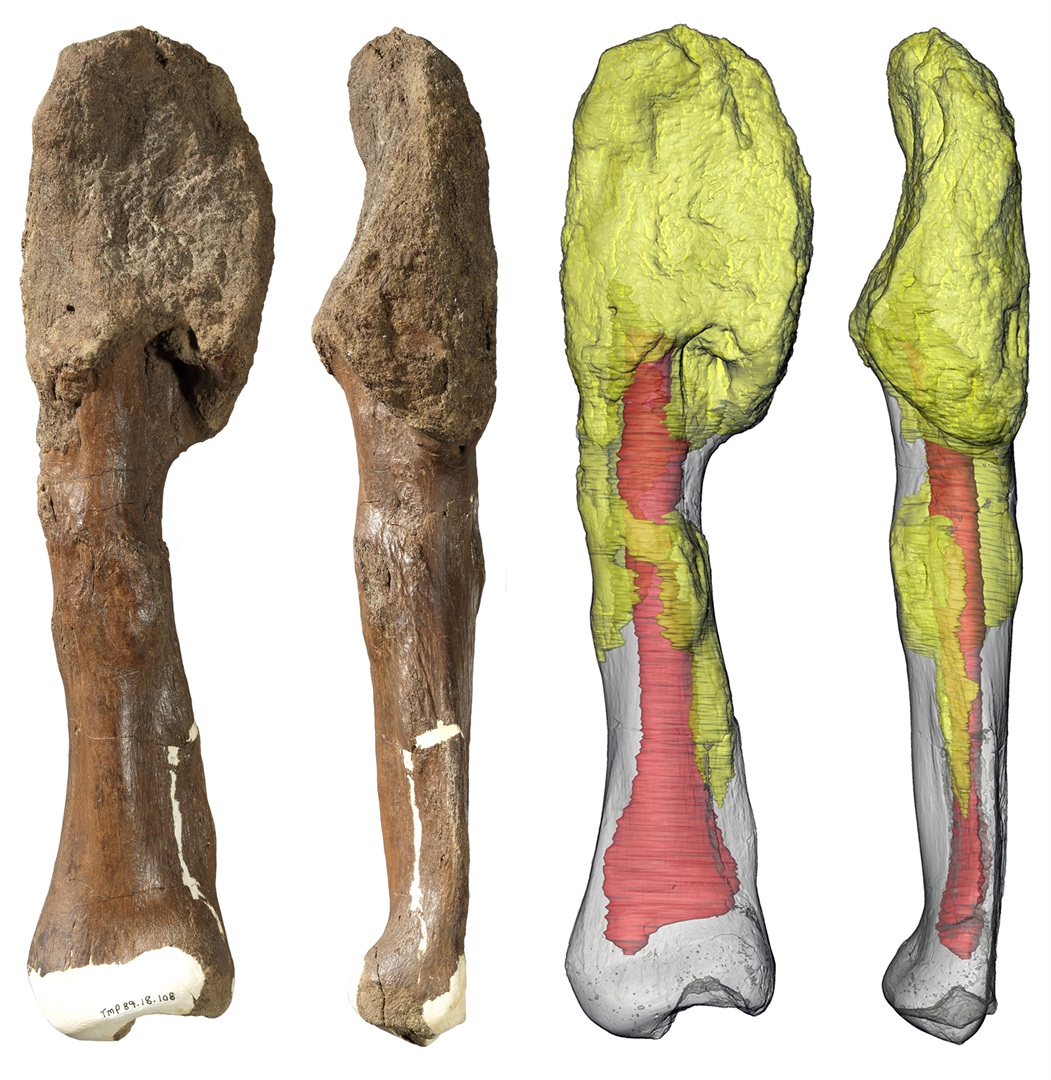 David Evans and Mark Crowther figured they had a good chance of finding a dinosaur with cancer.

Evans, a paleontologist at the Royal Ontario Museum, and Crowther, a hematologist at McMaster University, knew that birds - dinosaurs' closest living relatives - get cancer. And other organisms living around the dinosaur era have shown signs of the disease, too. Researchers have even found tumours in a duck-billed dinosaur, though they didn't confirm a cancer diagnosis.

"Diagnosis of aggressive cancer like this in dinosaurs has been elusive and requires medical expertise and multiple levels of analysis to properly identify," Crowther said in a press release.

The pair searched the massive collection of bones held by the Royal Tyrrell Museum of Paleontology in Alberta, Canada. They saw various dinosaur bones with arthritis, fractures, and even tennis elbow. But only one bone had the characteristics they sought: Its top half had an apple-sized lump, with odd growth extending from the knee to the ankle.

Their findings about that bone, published this week in the journal Lancet Oncology, offer the first confirmed case of malignant cancer in a dinosaur. The results underscore biological links between ancient and modern animals that could help scientists learn more how diseases like cancer have evolved.

How the researchers arrived at a cancer diagnosis A rendering of a Centrosaurus apertus.
Fred Wierum

The bone Evans and Crowther analysed is a fibula, or calf bone, of a Centrosaurus apertus: a Triceratops look-alike that lived 75 to 77 million years ago.

To confirm that the dinosaur had cancer, a team of researchers from an array of fields - including pathology, radiology, orthopaedic surgery, and paleopathology - x-rayed the bone and studied its cellular structure under a microscope.

They also compared the bone to a normal calf bone from the same type of dinosaur, as well as to the amputated calf bone of a 19-year-old human man who'd suffered from the same cancer they suspected the dinosaur had.

At the end of that two-year process, the results showed that the bone was indeed cancerous: The dinosaur was suffering from an aggressive form of osteosarcoma, a type of bone cancer usually diagnosed in young people. The dinosaur's tumour was so large and aggressive that it probably broke the creature's leg, Evans said - the bone they diagnosed was missing part of its top.

"A similarly advanced osteosarcoma in a human patient, left untreated, would certainly be fatal," the researchers wrote.

But in this dinosaur's case, they don't think cancer was its cause of death. The bone was found among thousands of others in a "bone bed" in Canada, part of a herd of Centrosaurus apertus that likely died in a flood. Given that it would have been easy for the sick dinosaur to fall prey to another dinosaur or get left behind, unable to keep up with its herd, Evans think it's possible that other dinosaurs were taking care of it.

"It gives us unique insight into the lives of other dinosaurs," he said, adding, "it's sad to think this dinosaur had cancer, but at least it didn't kill him - at least he died surrounded by his friends."