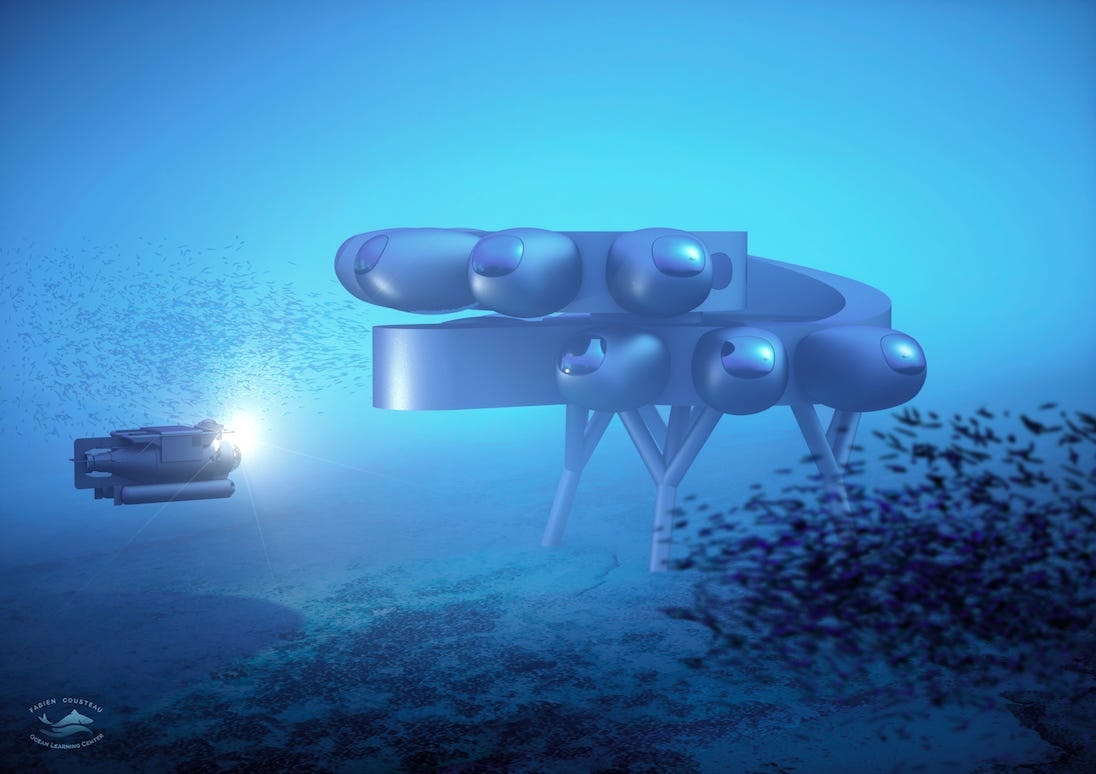 Jacques Cousteau was a pioneer oceanographer and the inventor of the first scuba-diving gear. Now, his grandson, Fabien Cousteau, hopes to build the world's largest underwater habitat.

The younger Cousteau recently revealed designs for Proteus: a two-story, 4,000-square-foot (371.6 square metres) structure named after the Greek sea god. The proposal calls for an underwater research station 10 times bigger than the existing Aquarius Reef Base, which sits off the coast of the Florida Keys.

For now, it's just a concept: Cousteau is looking to raise $135 million (R2.2 billion) to build Proteus 18 metres deep off the coast of Curaçao, in a protected area of the Caribbean. He envisions it as "the underwater version of the International Space Station."

Cousteau worked with designer Yves Béhar and his firm, fuseproject, to sketch out the proposed research station. The team hopes that if completed, Proteus could help scientists better study the impacts of climate change and plastic pollution on the world's oceans.

"The knowledge that will be uncovered underwater will forever change the way generations of humans live up above," Cousteau said in a press release.

He also hopes Proteus could serve as a training ground for astronauts by helping them learn how to live and work in extreme environments akin to that of space.

An underwater version of the International Space Station Cousteau, founder of the non-profit Fabien Cousteau Ocean Learning Center, has been scuba diving since age 4.

After he met Béhar in 2018, the two worked for two years to design an underwater habitat that Cousteau had been envisioning.

The resulting proposal calls for a circular habitat with two floors connected by a curved ramp. The space would include social areas and workspaces, research labs, as well as a communication studio. Pods jutting out from the structure would serve as sleeping quarters and bathrooms for up to 12 occupants.

The design also includes what would be the first underwater greenhouse.

Béhar said his ideas were inspired by "Twenty Thousand Leagues Under the Sea."

Proteus would be more advanced than the only other underwater habitat

Since then, various other aquatic habitats have been built and subsequently removed. Today, only one remains: the 400-square-foot (37 square metres) Aquarius Reef Base.

The base was designed to mirror life on the International Space Station — it has air conditioning, WiFi, and indoor plumbing. NASA's Extreme Environment Mission Operations group even sends astronauts to live there, since they can experience near-zero gravity and practice operating with limited mobility in a confined space.

Similarly, Cousteau and Béhar said they hope Proteus might also eventually serve as "a great test bed for astronauts training for space exploration, both physically and psychologically." Fabien Cousteau spent 31 days on the Aquarius base six years ago. But he said living in the habitat was challenging given the high humidity, lack of fresh food, and social isolation. Proteus's design aims to address those issues.

Research under the waves

Building Proteus wouldn't be the trickiest bit of Cousteau's venture — getting it to a depth of 18 metres is the hard part.

If construction were to be completed on land, Béhar said, then "you need to fill the structure with water, sink it, and attach it to bottom of the ocean."

"In many ways, Proteus is our generation's moon landing," he said in the release.

Difficulties aside, an underwater research station like this would be a boon to scientists, since it'd grant them opportunities to collect data for longer periods of time than what short-term dives afford.

"Now, all of a sudden, we have a house at the bottom of the sea, and we're able to go into the water, and dive 10 to 12 hours a day to do research, science, and filming," he told Smithsonian. An added bonus would be that researchers could collect samples to analyze inside the habitat, rather than having to transport them to the surface for study, which can cause degradation.

"The innovation cycle will be shortened by having a true laboratory underwater, rather than a simple living space like prior underwater habitats," Mark Patterson, a marine scientist and member of the Cousteau Center's board, said in a press release.

In particular, Cousteau hopes Proteus could one day help researchers tackle the problem of plastic pollution and study the impacts of climate change on ocean ecosystems.