13 photos that show how humans have changed the world's forests Deforestation in action.
Andre Penner
Every year, roughly 9 million hectares of forest disappear, according to the World Wildlife Fund.

Deforestation, pollution, climate change, and old fashioned human carelessness are wreaking havoc on the world's forests. In the past few weeks, the Brazilian Amazon has been burning at a record rate. Some of these fires were started by farmers and loggers seeking to use Amazonian land for industrial or agricultural purposes.

Here are 13 photos that show just how much our forests have changed.

Parts of the Amazon rain forest contain ponds of dirty water left over from hydraulic mining. 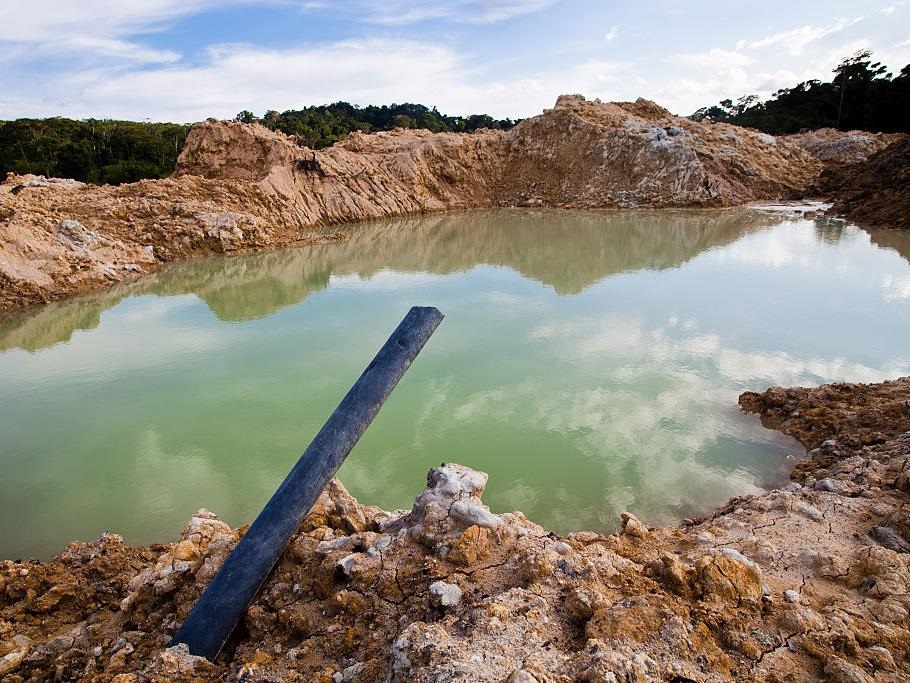 Illegal gold mining in Peru has wreaked havoc on its forests.

In addition to destroying parts of the Amazon jungle, "wildcat mining" drives child labor and sex trafficking in the region, according to NBC News. Peru's government declared a state of emergency in February, enlisting its military to eliminate illegal mining machinery.

SBS News reports that illegal logging in the Amazon in Brazil contributed to a 14% increase in deforested land last year.

The Interoceanic Highway connecting Peru and Brazil through the Amazon rain forest was built for economic growth, but has resulted in drastic deforestation. In Iberia, a Peruvian town located along the Interoceanic Highway, many of its residents rely on harvesting latex from the forest as a source of income. Iberia's deforestation levels steadily climbed from low to medium to high between 2012 and 2015, according to Monitoring of the Andean Amazon Project (MAAP). Brazil is the world's top exporter of beef, and the second top soy exporter behind the US. Farmers raze the rainforest to keep up with the global demand.

Brazil's president, Jair Bolsonaro, has expressed plans to cut down more of the Amazon, prompting concerns from scientists and indigenous communities.

Bolsonaro plans to cut down more of the Amazon rain forest, saying that too many environmentally protected areas are hampering the country's development. Business Insider previously reported that indigenous communities are calling for the creation of a "sacred corridor of life and culture" that would span the Amazon from the Andes mountains to the Atlantic Ocean.

It's not just the Amazon rain forest experiencing deforestation. Sudan lost 8.4% of its forest cover between 1990 and 2010.

Sudan's charcoal and fuel wood trades are partially to blame for the loss of forest.

As more of India's forests disappears, wildlife is being pushed into populated areas.

In 2017, Indian forest guards removed a leopard from a residential area at the state zoological park in Guwahati, Assam.

Borneo, Malaysia, has lost half of its forest cover at a rate of 1.3 million hectares per year, according to the World Wildlife Fund. Deforestation due to logging, forest fires, and palm oil plantations has forced local tribes from their ancestral homelands and endangered animals such as orangutans, leopards, and elephants.

Indonesia's forest is a quarter of the size of the Amazon, but it lost more hectares of forest in 2012. Indonesia lost 840,000 hectares of forest in 2012 compared to 460,000 hectares in Brazil, according to a report in the Nature Climate Change journal. Palm oil, pulp, and paper production has increased greenhouse gas emissions and endangered the local population of tigers.

Deforestation can have serious environmental consequences. Slash-and-burn forest fires may be an efficient way to clear land for new plantations, but they pollute the air with haze. Air quality in Queenstown, Singapore, reached unhealthy levels due to slash and burn fires in 2016.

Human carelessness is also a factor in damage to forests, such as the garbage dump in Indonesia's Pisang Batu River. Nearly half of Indonesia's annual 3.2 million tons of plastic waste ends up in the ocean, according to a 2015 study.

During the 2019 government shutdown, Joshua Tree National Park in California suffered damage that could take centuries to recover from. National parks around the US faced sanitation and vandalism issues during the 2019 government shutdown over President Trump's proposed border wall because of minimal staffing. Joshua Tree National Park was hit particularly hard, with vandals spraying rocks with graffiti and cutting down its namesake trees. The damage could take 200 to 300 years to repair, The New York Times reported.

Related Links
Tim Cook says Apple will be donating to help preserve the Amazon in the wake of devastating...
We've killed off more than 50% of forest animals on Earth, a new report found — even more...
A pile of manure in Spain spontaneously ignited in Europe's record heatwave, and started a forest...
Next on Business Insider
Cristiano Ronaldo has been eating alone at Manchester United, report says - manager may let him leave