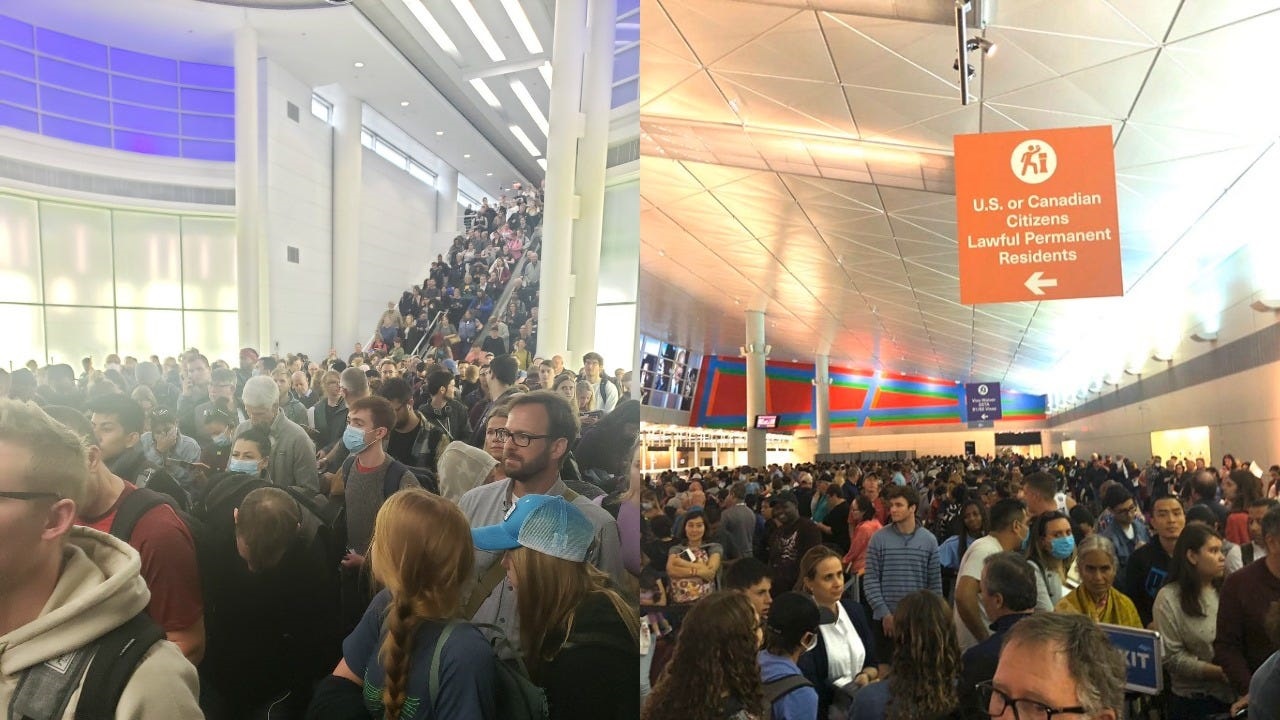 Passengers and news outlets tweeted out images of massive crowds at major US airports not long after President Donald Trump's travel ban amid the coronavirus outbreak.
Twitter/@katyslittlefarm; Twitter/@drunktweetn

News outlets and passengers shared photos and videos of packed airport terminals at O'Hare airport in Chicago, Washington-Dulles in Virginia, and Dallas/Fort Worth airport in Texas as travellers awaited customs screening.

"Good God. You could hardly invent a better scenario for superspreading events," tweeted Jeremy Konyndyk, a senior policy fellow at the Center for Global Development. "Any cases of COVID in these crowds will have a far higher chance of spreading to others in these lines than if they were just allowed in unchecked."

Another expert, biology professor Carl Bergstrom of the University of Washington, tweeted that the crowds were "a perfect storm for creating massive case clusters."

He continued: "To be clear, this is an absolute failing of policy and planning. This could have been entirely avoided. And now it will *without doubt* accelerate the epidemic of #COVID19 #coronavirus with the US."

The travel restrictions come amid a growing coronavirus crisis across the world and within the US. In response to the pandemic, Trump suspended travel from many European countries for 30 days.

American travellers, legal permanent residents, and family members of both categories were exempt from the travel ban, but have had flights redirected and funneled into just 13 major US airports for enhanced screening.

At those airports - which include O'Hare, Dulles, and DFW - passengers were being asked about their medical history and current condition, and directed to self-quarantine for 14 days, according to the Department of Homeland Security.

DHS had warned on Friday that the new procedure might be "disruptive," but that the policies were meant to "protect the general public from further exposure and spread of the coronavirus."

One passenger told WGN News she waited up to four hours in the line-ups at O'Hare.

Illinois Gov. JB Pritzker appeared incensed on Saturday night, tweeting that the crowds were "unacceptable & need to be addressed immediately."

Prizker said the hold-up was due to the customs process, which is managed by the federal Customs and Border Protection agency.

"The federal government needs to get its s@#t together. NOW," Pritzker tweeted.

The crowds & lines Oâ€™Hare are unacceptable & need to be addressed immediately.@realDonaldTrump @VP since this is the only communication medium you pay attention toâ€”you need to do something NOW.

These crowds are waiting to get through customs which is under federal jurisdiction — Governor JB Pritzker (@GovPritzker) March 15, 2020

O'Hare airport publicly acknowledged the situation, tweeting that staff was working with federal officials to prioritise screenings for elderly passengers and those traveling with young children.

The airport said it was also providing snacks and bottled water to those waiting in "longer-than-usual customs processing lines."