CrossFit gyms in South Africa have threatened to cut ties with the US brand amid its founder’s controversial views on the Black Lives Matter protests and the death of George Floyd.

Greg Glassman was forced to step down this week.

According to a Buzzfeed report,  Glassman downplayed the protests demanding justice for Floyd – a black man who died after a white police officer knelt on his neck for over 8 minutes -  in a virtual meeting with affiliated gym owners.

"We're not mourning for George Floyd — I don't think me or any of my staff are," Glassman reportedly said during a meeting.

Then, he tweeted "It's FLOYD-19" on Saturday in response to a post classifying racism and discrimination as a public health issue. The controversial tweet was called out by Twitter users for being tone-deaf, racist, and insensitive.

Your failed model quarantined us and now you're going to model a solution to racism? George Floyd's brutal murder sparked riots nationally. Quarantine alone is "accompanied in every age and under all political regimes by an undercurrent of suspicion, distrust, and riots." Thanks!

In the US, gyms, and brands like Reebok, cancelled partnerships and affiliations with CrossFit in light of Glassman's response.

In South Africa too, gyms affiliated with CrossFit want to cut their ties with the brand.

"The statements that (Glassman) made are completely wrong and disrespectful and cannot be ignored. As (a) result we will not be renewing our CrossFit affiliation," CrossFit Wanderers said in a statement.

“We don’t want to be associated with a brand that has that kind of thought process,” said Devon Daniels, owner and head coach at CrossFit Fetish in Durban. "Until we get a better plan or focus from them, we will not be renewing our affiliation with them."

Black River CrossFit in Cape Town also said it won’t be renewing its CrossFit affiliation "until we once again feel like we are aligned as partners".

"Unfortunately it has taken one person to ruin what is actually a good methodology and life altering journey for most," says Fitness Technologies and CrossFit Platinum in Johannesburg.

CrossFit has been in South Africa for over a decade  and now has 144 affiliates countrywide.  The gym programme focuses on high intensity interval-training through strength and conditioning training and has become so popular that it even hosts its own World Games.

"We are in a very sensitive time where we are still processing and analysing what we believe to be the right way forward. In short we have had conversations with members to ensure they know our stance as an all-inclusive community, and we have had a huge support for how we've chosen to act so far," Chris Oman, CEO of Cape CrossFit, told Business Insider.

The Cape Town-based Cape CrossFit represents gyms at Gardens, Newlands and Century City and was among the affiliates stating on its Facebook page that it "strongly disagreed with the comment" and "can’t just move on". 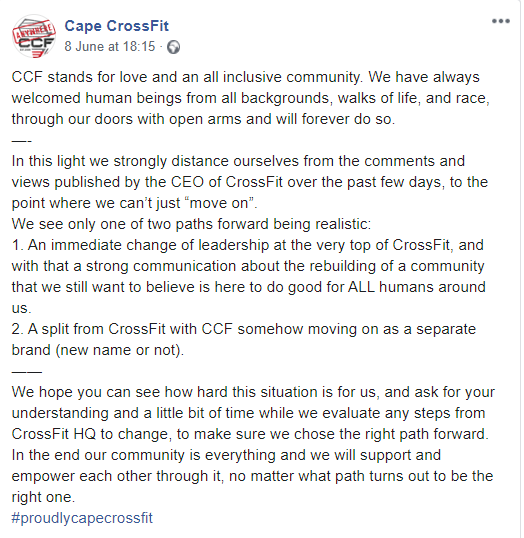 Here are other gyms across the country that posted statements on their social media accounts: