A journalist in India live-tweeted his worsening Covid-19 symptoms, then died before he could get help 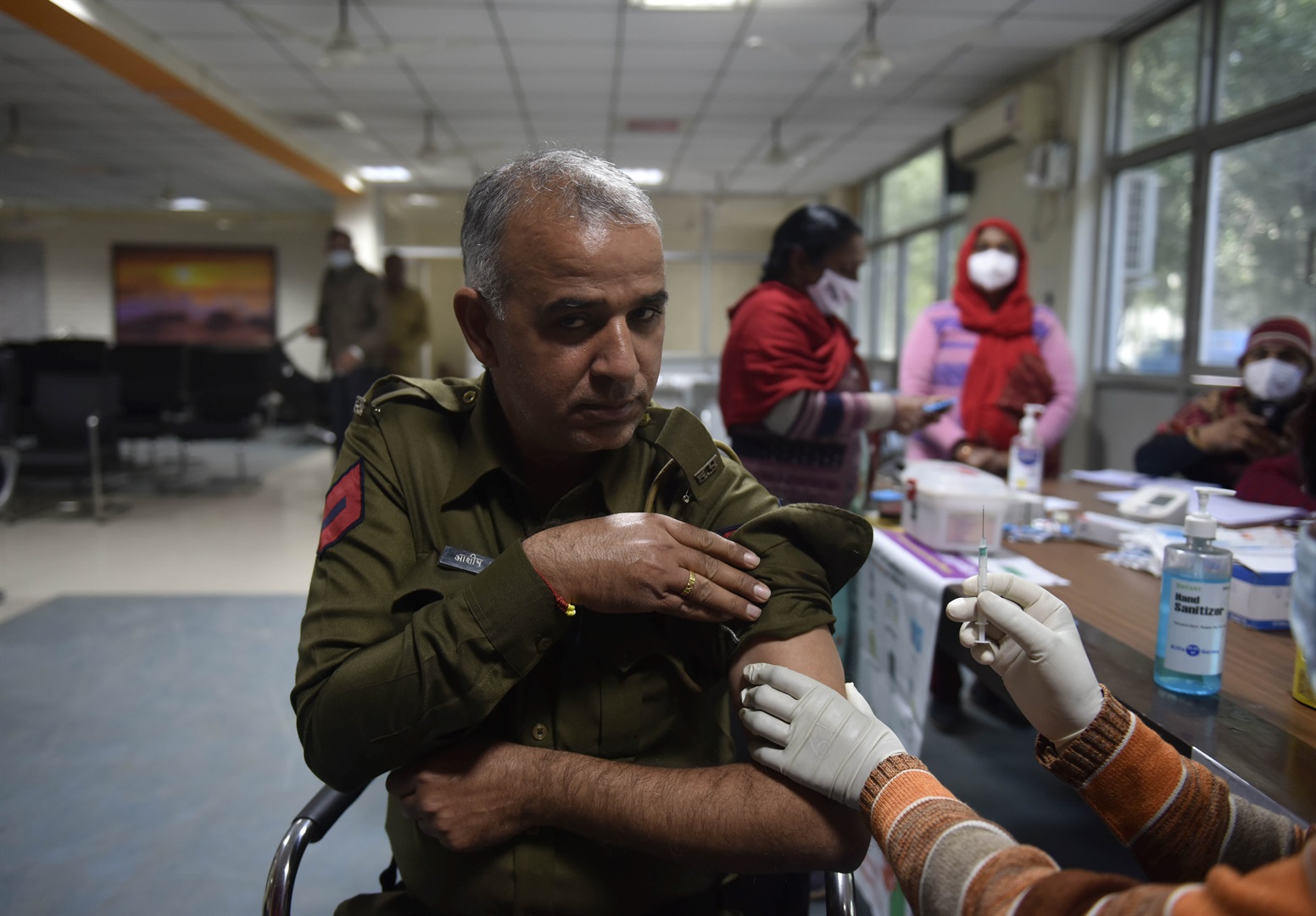 A health worker administers the AstraZeneca vaccine to a member of the Gurugram Police in Gurugram, India on February 5, 2021.
Vipin Kumar/Hindustan Times/Getty Images

A journalist in India died of Covid-19 symptoms on Saturday after tweeting his declining oxygen levels in a desperate search for medical help.

Vinay Srivastava ultimately died without medical care. His death was a stark moment in India's spiraling coronavirus crisis, where reports of new infections have repeatedly exceeded 250,000 per day in the past week. Srivastava, from the northern state of Lucknow, was denied medical care because he lacked crucial paperwork, according to Indian media.

On Friday he tweeted in Hindi that his oxygen levels had dropped to 52 - far below the normal levels of 95 or above.

"I am 65 years old. Plus I have spondylitis, due to which my oxygen has reduced to 52. Nobody at the hospital lab, or the doctor is picking the phone," said one translation, by Vice. Spondylitis is a spinal condition.

As his tweet gained attention, one person told him to "have faith," according to Vice. To which Srivastava replied, per Vice's translation: "For how long should I keep the faith? Now my oxygen level is 50, and the guard at the Balrampur hospital is not letting me enter."

When a health official responded, asking for further details, Srivastava responded first with an image of a pulse oximeter reading 31, and then by tweeting in English: "Now my oxygen is 31 when some will come"

He died on Saturday, having received no medical care, according to Indian online newspaper The Print.

Srivastava died the same day that India overtook Brazil to become the country with the second-largest number of reported Covid-19 cases. The first remains the US.

Experts say that due to low rates of testing, India may well have much worse Covid-19 rates than either country that ranks near it, Time reported. A new variant first identified in the country has complicated efforts further.

Regardless of the true figure, India's reported cases have skyrocketed to an all-time high, with nearly 260,000 new cases and 1,760 deaths reported Monday, according to Johns Hopkins University's case tracker.

Despite being the world's largest vaccine manufacturer, the country is struggling to secure enough for its own population.

In Srivastava's state of Uttar Pradesh, a critical shortage means only 2.29% of the state's population has been vaccinated, Vice reported.

Dr. Surya Pratap Singh, an administrative officer in Lucknow, tweeted an image of Srivastava's covered body and his family grieving nearby, according to Newsweek.

The outlet translated Singh's tweet as saying: "The plea of journalist Vinay Srivastava was not heard while he was alive, but even after his death, his family kept waiting for the ambulance.

"Looking at the example of image/symbol of the government 'chaos,' my eyes were filled with tears," he reportedly added.

The situation has been worsened by complicated barriers to healthcare - as Srivastava's family described to The Print.

His son Harshit described how he appealed to medical authorities for help. But Srivastava could not be admitted to hospital without a letter from the Chief Medical Officer (CMO)'s office, the outlet said.

Harshit described approaching three hospitals, which refused to take his father, before heading to the CMO office in Lucknow, where he waited for three hours.

Returning home without a letter, he managed to borrow an oxygen tank from a family member, but still needed to fill it.

"We ran from pillar to post, but could not get an oxygen cylinder for him," he told The Print. "A relative lent us his own cylinder. I went to get it refilled at midnight. There was a long queue for that too, I had to fight with others to save my father."

According to The Print, the policy of requiring a CMO's letter - in place since last April - has been lifted since Srivastava's death.

Lucknow's Chief Minister Yogi Adityanath said that an additional 4,000 hospital beds would be made available, and announced tightened Covid-19 restrictions, The Hindu reported on Saturday.

Related Links
India now has 15 million Covid-19 cases, and a new variant has been identified there
A record 5.2 million people globally tested positive for Covid-19 last week, despite vaccine...
India is the world's biggest vaccine producer but it's struggling to get enough Covid-19 vaccines...
Next on Business Insider
CEO who went viral for crying about axing employees says 'a lot of good' has come from his LinkedIn post