Christine Utley and Drew Sanza had a footman carry their wedding rings in a glass slipper at their Disneyland wedding.

Christine Utley and Drew Sanza are Disney superfans who have been together since 2013. The California-based couple met on OkCupid "before Tinder was cool," as Utley puts it.

They had been together for just over six years when they got married in September 2019, a week after Utley's birthday.

The couple knew they wanted to make Disney a focus of their wedding day. "We have annual passes, and we go all the time. Whether it's just to circle the park on a walk, have a corn dog, or indulge in all the sweets we walk by, it's always a fun time."

"We wanted our guests to have the best night of their lives, leave the everyday stresses behind, and be a kid again," she said of their decision to make their wedding Disney-themed.

The couple got married in the Rose Court Garden at the Disneyland Hotel. "Our ceremony was at the beautiful Disneyland Rose Court Garden and the reception was at the Disneyland Sleeping Beauty Pavilion," Utley told Insider.

The couple also hired a planner from Disney, Hannah Dodd, to make the big day a reality. The Disney touches started with the decor at the ceremony.

"Keeping with the tradition of hidden Mickeys throughout Disneyland, our flower spread on the rose court garden gazebo included a beautiful floral Mickey head arrangement of white hydrangeas," Utley said.

The Mickey head flowers were white to make it stand out. 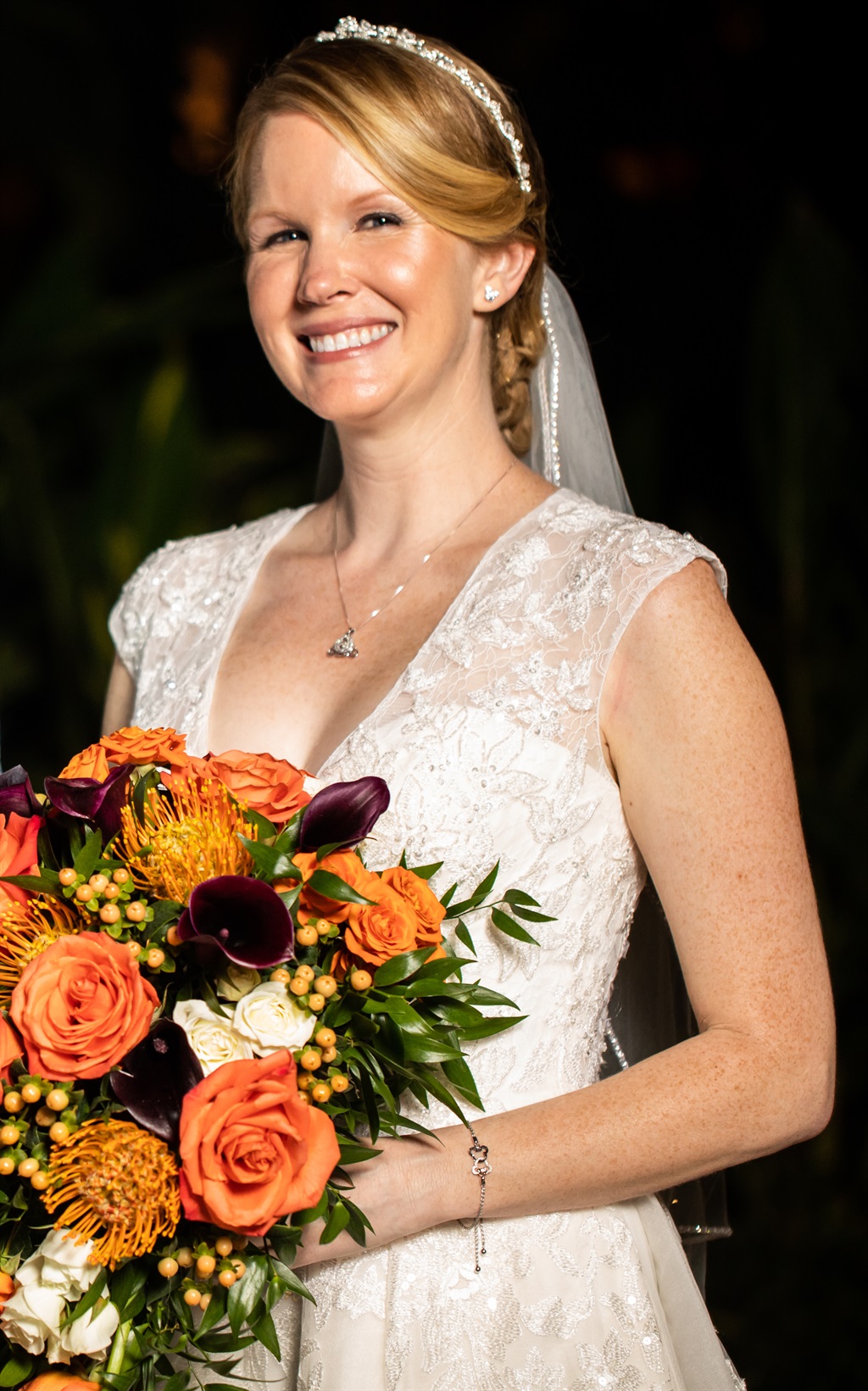 All of Utley's wedding jewelry was Disney-themed.

"I wore Mickey-shaped diamond earrings, a Mickey and Minnie diamond bracelet that Drew gifted me before the wedding, and a carriage necklace that my mom gifted me right before I walked down the aisle," she said. Utley sported sneakers with "Mrs." and "Sanza" written on them in the iconic Disney font.

The Mrs. featured a heart after it instead of a period.

The couple's officiant also got in on the Disney magic. 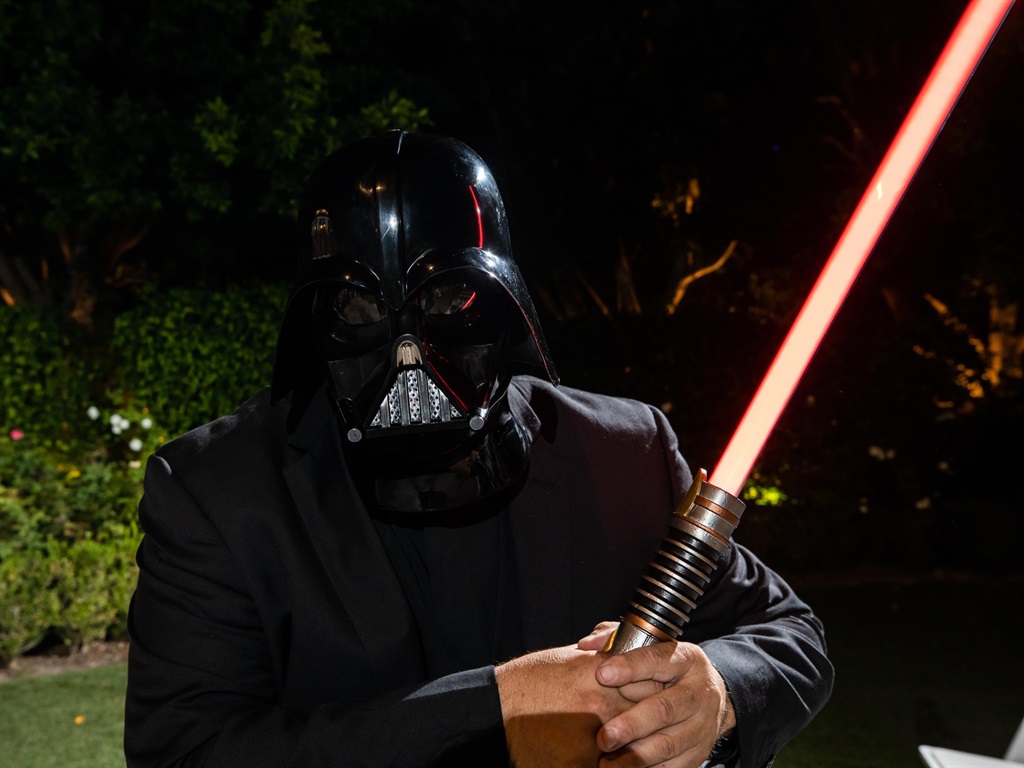 "Our officiant, Alan Katz, arrived in a Darth Vader ensemble as he walked to the ceremony gazebo - mask and all," Utley said.

Katz also carried his ceremony notes in a Mickey portfolio. The smiling Mickey added to the magic of the ceremony.

Guests found Disney accessories on their chairs at the ceremony. "When guests arrived at the ceremony, select seats were equipped with lightsabers and Mickey bubble wands to be used during the exit of our ceremony," Utley told Insider.

Utley arrived at the ceremony in a horse-drawn carriage, which was a surprise on her wedding day. "When I was approaching the ceremony, I saw a horse and carriage on the pathway," she said.

"The carriage was lit up and was just beautiful," she said.

The most elaborate touch to the wedding was the footman who carried the couple's rings in a glass slipper. The footman was dressed in a costume, including a wig and hat.

"Everyone loved our footman. He fit the part perfectly," Utley said.

The wedding rings were nestled in the shoe. "He held a satin pillow with a glass slipper on it, which held both of our rings," Utley said.

The "Cinderella"-themed addition turned out to be one of the best parts of the wedding.

"It was truly a magical experience to see him walking down the aisle to deliver the rings," Utley said. "He bent down on one knee at the steps where we were standing and we said our vows," Utley said of the footman.

The theme carried over to the reception. "They entered the reception at the Sleeping Beauty Pavilion to find a kissing Mickey and Minnie silhouette projected on the dance floor," Utley said of her guests.

"When the guests were all seated, we entered the room with Drew dressed as Darth Vader and Christine as a Stormtrooper," the couple added.

"We did a funny skit that all the guests loved."

The welcome table was filled with Disney touches. "We had a giant Mickey head made out of 760 Dum Dums that included two park hopper tickets to Disneyland for the person who guessed the correct amount of lollipops at the stroke of midnight," Utley said.

"Foregoing the traditional guest book, we had a glass-front wood castle with wood hearts for people to sign."

Utley told Insider that the couple's guests loved the wedding as much as they did. "Everyone still says to this day that it was the most fun, original, and beautiful wedding they have ever seen," she said.

The couple has some advice for anyone looking to have a Disney wedding: "Have fun with it."

Christine Utley and Drew Sanza had a footman carry their wedding rings in a glass slipper at their Disneyland wedding.
D. Park Photography

"There are so many Disney touches that you can be creative with and add to your wedding," Utley said.

"Everyone loves to be a kid again, even if it's just for one night."