I was one of the first 1,000 people to attend live sport in the UK since Covid-19. Here's what it's like Yes, that is a Taylor Swift cap.

In just months, the idea of watching our favourite teams while packed into a stadium with tens of thousands of other fans has gone from a normal, fun thing to do, to something completely alien, and frankly, a somewhat terrifying idea.

After a substantial hiatus, sports in most European and North American countries have now restarted. The English Premier League season has concluded behind closed doors, and the NBA tournament in Florida is about to kick off,and in Abu Dhabi, the UFC has just concluded a three-week extravaganza of fighting.

What is still missing from all these sports, however, is fans.

While leagues like the Premier League and the NBA are being carried out in so-called "bubbles" - where no one involved is allowed in or out of a designated area - crowds will eventually return to sport at some point, and in some places that point could be sooner rather than later.

In the UK, as part of the government's plan to get life back to something like normal, several sports are carrying out experiments with reintroducing crowds, bringing back small numbers of fans in a controlled, and hopefully safe, environment.

Events with pilot schemes for the reintroduction of crowds in the UK include horse racing, snooker, and a professional cricket game.

As a die-hard fan and long-time member of the mighty Surrey County Cricket Club (C'MON THE REY!) I had the opportunity last week to take part in a crowd pilot that was being carried out during a specially arranged friendly game of cricket between Surrey and their rivals Middlesex.

The game saw 1,000 fans attend professional sport in the UK for the first time since March. Here's what it was like.

The venue for the first professional sporting event with a crowd in the UK since March was The Kia Oval, a cricket stadium in the south London district of Kennington. The Oval is one of the UK's biggest cricket stadiums, and in normal times seats in excess of 23,000 people. During big games, every seat in the house is almost always full. For the uninitiated, both teams are part of the UK's county cricket system - the highest level of domestic cricket.

Both teams play in London, with Surrey based at The Oval, and Middlesex based at Lord's - colloquially known as the Home of Cricket - in a north London area called St. John's Wood.

Part of the reason the fixture was chosen was the short distance between the two teams' bases. Driving from Lord's to The Oval takes, on a good day, just over 30 minutes.

Rather than just reintroducing fans on a normal scale, the government in the UK is allowing only small crowds to attend pilot fixtures. If you're unfamiliar with cricket, it is often a multi-day affair, with the longest format of the game lasting five consecutive days. This game was to take place over the course of two days, a Sunday and a Monday and was almost guaranteed to end in a tie.

To secure a ticket, members had to take the very old-fashioned step of calling Surrey's ticket office. No online tickets were available. Getting through was a nightmare. I called 14 times before getting an answer. In a BBC radio interview on Sunday, Surrey's chief executive Richard Gould said the club received 10,000 calls in the first hour of ticket lines being open. No wonder it took a while to get through.

Once my call was answered, I secured my ticket in seconds, free of charge.

While games themselves are possible a flashpoint for coronavirus cases, getting to the stadium is another area that authorities are worried about. 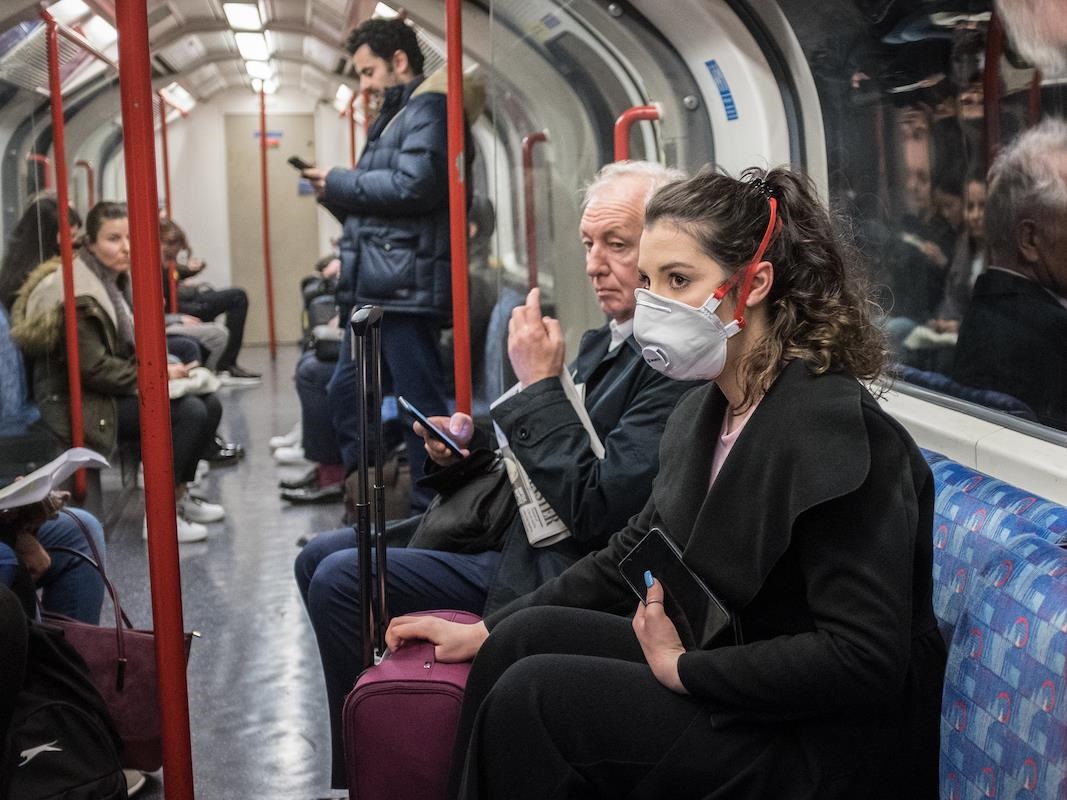 Luckily for me, I live close to the Oval and was able to cycle to the ground in under 10 minutes, leaving my bike chained up outside.

If I had got public transport, I'd have been required to wear a mask at all times, as mandated by the UK government.

One of the great joys of cricket is that you can basically turn up whenever you want and not really miss much action. Play on Sunday started at 11 a.m, but I turned up at around midday. Upon arrival, the entry process was pretty much the same as normal. Turn up, show your ticket to a steward, and then walk into the ground. One small difference was that entry points were more spread out than before. 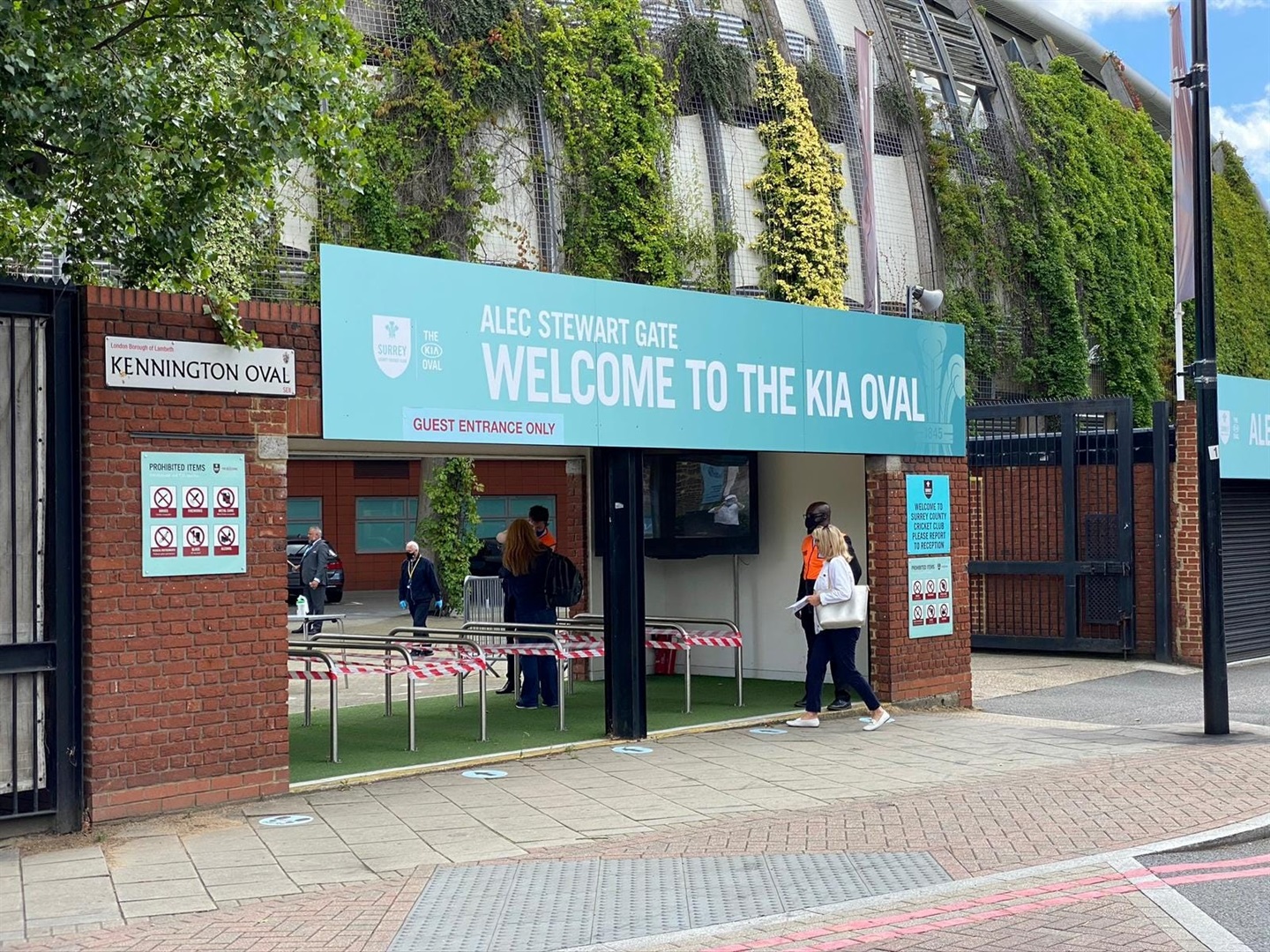 Another difference to the pre-virus era was that only one gate was available. The Oval has two main entrances - one on either side of the ground - but for the pilot match, just the Alec Stewart Gate, named for a club legend, was open.

Once inside the ground, there was ample signage encouraging social distancing, plentiful hand sanitiser stations, and a well signposted one-way system for walking around the stadium. A (masked, of course) steward asked to see my ticket, told me exactly where my seat was, and then pointed me into the right part of the one-way system. I was to walk down the left-hand side of the path around the ground, while anyone going the other way, had to walk on the other side. 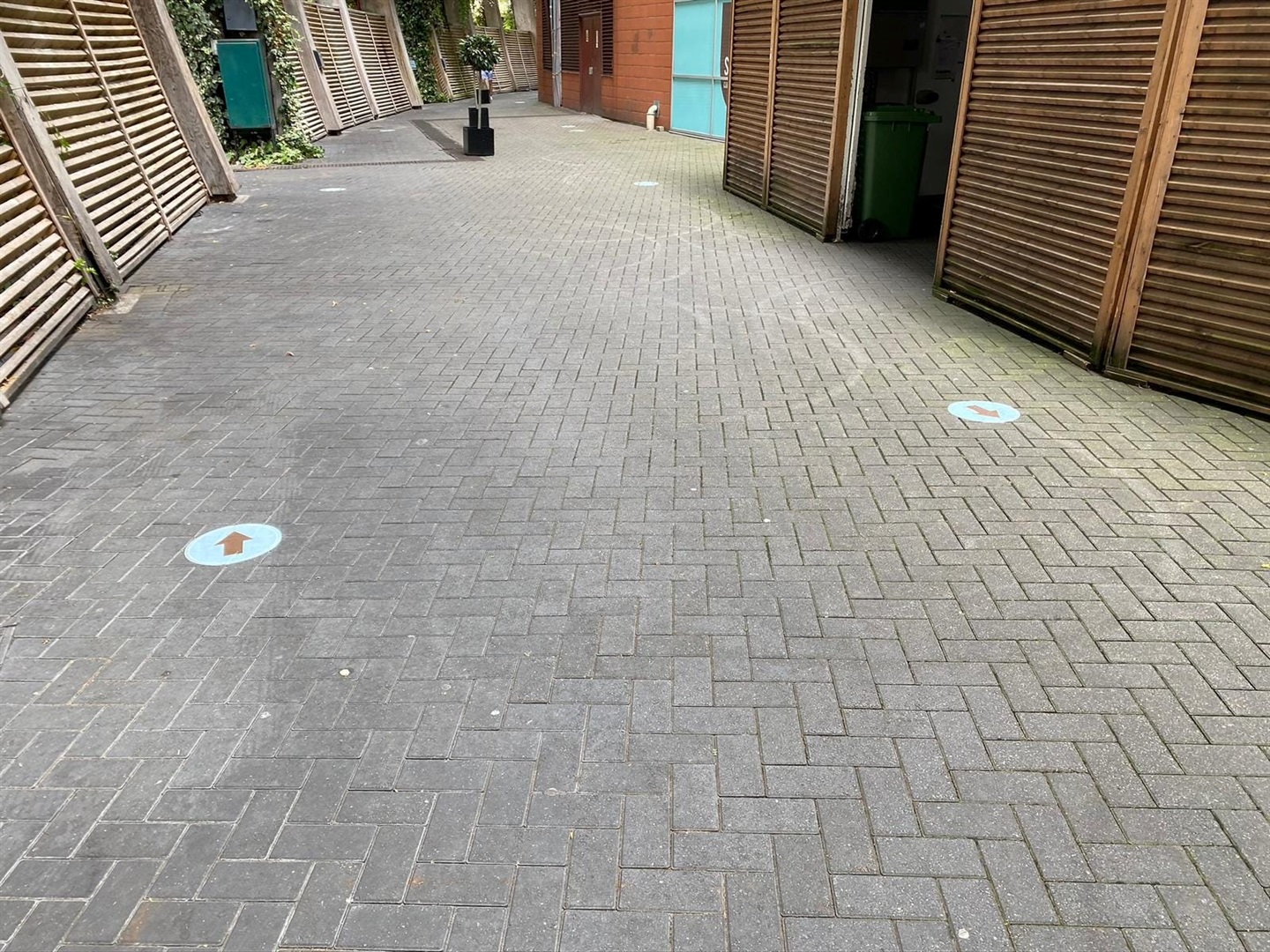 On the concourses behind the stands, a wide variety of bars and food stalls were open, with clearly labeled queuing systems, friendly, attentive staff, and contactless payments. Pie anyone? The Oval actually had a head-start on this. The ground has been completely cashless since last summer, so it didn't even need to make any changes to be coronavirus-era appropriate when it comes to payments.

One small difference I noticed with regards to food and drink was that the ground was using compostable single-use plastic cups. Prior to the pandemic, the Oval provided reusable cups that cost fans a £1 (R21) deposit to try and reduce plastic waste. Obviously these cups are not exactly appropriate right now, so it seemed a sensible move.

Most of the stadium concourses are uncovered, so while masks are encouraged, they're not compulsory. However, in covered parts of the ground, signs politely reminded fans to cover their faces. 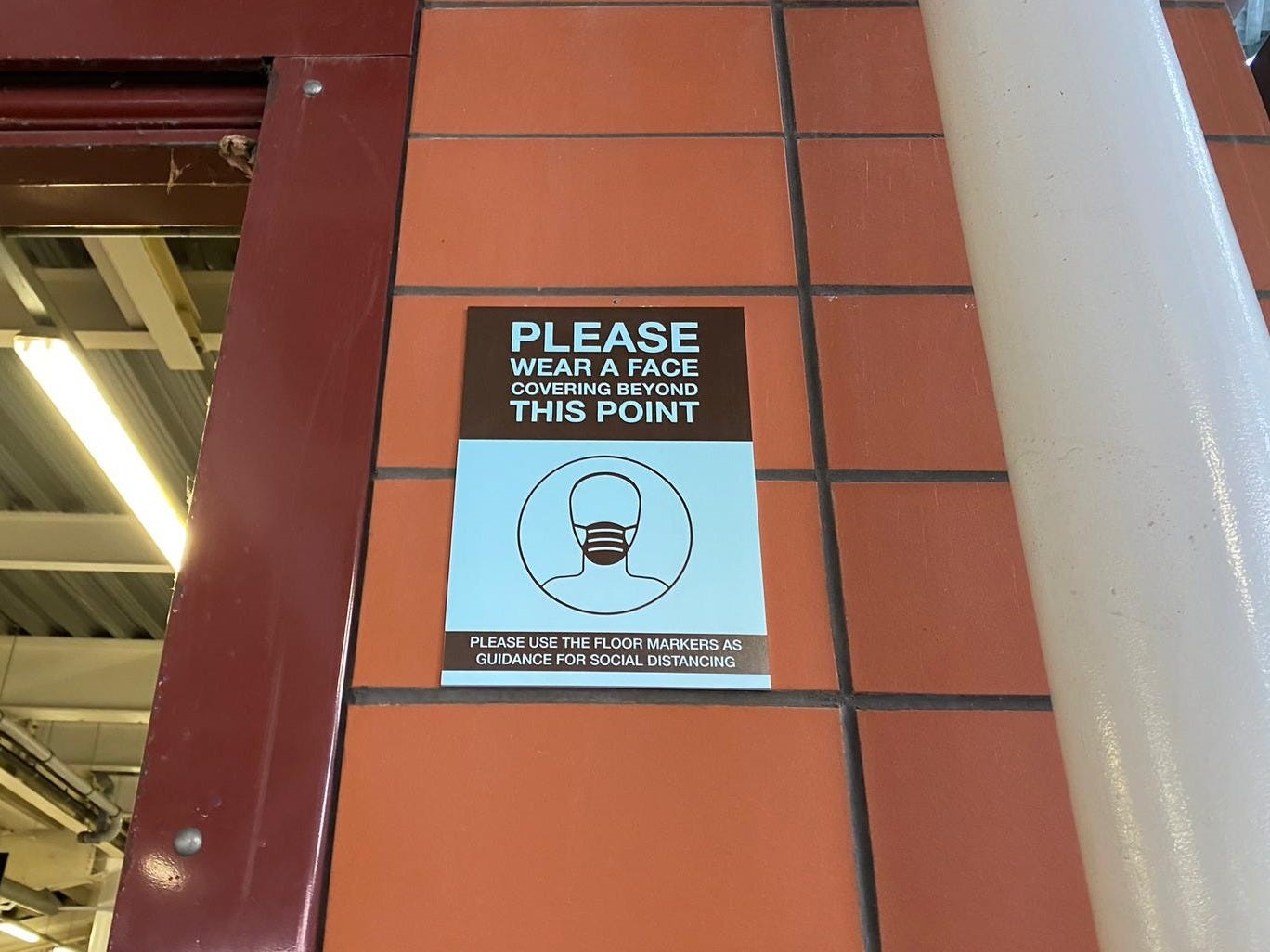 As I queued for a beer, a friendly volunteer asked me if I could answer some questions about my experience getting to the ground, how I was enjoying the game, and what I thought of the safety measures in place. Clearly fan feedback is crucial for the trials. 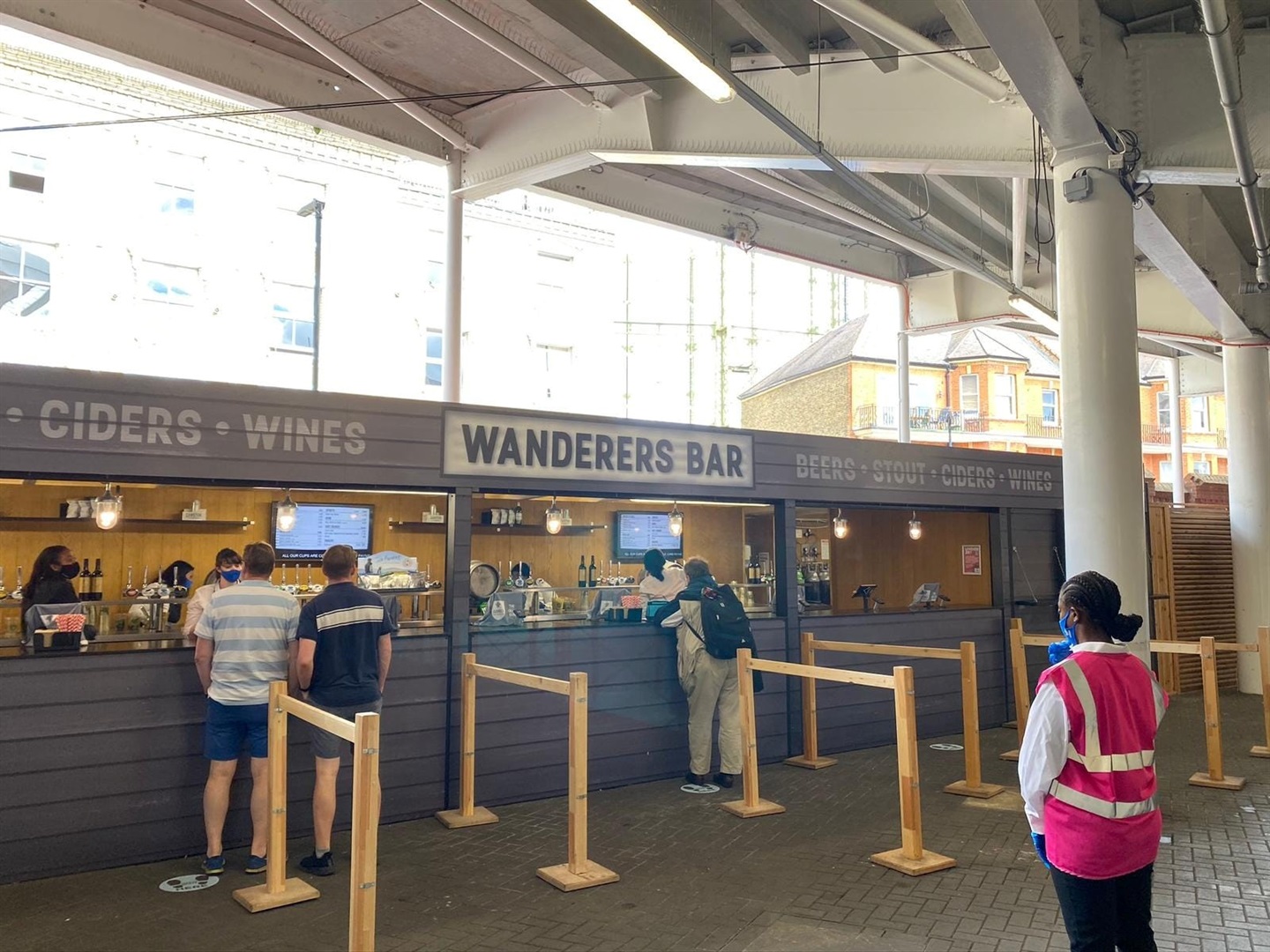 Beer purchased, it was time to watch some thrilling action. I entered the stadium bowl and was guided to my seat by two friendly stewards. 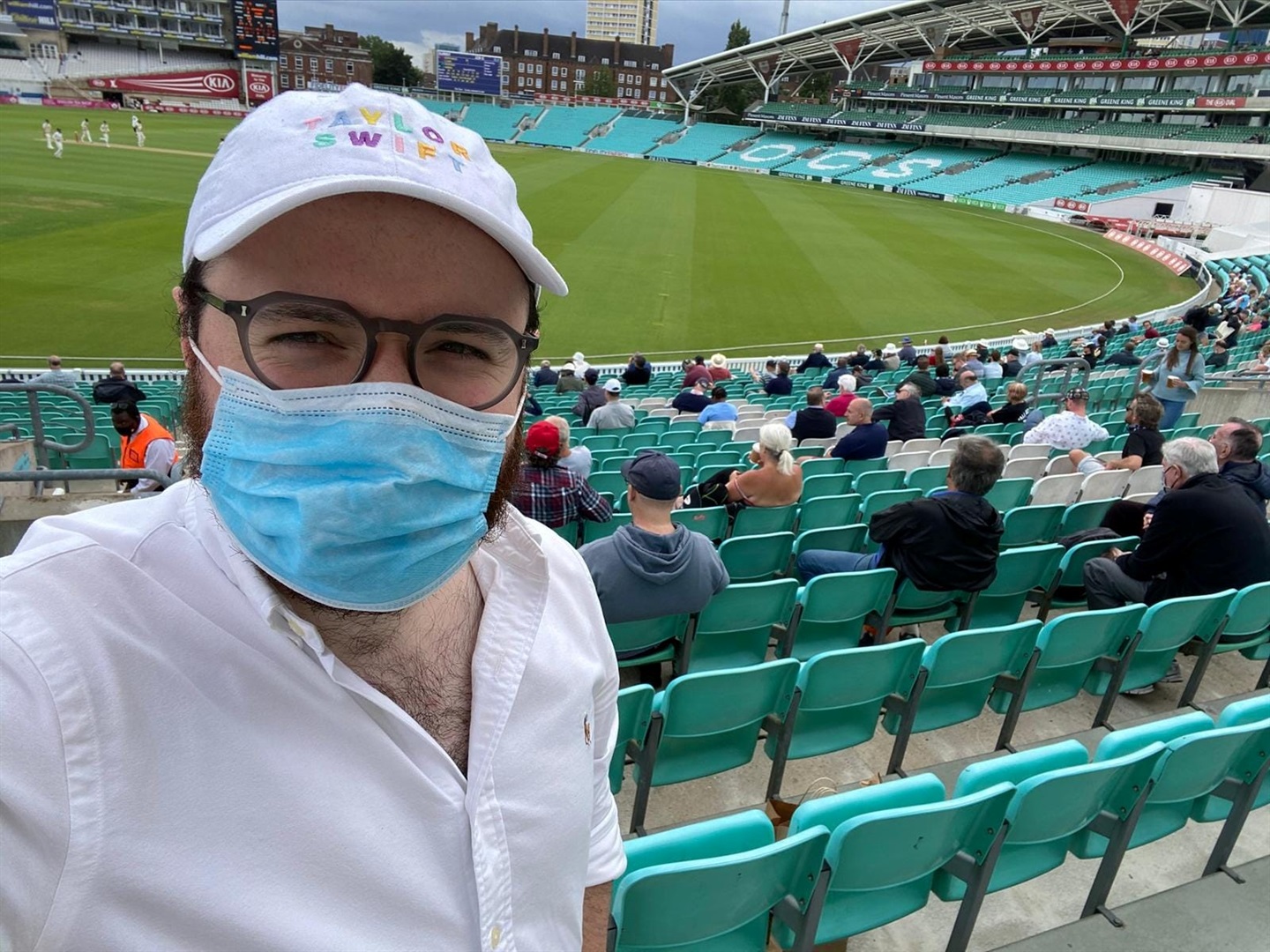 I was actually a little taken aback by how friendly everyone in the stadium was.

In my experience, the staff at the Oval have the tendency to be a bit rude - probably because they're normally dealing with about 20 times as many fans - but at this game, it was all smiles and friendly chit-chat.

As I mentioned before, the Oval seats 23,000 people when full across five separate stands. For this trial game, only a small portion of one of the stands was open to spectators. 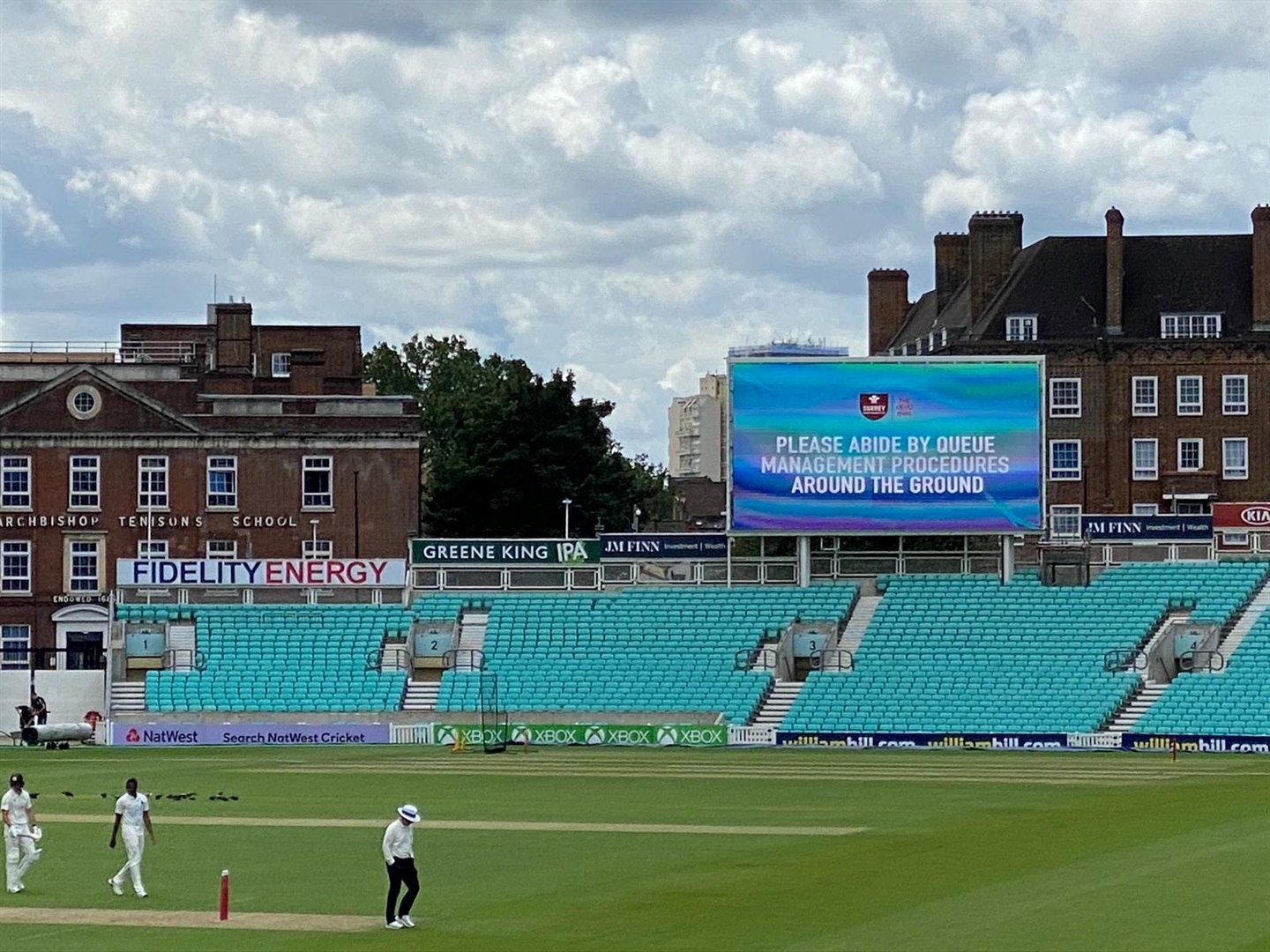 Everyone had their own allocated seat, which was unusual for this kind of match.

Domestic red ball cricket - which usually takes place over four days - isn't exactly the most popular spectator sport, and normally you can just show up and sit literally anywhere you'd like in the stadium. It's not unusual for crowds to be in low hundreds.

One concern many have expressed about returning to stadiums with smaller crowds than usual is that the atmosphere might be lacking. This didn't seem to be a problem at the Surrey v Middlesex game, largely because there were probably more fans in the ground than there normally would be for such a match!

I'd normally sit in the Pavilion — an area of the stadium reserved just for members — but for the friendly, I was sat in the 1845 Stand, the largest and usually the loudest in the stadium. The social distancing measures in place in the stands were impressive — in theory at least. Alternate rows were in use, and there were meant to be at least two empty seats between each fan. 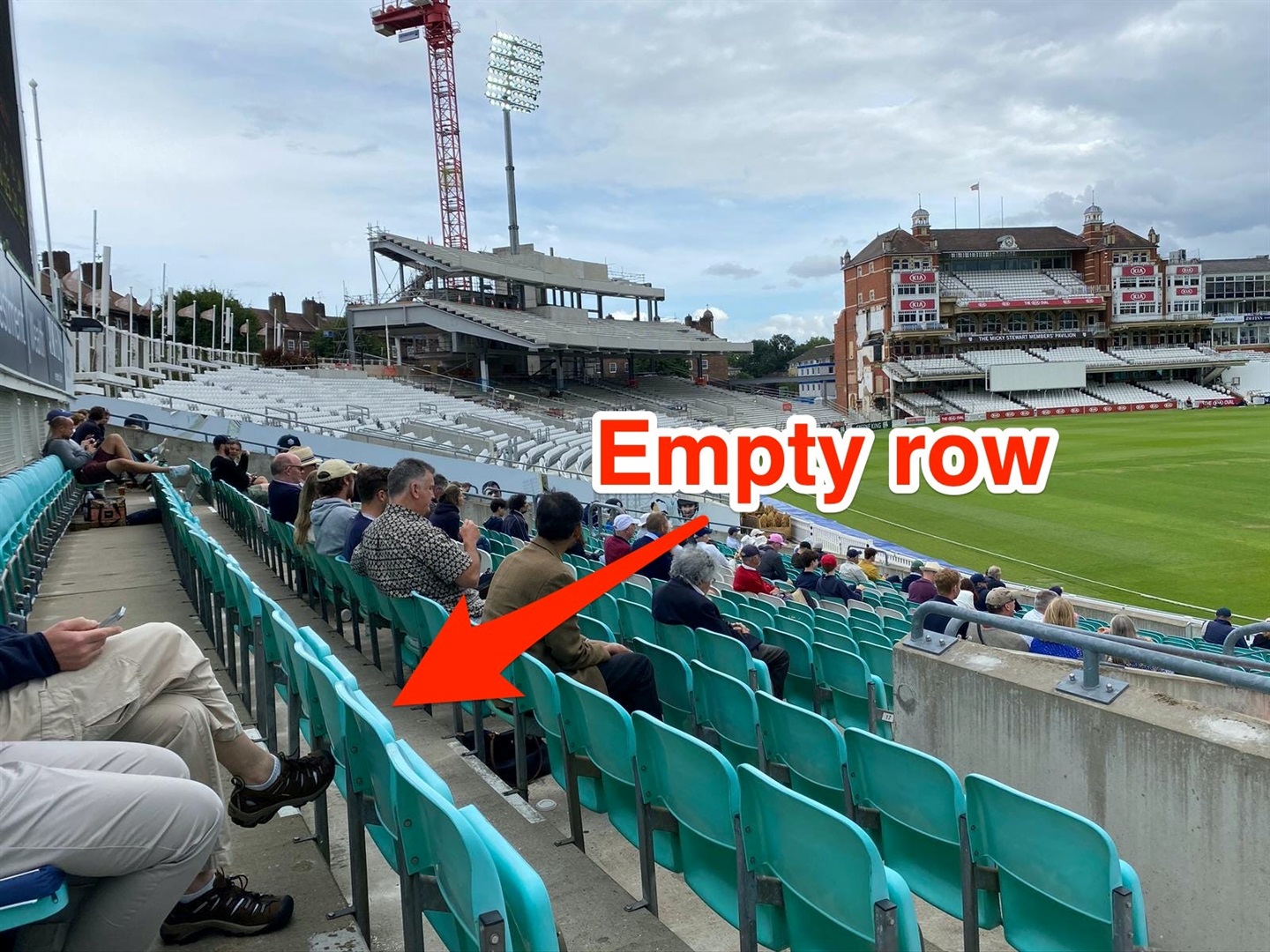 Groups of up to six were allowed to sit together, so long as they booked seats together in advance of the game. There were plenty of groups and couples around me, though I attended the game on my own.

When I arrived, however, there was only one empty seat between my allocated seat and the group next to me. Luckily, the seat along from mine was also empty, so I just sat there instead. One thing that shocked me in the ground was how few people were wearing masks. Sure it's an outdoor venue, but there were 1,000 of us crammed into a single stand. I kept mine on the whole time just to be safe. Watching the game itself was pretty much as normal. Red ball cricket isn't exactly frenetic at the best of times, but in a non-competitive match, it felt very languid indeed. I passed the afternoon drifting in and out of watching the game itself, sometimes checking the scores in the Premier League football going on, and other times reading my book, with half an eye on the cricket.

Honestly, the game wasn't that important to me, it just felt extremely good to be back at a place where I spend, on average, about three weeks every summer.

When nature called, going to the bathroom was pretty much like going to any public toilet is nowadays. There was a maximum of two people in each toilet block at a time, and a separate exit and entry point.

I didn't actually visit during the day, so I can't say what things were like inside.

Many of the toilet blocks were closed to fans, presumably to limit the amount of cleaning required.

Sadly, the action was cut short by a rainstorm at around 5 p.m, so I departed the ground. Leaving was actually the first time on the day I felt even vaguely unsafe.

Fueled by pints of discounted beer and delicious carb-heavy treats, a few of the fans in the ground were less than perfect about following social distancing guidelines and the one-way system.

All in all, however, the experience of watching live professional sport once again was a good one. Everything was well laid-out, clearly signposted, and the safety and comfort of fans was clearly the number one priority of event organisers.

Ultimately, the cricket itself wasn't really that important. What was more important was working out whether or not spectators can be safely brought back to sporting events in some way in the near future.

I'm not a scientist, so I can't comment on the epidemiological safety of Sunday's game, but on the evidence I saw, I'd be happy to return.