Coronavirus variants are partly to blame for surging cases in the US, according to Fauci 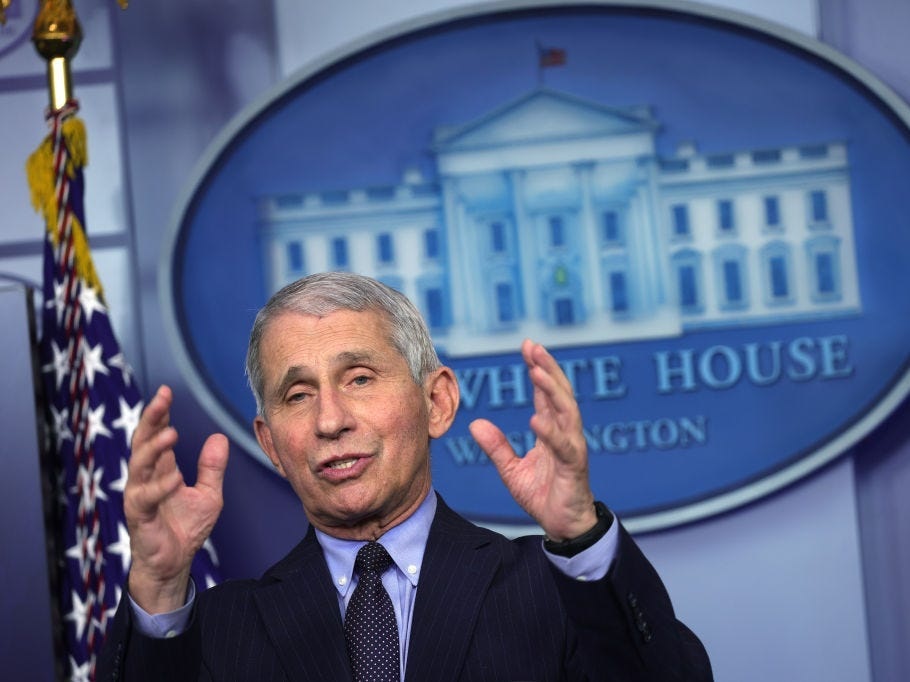 Dr. Anthony Fauci, the top US infectious-disease expert, said Sunday, March 28, that coronavirus variants were at least partly to blame.

These are called "variants of concern" by the Centers for Disease Control and Prevention (CDC), and there are four in the US.

B.1.1.7 was first detected in two people in south-east England. It was reported to the World Health Organisation (WHO) on December 14.

It has been identified in 107 countries worldwide, including the US, where there are more than 11,000 reported cases, according to the CDC. Oklahoma is the only US state where it hasn't been detected. Florida has the highest proportion of B.1.1.7 cases of any state, at just over 13%.

B.1.1.7 is between 30% to 50% better at spreading from person to person than other coronavirus variants, according to research from UK scientists that hasn't yet been published in a peer-reviewed journal.

B.1.1.7 could be more deadly. The UK government's New and Emerging Respiratory Virus Threats Advisory Group (NERVTAG) reported a model on January 21 that showed someone infected with B.1.1.7 is 30% to 40% more likely to die than someone with a different variant, but there is a lot of uncertainty around the numbers.

Covid-19 vaccines from Pfizer-BioNTech, Moderna, Johnson & Johnson and AstraZeneca all appear to protect against B.1.1.7.

B.1.351, first identified in South Africa

B.1.351 was first detected in Nelson Mandela Bay, South Africa, in samples dating back to the beginning of October 2020. It was reported to the WHO on December 18.

It has been found in 68 countries, including the US, where there are 312 cases reported across 31 states and jurisdictions according to the CDC

B.1.351 is thought to be 50% more contagious than the original strain, according to South African health officials.

It's not thought to be more deadly. But there is evidence from South Africa that when hospitals came under pressure because of the variant's spread, the risk of death increased.

The variant may evade the body's immune response, data suggests. Antibodies work best when they attach snugly to the virus and stop it from entering our cells. The B.1.351 variant has mutations called E484K and K417T at the site where antibodies latch on. In early lab tests, antibodies produced by Pfizer and Moderna's Covid-19 vaccines couldn't attach as well to B.1.351, compared to the original coronavirus.

We don't know yet whether this impacts the vaccines' effectiveness in real-life. Pfizer has published some data suggesting its vaccine may help protect people against this variant.

AstraZeneca's Covid-19 vaccine didn't prevent mild to moderate disease caused by B.1.351 in a trial, and we don't yet know if AstraZeneca's shot still protects against severe illness caused by the variant.

It is unlikely that vaccines will become completely useless against the variant. Existing vaccines could be updated and tailored to a new variant within weeks or months, or you may require a booster shot.

The variant found in Brazil was first detected in four people in Japan, who had travelled from Brazil on January 2. It was identified by the National Institute of Infectious Diseases on January 6, and reported to the WHO that weekend.

It has been found in 36 countries worldwide, including the US, where there have been 172 cases, according to the CDC

P.1 is probably more contagious - it was initially detected in Amazonas, north-west Brazil, on December 4, and by January 21, 91% of people with Covid-19 in the region were infected with P.1, according to the WHO.

Covid-19 vaccines from Pfizer and AstraZeneca work against P.1. Moderna's hasn't been tested. Johnson & Johnson's Covid-19 vaccine was 68% effective in trials in Brazil, where the variant is the most common strain, compared with its 72% efficacy in the US, where P.1 accounts for 0.1% of sequenced coronavirus tests.

The variant first found in California consists of two slightly different mutated forms of the virus, called B.1.427 and B.1.429. It is also called CAL.20C, using another naming system. It was first found in California in July and has now been detected across the US and elsewhere, including in Australia, Denmark, Mexico, and Taiwan, according to the Global Initiative on Sharing Avian Influenza Data (GISAID).

B.1.426/B1.429 are estimated to be 20% more infectious than the original coronavirus - they have become the most common coronavirus variants in California, accounting for more than 57% of sequenced cases, according to the CDC. This is likely because of a mutation called L452R mutation, which in early lab studies was shown to help the virus infect cells.

Covid-19 vaccines haven't yet been tested against this variant specifically. But early lab studies showed that antibodies produced by previous Covid-19 infections worked only half as well against the variant as they did with the original coronavirus strain. So-called "variants of interest" have potentially worrisome mutations, but how they affect the virus' behaviour is not yet known.

These two variants were detected in New York in late 2020. They are "variants of interest" because they have mutations that could evade antibody responses. B.1.525 accounts for 0.2% of sequenced coronavirus tests in the US, according to the CDC.

P.2 was first detected in Brazil in April 2020. It's a "variant of interest" because it has mutations that could mean it evades antibody responses. Less than 1% of sequenced coronavirus tests in the US are P.2, according to the CDC.

The WHO has said that everyone should double down on precautions that stop the spread of variants, such as social distancing, hand-washing, mask wearing, and avoiding crowds.

"Human behaviour has a very large effect on transmission - probably much larger than any biological differences in SARS-CoV-2 variants," Paul Bieniasz, a virologist at the Howard Hughes Medical Institute, told Insider.