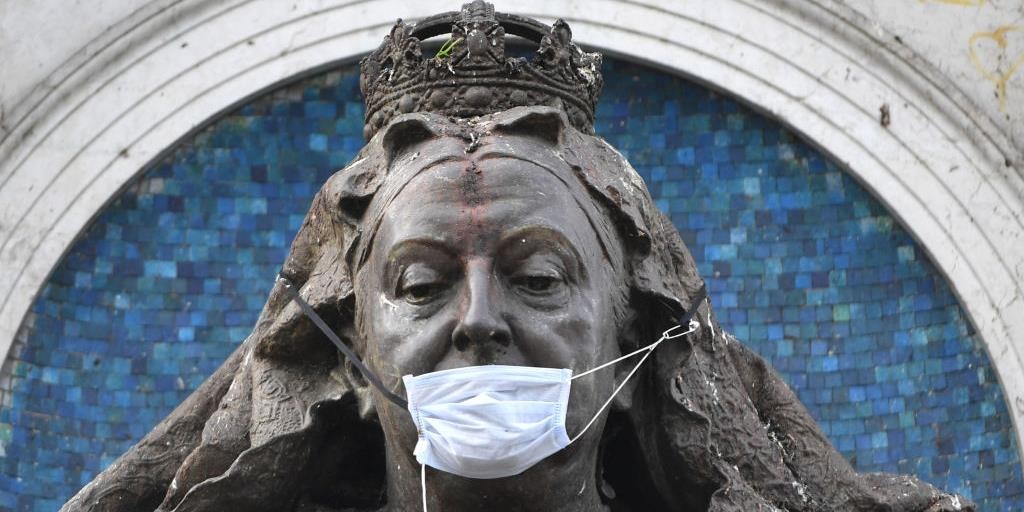 A statue of Queen Victoria is seen wearing a face mask on March 19, 2020 in Manchester, United Kingdom.
Getty

The UK's coronavirus lockdown measures could be extended in some form until as late as September with some measures lasting even beyond that, one of the government's medical advisers has indicated.

Dr Jenny Harries, the UK's deputy chief medical officer, said on Sunday that the strict new rules would be reviewed every three weeks for as long as six months, and possibly beyond.

"If we are successful we will have squashed the top of that curve which is brilliant, but we must not then suddenly revert to our normal way of living," she said at Downing Street's daily press conference on Sunday.

"That would be quite dangerous. If we stopped then, all of our efforts will be wasted and we could potentially see a second peak. Over time, probably over the next six months, we will have a three-week review, we will see where we're going, we need to keep that lid on, and then gradually we will be able to hopefully adjust some of the social distancing measures and gradually get us all back to normal.

"I think three weeks for review, two or three months to see whether we've really squashed it, but about three to six months ideally ... to see at which point we can get back to normal. And it is plausible it could go further than that."

But she added: "This is not to say we would be in complete lockdown for six months."

Deputy CMO Dr Jenny Harries says it could be six months or longer before the UK returns to normal from the #coronavirus pandemic, with reviews of lockdown measures to take place every three weeks.#COVID19 latest: https://t.co/ec7oWr9nUD pic.twitter.com/Bper7lVcMv— Sky News (@SkyNews) March 29, 2020

The number of confirmed cases in the UK rose to 19,522 on Sunday, with 1,228 people having died after testing positive for the virus, but the UK's chief science advisor Patrick Vallance has said the true figure could be significantly higher. Boris Johnson, the health secretary Matt Hancock, the chief medical officer Chris Whitty, and Johnson's chief adviser Dominic Cummings are all self-isolating after testing positive or showing symptoms of the coronavirus. In a message filmed from his flat above 11 Downing Street, where he is self-isolating, the prime minister yesterday praised the 20,000 former NHS staff who have returned to work during the outbreak, and said: "We are going to do it, we are going to do it together. One thing I think the coronavirus crisis has already proved is that there really is such a thing as society."

Thanks to everyone who has been staying at home.

By delaying the spread of the disease we can reduce the pressure on our NHS, and that's how we hope to save many thousands of lives.#StayHomeSaveLives pic.twitter.com/kxdqItMYSE — Boris Johnson #StayHomeSaveLives (@BorisJohnson) March 29, 2020

In a letter being sent to every UK household, however, the prime minister warned that things would get worse before they get better.

"From the start, we have sought to put in the right measures at the right time," Johnson wrote.

"We will not hesitate to go further if that is what the scientific and medical advice tells us we must do."

"It's important for me to level with you - we know things will get worse before they get better." Harries confirmed that the government expects the daily death toll to increase "for the next week or two" before slowing.