A full lockdown of the UK in which the public will be barred from gathering in public spaces is now "inevitable" according to one senior government source quoted by the Times of London newspaper on Monday.

"The prime minister will have the full support of the cabinet and the country at large if he goes ahead with this," the source said.

"It is inevitable, you just have to look at other countries. The sooner you do it the better."

According to the BBC, possible new measures to be announced include plans to close all non-essential shops and greater clampdowns on people not fulfilling existing guidelines.

Govt considering next steps like closing non-essential retail or whether to start treating people flouting the stay at home advice as acting against the law - all being discussed - huge decisions, nothing final— Laura Kuenssberg (@bbclaurak) March 23, 2020

That a UK lockdown is coming seemed obvious to anybody watching Boris Johnson's press conference on Sunday.

Over the weekend images of the public flocking in record numbers to national parks, markets and open spaces, filled social media.

The latest travel data also suggests that London is lagging behind all other European cities in terms of shutting down its movement.

Photo taken just now by my colleague @JJ_Bryant (who was not there as a punter). pic.twitter.com/ffplOIgewX — Dino Sofos (@dinosofos) March 22, 2020

Weâ€™re tracking real-time data to get an indication of how and when countries are locking down, and which Asian countries are getting back up and running.

Asked about the failure of Brits to take the crisis as seriously as elsewhere in Europe, Johnson said that he would have to act soon unless the public changed their behaviour.

"I say as firmly and strongly as I can to everybody that going outside now, taking exercise, enjoying yourself - you've got to observe social distancing," he said at a press conference inside Downing Street.

Asked what those measures would be, he replied that curfews would be implemented in line with other European countries.

"I don't think you need to use your imagination very much to see where we might have to go, and we will think about this very, very actively in the next 24 hours," he said.

Is it all too late for the UK? 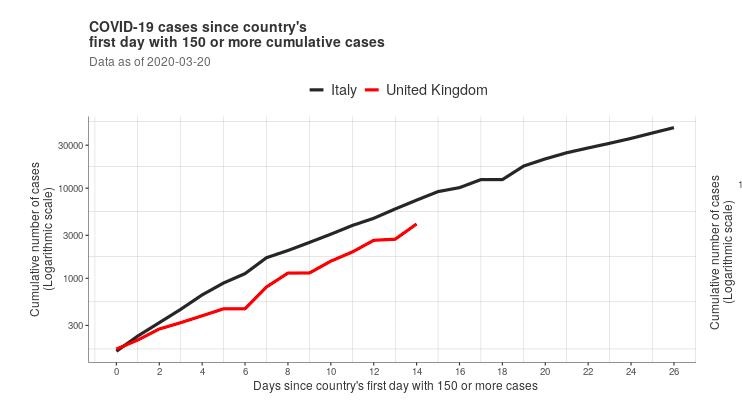 The latest data shows that the UK is roughly two weeks behind Italy in terms of its coronavirus death toll, with the rate of increase slightly ahead of where Italy was at this stage.

Of course, at this stage in their outbreak, Italy and many other nations, were already implementing the sort of draconian lockdowns which the UK prime minister appears so reluctant to do.

Without such a lockdown the UK looks likely to soon meet, if not exceed, the level of crisis currently being seen in Italy, with all of the dire social costs that would entail.

The UK government's slow response has taken heavy criticism in recent days with the normally supportive Times newspaper leading with an editorial castigating the prime minister on Monday and comparing his slow response to Neville Chamberlain's appeasement of Nazi Germany.

Buzzfeed News also reports that failure to act soon will lead to a "full scale mutiny" by Johnson's own Cabinet against him.

With such pressure building for a tougher response from the government, a lockdown of at least parts of the UK within days or weeks, now looks all but certain.