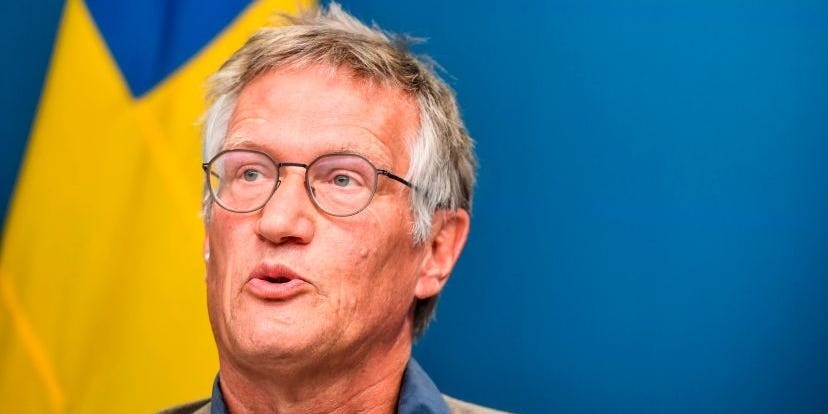 State epidemiologist Anders Tegnell of the Public Health Agency of Sweden speaks during a news conference on July 30, 2020 in Stockholm.
Getty

Sweden has recorded its highest death toll in any six-month period in the past 150 years, after refusing to implement a full coronavirus lockdown.

Sweden recorded 51,405 deaths in the period between January and June, according to Statistics Office figures reported by Reuters.

This was its highest death toll since 1869 when the country was dealing with a famine that started two years earlier. 55,431 Swedes died in that year.

Sweden's coronavirus response has attracted global attention as unlike in most countries, its government did not implement strict lockdown measures in response to the outbreak of the Covid-19 virus. Instead, it allowed shops, bars, and restaurants to remain largely open and students to attend school.

Sweden's state epidemiologist Anders Tegnell, who is widely credited as the architect of the country's response to the pandemic, justified Sweden's response by saying countries that imposed strict lockdowns would most likely suffer large second waves later in the year, whereas Sweden's would be smaller.

Tegnell suggested that by opting against a strict lockdown, Sweden would be able to achieve herd immunity — the contentious theory that a population will become immune to the coronavirus when at least 60% of people catch it.

In April, he predicted that by May 40% of people in Sweden's capital Stockholm would have developed coronavirus antibodies which could potentially contribute towards Covid-19 immunity — though there is currently insufficient evidence that antibodies provide long-term immunity to the virus. A recent study carried out by University College London estimated that a significantly smaller percentage of people in Stockholm — 17% — had developed antibodies by around this time.

5,802 people in Sweden had died after catching the coronavirus as of Thursday morning.

This is significantly higher compared to Sweden's Nordic neighbours. Norway's death toll was 262 as of Thursday, while in Finland it was 334. It is also one of the world's worst-affected countries in terms of deaths per population.

Related Links
Sweden's GDP slumped 9% in Q2, more sharply than its neighbours despite its no-lockdown policy
New study finds Stockholm has same infection rate as London, casting more doubt on herd immunity...
Sweden's Covid-19 policy looks like a disaster — but the country is determined to see it through
Next on Business Insider
Cristiano Ronaldo has been eating alone at Manchester United, report says - manager may let him leave