South Korean researchers who ran this latest study say hand washing, mask wearing, and physical distance at all times can mitigate the risk of transmission.
Valery Sharifulin\TASS via Getty Images

A new study published by the Centers for Disease Control and Prevention (CDC) found evidence that asymptomatic carriers can transmit the novel coronavirus to others on airplanes,

The study, published in the peer-reviewed CDC journal Emerging Infections Diseases, was conducted by researchers in Korea led by Dr. Sung Hwan Bae, and was based on an evacuation flight from Milan to Seoul in late-March.

Before boarding, medical staff examined the 310 people scheduled to fly; 11 people who showed symptoms did not board the plane. Every passenger was given an N95 mask, and staff followed strict infection control procedures at the airport and in the air, overseen by the Korea Centers for Disease Control and Prevention. When the flight landed, the 299 passengers were quarantined by the government for two weeks and regularly tested for Covid-19. 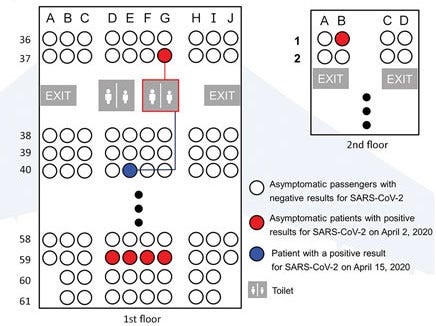 The study found that one passenger on board was likely infected by six asymptomatic carriers who were also on the flight.
CDC

Eighteen crew members and Korea CDC staff were also quarantined. All tested negative throughout the study.

Because of the strict infection control and post-flight quarantine, the researchers concluded that the newly infected patient had likely caught the virus during the trip. A validation study looking at a second flight found the same outcome, with three asymptomatic patients likely infecting one other passenger.

What's less clear is how, exactly, the virus was transmitted. High-efficiency particulate-arresting filters on aircraft, which remove microbes from recirculating air on board planes, make airborne transmission difficult between seated passengers, the researchers said. That likely contributed to the fact that only one passenger became infected; having every passenger wear an N95 respirator presumably also helped.

That makes it likely that transmission resulting from touching a contaminated surface, or during boarding, disembarkation, or while walking in the aisles.

Airlines have developed a variety of methods to mitigate the risk of Covid-19 transmission on flights, as they try to instill public confidence and encourage people to return to flying.

Every major US airline requires passengers to wear masks while aboard. Some, including Delta, are blocking middle seats in order to facilitate social distancing. All have implemented new cleaning and disinfection regimens.

However, the study suggests that there's room for improvement, especially as asymptomatic passengers can contaminate surfaces during flights, or may not cooperate with mask requirements.

The researchers offered three suggestions to mitigate risk: "First, masks should be worn during the flight. Second, because contact with contaminated surfaces increases the risk for transmission of SARS-CoV-2 among passengers, hand hygiene is necessary to prevent infections. Third, physical distance should be maintained before boarding and after disembarking from the aircraft."