British health authorities have completed work on a makeshift coronavirus hospital in east London, which had been built from scratch in just nine days.

NHS Nightingale, which is located inside the ExCeL conference centre, will admit admitting its first patients this week. The center is normally used for large trade fairs and conventions.

Authorities are currently fitting out the hospital with beds. The hospital will eventually have 4 000 beds and two temporary morgues, and be the largest hospital in the UK.

Some 200 British Army soldiers tirelessly worked alongside National Health Service (NHS) staff and civilian contractors every day to convert the center into a field hospital, The Guardian reported.

Scroll down to see what NHS Nightingale looks like.

As the UK braces for more coronavirus cases, the ExCeL conference centre in London has been converted into a makeshift field hospital in just nine days. The centre is located in between Canary Wharf, a key financial district in London, and London City Airport.

The facility, which normally houses large conventions and trade fairs, will be used to treat Covid-19 patients transferred from other intensive care units across the capital city. The facility — named NHS Nightingale — will be divided into two, 2 000-bed wards, becoming the largest hospital in the UK, Health Secretary Matt Hancock announced on March 31.

That means, at its maximum capacity, the hospital will be able to hold a total of 4 000 patients.

Some 200 military personnel have worked alongside NHS staff and civilian contractors — including electricians, plumbers, and carpenters — to construct the hospital in record time. This video, taken by one of the builders on March 25, shows NHS Nightingale under construction:

The aim was to complete the first phase of the building before other hospitals in London run out of room to treat their patients, many of which need ventilators, The Guardian reported.

The fast pace of construction mirrors that in Wuhan, China - the epicenter of the outbreak - where authorities built two hospitals for the city's coronavirus patients.

The entire hospital takes up a total of 88 000 square metres inside the center. Photos taken inside show row upon row of beds in cubicles built in the space. 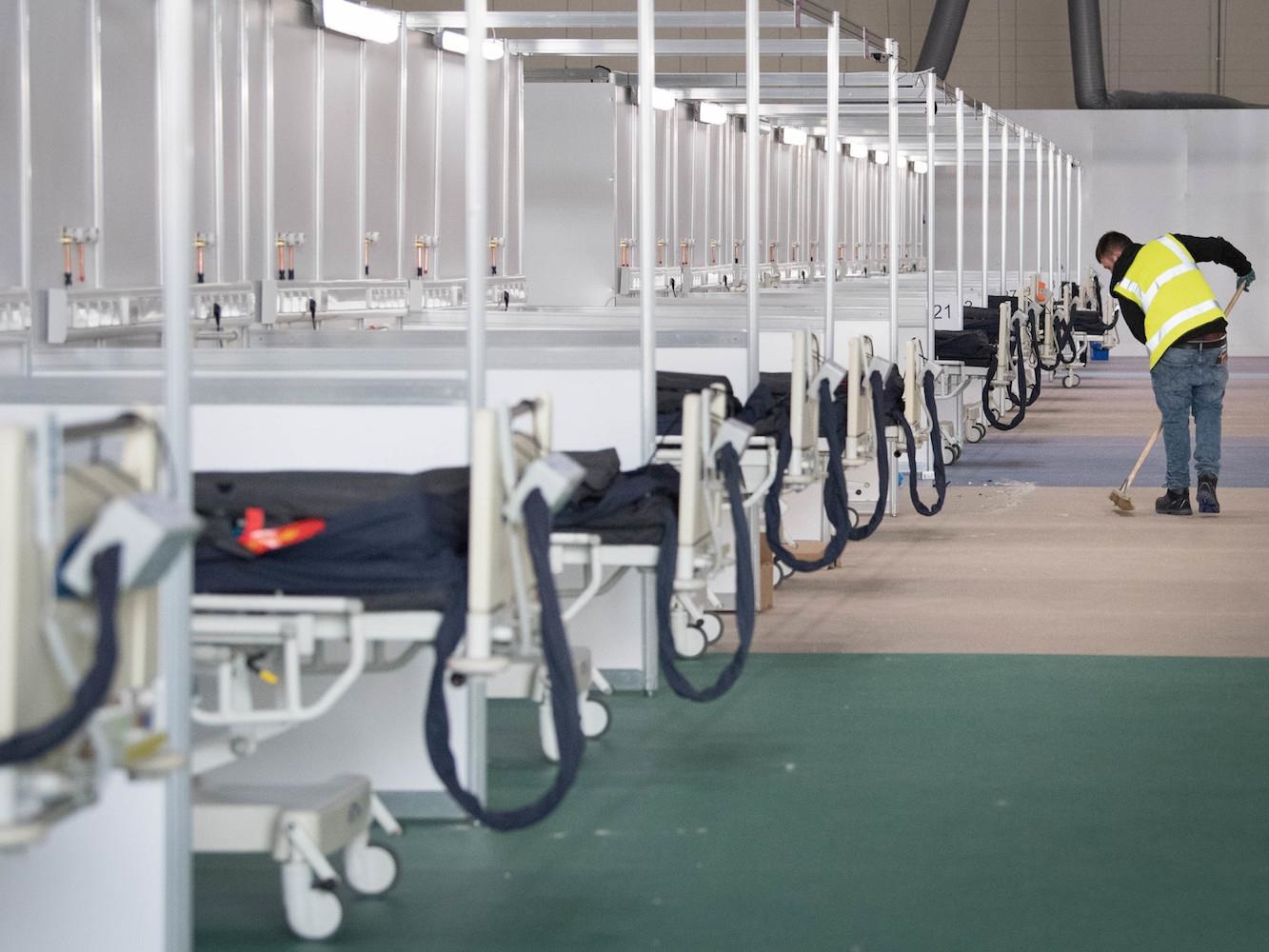 This is one wing of the NHS Nightingale hospital, called Florence South, where coronavirus patients will be treated. The name of the hospital appears to be a homage to Florence Nightingale, the British nurse and statistician who served wounded soldiers in the Crimean War. 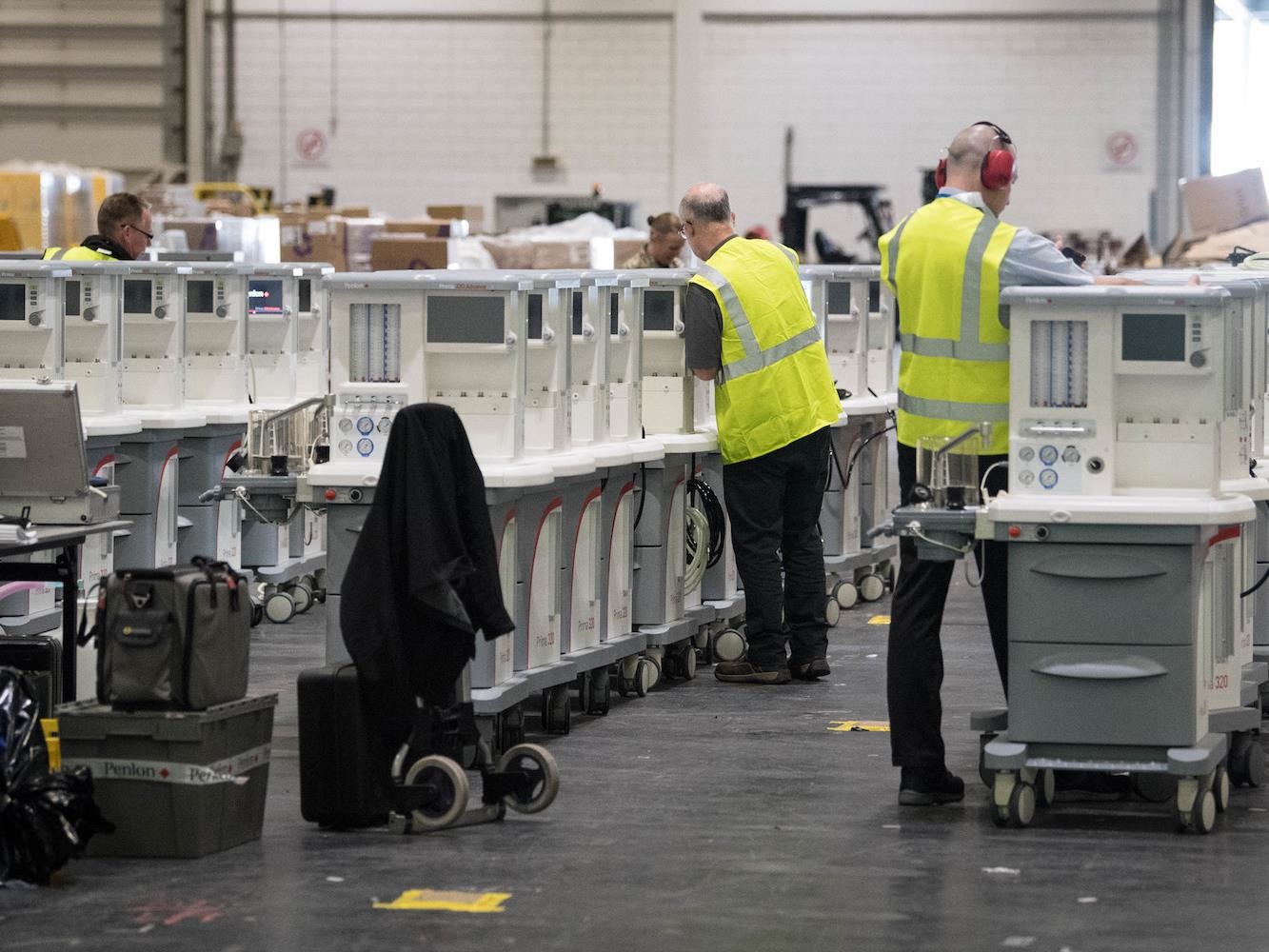 Here's what a patient's bed paired with a respirator looks like in the hospital. Medical staff are also building two morgues at the hospital, where patients who have died from the coronavirus will be kept temporarily. The morgue is not pictured. Other important equipment, like face masks for health workers, have also been brought into the facility. UK medics warned in early March that hospitals are beginning to run out of the critical equipment needed to protect them from the virus.

NHS CEO Simon Stevens told the BBC that the quick construction of the hospital was an "extraordinary team effort." Colonel Ashleigh Boreham, the military team leader and an expert on building hospitals in crisis zones, also said the construction of NHS Nightingale was the largest he had undertaken in his army career of 27 years.

"We literally got a phone call, arrived here, met up with the NHS about nine days ago, sat around a table and basically did what you always do," Boreham told The Guardian.

"We draw a plan up, over a brew, and then from that, you start to build up a plan and create the product. It's the biggest job I've ever done."

The UK has put in a huge effort to fight the coronavirus. Nearly 12 000 retired health professionals returned to work to help the NHS, Hancock said on March 30. Meanwhile, over half a million Britons have volunteered to help the NHS support the 1.5 million citizens identified to be vulnerable to the virus. The NHS has not announced when exactly NHS Nightingale will start operating. It has confirmed, however, that it will start taking up to 500 patients at the end of the week. Once in operation, the hospital will be staffed by NHS specialists and hundreds of volunteers from the St. John Ambulance Service, a first-aid non-profit. Cabin crew from EasyJet and Virgin Atlantic, who are otherwise out of work due to flight cancellations, will also join after rigorous training. The hospital will be managed by both NHS staff and members of the British military. The UK is bracing itself for the number of Covid-19 cases to grow rapidly in the coming weeks. As of April 1, the country has recorded more than 29 000 coronavirus cases and more than 2 300 deaths.

With more than 70 confirmed cases per 100 000 people, London is the worst-affected city in the UK, according to the BBC.

At least two more temporary hospitals are being planned: One at the NEC center in Birmingham, which will house 5 000 beds, and another at the Convention Complex in Manchester, with 1 000 beds.