The G-20's "least-resilient" nations are set to face far worse economic consequences than wealthier ones in the aftermath of the pandemic, according to a report by global political risk consultancy Verisk Maplecroft.

India, South Africa, and Brazil will experience the "harshest repercussions" as they attempt to recuperate economic losses this year, analysts David Wille and Joshua Cartwright wrote.

G-20 countries in Western Europe and East Asia have the capacity to recover more rapidly than emerging market members, the report said.

More affluent countries adopted strict lockdowns and managed to support citizens when their economies entered a "self-induced coma," the report found, while poorer G-20 members could not launch such widespread programmes, it added.

The clear outlier was found to be the US with the "least effective pandemic response of any developed market" due to a politicised re-opening of state level eceonomies, which allowed the virus to keep spreading, the report said.

However, it added, as soon as a vaccine is developed, the high fiscal power of the US will lessen the impact of the downturn.

The G-20, which is made up of the EU and 19 of the world's most powerful economies, can expect its members to see a two-track recovery through Verisk Maplecroft's "Recovery Capacity Index."

The index measures a nation's ability to recover from a crisis. 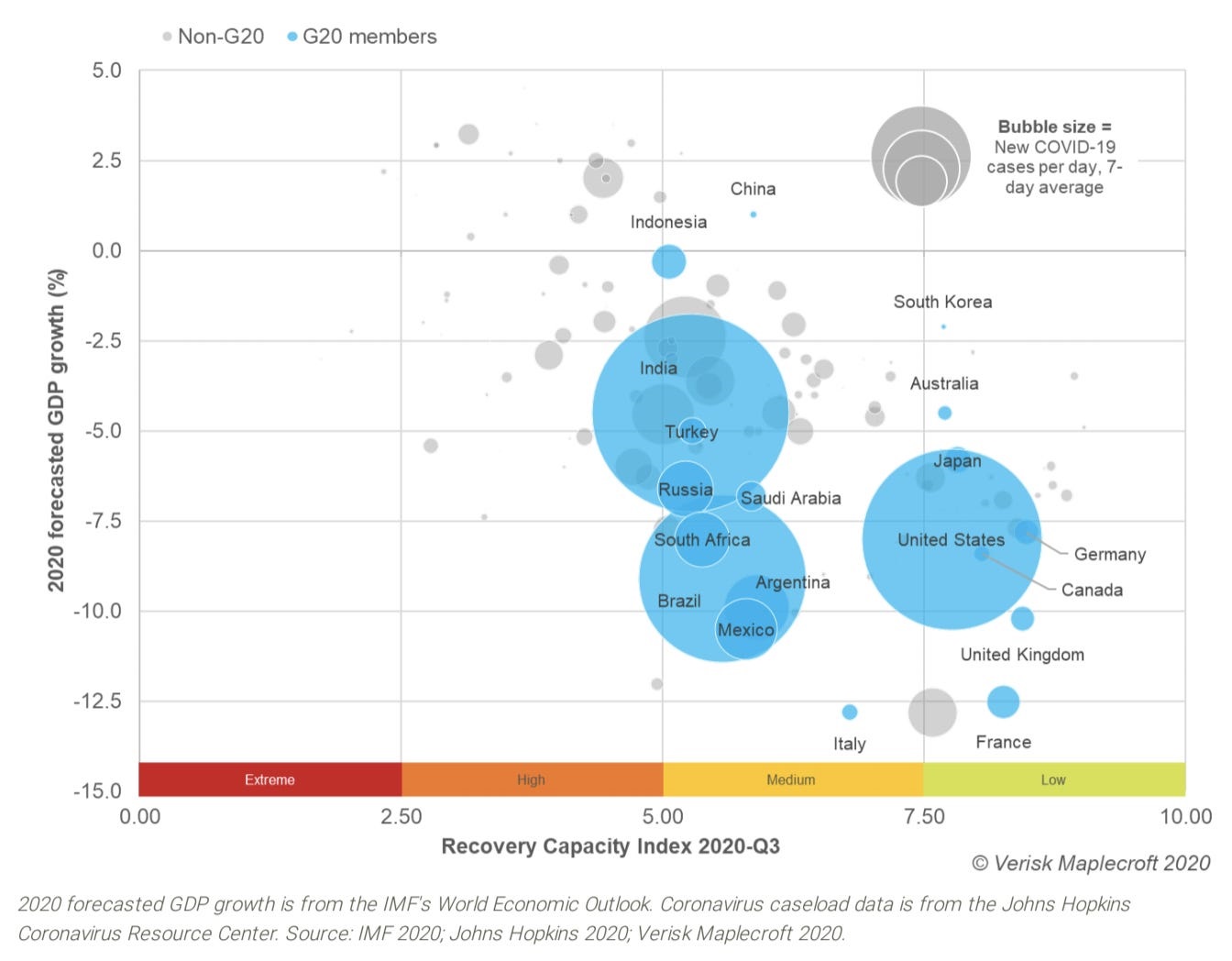 India, South Africa, and Brazil lie at the very bottom of this index.

In its latest world economic outlook, the International Monetary Fund predicted that emerging market economies will shrink by 3.2% in 2020 — the largest decline for this group on record.

"A drawn-out recovery for these markets will have severe repercussions for the investment community, consumer markets and multinationals," Verisk Maplecroft's report said.

Smaller G20 members will see their recoveries hampered by weak institutions and corrupt governance, it highlighted. Disruptions from civil unrest pose the biggest roadblock to their recovery, the report added.

Maplecroft's measure for corruption scores India, Brazil, and South Africa as high-risk while Russia, Mexico, and Indonesia fall under the "extreme" risk category.

"Corrupt, ineffective and unstable governments will be limited in their ability to direct funding to where it is most needed, failing to revive the economy even after the immediate crisis is dealt with," the report noted.

The urban population density of such nations is another weak-point as that indicates high exposure to the virus, and difficulty in containing outbreaks.

The consultancy found that India and Indonesia fall under an alarming high-risk category when it comes to connectivity — a measure of the physical distance between populations and the availability of digital infrastructure that indicates the speed of worker and consumer activity.

On that gauge, South, Africa, China, Mexico, and Brazil are comparatively better off at a medium-risk level.

"Even if they manage to avoid the worst, our Recovery Capacity Index suggests that India, South Africa and Brazil still have a long road ahead," the analysts concluded.