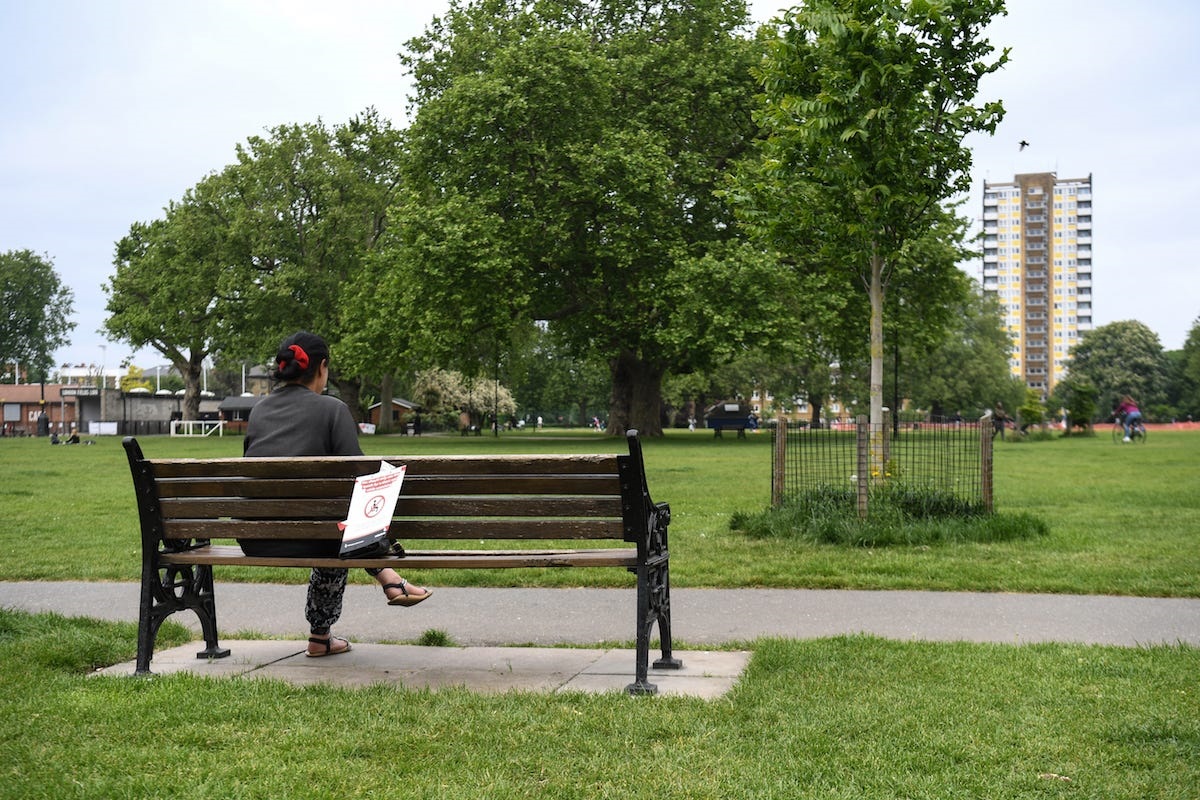 A woman sits on a park bench in London, England.
Kirsty O'Connor/PA Images via Getty Images)

An environmental silver lining is emerging amid the coronavirus pandemic: Many people have stopped flying and aren't driving to work, leading to a drastic drop in carbon emissions.

"We'll see global carbon emissions drop at least 4% this year and possibly 7% or 8%," Robert Jackson, a co-author of the new study and chair of the Global Carbon Project, predicted for 2020 as a whole. "Either way, it will be the biggest one-year drop since WWII, and possibly ever."

In order to quantify the drop in carbon emissions, the study authors examined emissions data from more than 69 countries, including the US, and 30 Chinese provinces. The sampling represents 85% of the world population and 97% of global CO2 emissions.

In early April, the researchers found, the regions responsible for 89% of global emissions were under some type of lockdown. So they split the lockdowns into three categories based on levels of severity, then estimated the impact on residents' normal daily activities (and the associated effects on carbon emissions).

They found that countries under the most severe stay-at-home orders, which they defined as "mandatory national lockdowns that require household confinement of all but key workers," experienced a 50% daily decrease in surface transport (like trips in cars) and a 75% daily decrease in air travel.

Those two sectors saw a 36% and 60% decrease in emissions, respectively.

The drop in emissions from surface transport accounted for 43% of the total decrease in daily global emissions compared to 2019. That's because air travel contributes to less than 3% of annual carbon emissions, while ground transport contributes nearly 10 times that.

In total, the researchers estimated that emissions between January and mid-April dropped by a total of 1,048 million metric tons compared to last year's 12-month average. About 23% of that drop came from China, 20% from the US, and 9% from India.

Emissions fell, on average, 26% in countries at the peaks of their lockdowns.

The 17% decrease in daily CO2 emissions is "extreme and probably unseen before," the study authors wrote.

Still, that drop only brings emissions in line with where they were in 2006, which highlights how much emissions have spiked in the last 14 years.

Before the pandemic, global carbon emissions had been rising by about 1% per year for the last decade, according to the new study.

But 2020 will buck that trend, regardless of when the world emerges from lockdown.

If pre-pandemic conditions return by mid-June - meaning non-essential businesses reopen and air and vehicle travel resumes at typical levels - annual global carbon emissions will still likely fall by 4%. If some lockdowns and travel restrictions persist through the end of the year, that drop could be even bigger: closer to 7%.

According to Jackson, that's the level of emissions reductions the world needs every year to meet the climate goals set in the Paris climate agreement, which aims to limit global warming to 1.5 degrees Celsius.

Corinne Le Quéré, the lead author of the new study, warned in a press release that "these extreme decreases are likely to be temporary though, as they do not reflect structural changes in the economic, transport, or energy systems."

She and her colleagues wrote that world leaders need to incorporate climate-change goals into their economic rebuilding efforts - by investing in clean energy, for example. A woman wearing a protective visor bikes through Paris, France, on May 13, 2020.
Samuel Boivin/NurPhoto/Getty Images

He added that lockdowns could change the way people think about getting around.

"People are reimagining transportation without the internal combustion engine," he said. "We could have blue skies every day without staying home by walking, biking, and driving clean electric vehicles."