Waste not: the smart business turning food destined for landfill into compost – right in your kitchen. Let’s be honest, no one likes to deal with trash. It’s stinky and attracts all sorts of unsavoury looking creatures. What’s worse, when you throw it away, little thought given to where it ends up.

But, where others see waste, Northern Johannesburg-based entrepreneur Himkaar Singh found a business that can save the planet. He is turning organic waste that nobody wants to deal with into a valuable resource. In the process he is helping to stop tons of trash from ending up in a dumpster. His company, called Compost Kitchen, helps South Africans divert their organic waste and turn them into an enriching compost for gardens.

The secret to his success has been thousands of earthworms that eat the waste and then poop out enriched compost. Called vermicompost it is full of nutrients and spongy enough to hold water, ideal for organic farming and your garden.

“Organic waste is the most problematic waste stream because it produces methane in the landfill and can pollute groundwater when dumped in the landfill. We have a big dream to divert all South Africa's organic waste from the landfill so that it can be properly composted, and thereby become a valuable soil conditioner.” 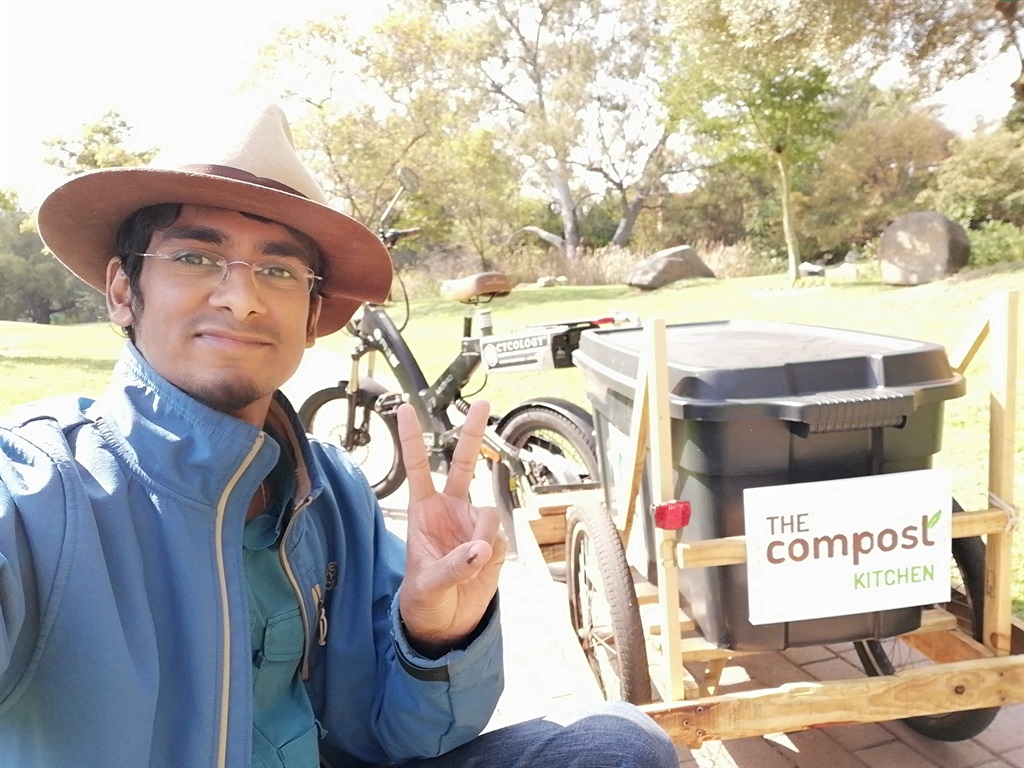 Which is why, for the past three years you would have seen Singh out on the streets of Fourways towing a trolley full of waste on a bicycle on ‘his rounds’ collecting the waste from some 350 clients - from banana peels to eggshells – to feed his army of hungry, hardworking earthworms.

“Our business was founded in 2019 with a simple purpose of putting organic matter back into soil so that the water security of South Africa can be improved. The organic matter makes the soil act like a sponge, and it is the single most impactful thing we can do if we want to prevent conflict over water in the future.”

While riding his bicycle has made an impact on the communities of Fourways, Singh believes his next big step is to use technology to help even more. His dream is to make a significant impact on reducing the 95 million tonnes of waste that South Africans send to landfill each year.

“We have an out-dated philosophy of waste management - where if I produce a banana peel, then it's the whole of society's problem to deal with it, that's why we have waste trucks and landfills. If we divert the organics away from the landfill, and compost them in an aerobic environment, the process only releases carbon dioxide which is much less potent than methane, and results in a valuable soil conditioner which is so important for the future of farming.” The device easily fits into your home. Photo supplied.

Since the business started, Compost Kitchen has realised the organic waste is 90% water, which makes it incredibly heavy for a man on a bicycle to transport. To make the system more efficient, he ultimately wants people to make their own compost from home.  But there’s a problem - it's not convenient.

“The simplest way to compost food scraps at home is to have a compost heap in the garden, but most people are looking for a solution which has no odour, no flies, no vermin, and no mess.”

Which is where their latest innovation, called the iCompost, comes in. The device is about the size of a small microwave and if you didn’t know what it was, you would swear it was just a fancy looking sour dough bin or a boujee white coffee maker. Its purpose, however, is beyond anything South Africans are used to seeing on a kitchen counter. This is because the device is a composter capable of turning your vegetable waste into compost – overnight.

“All you need to do is put your kitchen scraps into the machine every day, press START, and when you wake up in the morning you will have rich compost that you can use in your plants.”

With the capacity to take up to 2 litres (or 1 kilogram) of waste and using a small amount of electricity (0.7 kWH), it can break down waste in just 5 hours. Which is great news for the environment.

Step 1. Put all types of food waste gathered throughout the day, including coffee grounds, tea bags and egg shells.

Step 2. Press Start. In just a few hours, its odourless and low-noise technology transforms your food waste into compost.

Step 3. The result: a dry, natural and nutrient-rich soil amendment for plants, lawns and gardens

Not only is this useful for people that don’t have the space for large composting bins in their backyard, but it also has no odours associated with keeping food waste as with some traditional composting bins. The compost after. Photo supplied.

The only things that lose out on the innovation are Singh’s army of earthworms...because you use a sachet of compost activator, instead. But, don’t worry the worms have plenty to eat still.

“We didn't suddenly arrive at iCompost as a solution - it took a lifetime of observing the patterns in the world and researching the science of what's happening around us. We sat on the idea for months because we didn't have the resources to bring it to market and we weren't sure if South Africans could afford it. But during 2021 we had good growth and support from dozens of mentors, so we were able to figure out all the answers.”

In just a few years, Compost Kitchen has diverted 30 tons of food waste from landfill and given back 2.2 tons of vermicompost to their customers. The work has been recognized as one of the 300 World Best Practices on Sustainability and Innovation by the United Nations, reports news24. It was also selected as part of the Branson Centre of Entrepreneurship South Africa’s Food Waste Innovation Challenge this year.

“When I was in primary school, I learnt about how some businesses are destroying the planet, but 20 years later it is still business as usual. Businesses won’t change, but we can change business. This is the future of business, and we need more South Africans to create these solutions.”

The iCompost is currently imported into South Africa. But Singh ultimately wants to see them manufactured here in South Africa. You can pre-order them on their website until 10 January 2022.

Related Links
SA gets strict new recycling rules for plastic, paper and many other products
Tons of recalled meat are headed for public landfill sites – and that could spell an entirely new...
Meet the founder of Reefer, a South African brand that makes shoes from cork and hemp
Next on Business Insider
Old Mutual Rewards members can now get 25% off fuel – but need to work for their points