Subway commuters in Zhengzhou - the capital of central China's Henan province - were trapped in waist-deep water on Tuesday evening as heavy rains flooded the underground. Record torrential rains in the city have killed at least a dozen people, while more than 100,000 have been evacuated, reported Xinhua news.

An update from Henan's fire department on its Weibo account at about 21:00 local time on Tuesday reported all passengers as safe. It was not known how many people were trapped in the subway on line 5 of Zhengzhou's metro network, which has 148 stations.

Weibo user @guozong posted a friend's account of being stuck on the train for 3.5 hours as the waters rose. In it, she wrote: "The water rose very quickly and it was very frightening. The highest the water reached was up to my neck."

Elsewhere, more than 750 passengers were stranded for over 40 hours without food or water on a train at Tielu station near Zhengzhou, according to China National Emergency Broadcasting on Weibo.

The city of 10 million that sits along the Yellow River is experiencing its heaviest rains on record, according to state broadcaster CGTN. At one point on Tuesday, the hourly rainfall reached a record eight inches on Tuesday.

In the 72 hours between July 17 and 20, Zhengzhou saw 726 millimetres worth of rain, according to Henan's meteorological bureau. That's more than a year's worth of rain in a city with an average annual rainfall of about 635 millimetres a year. 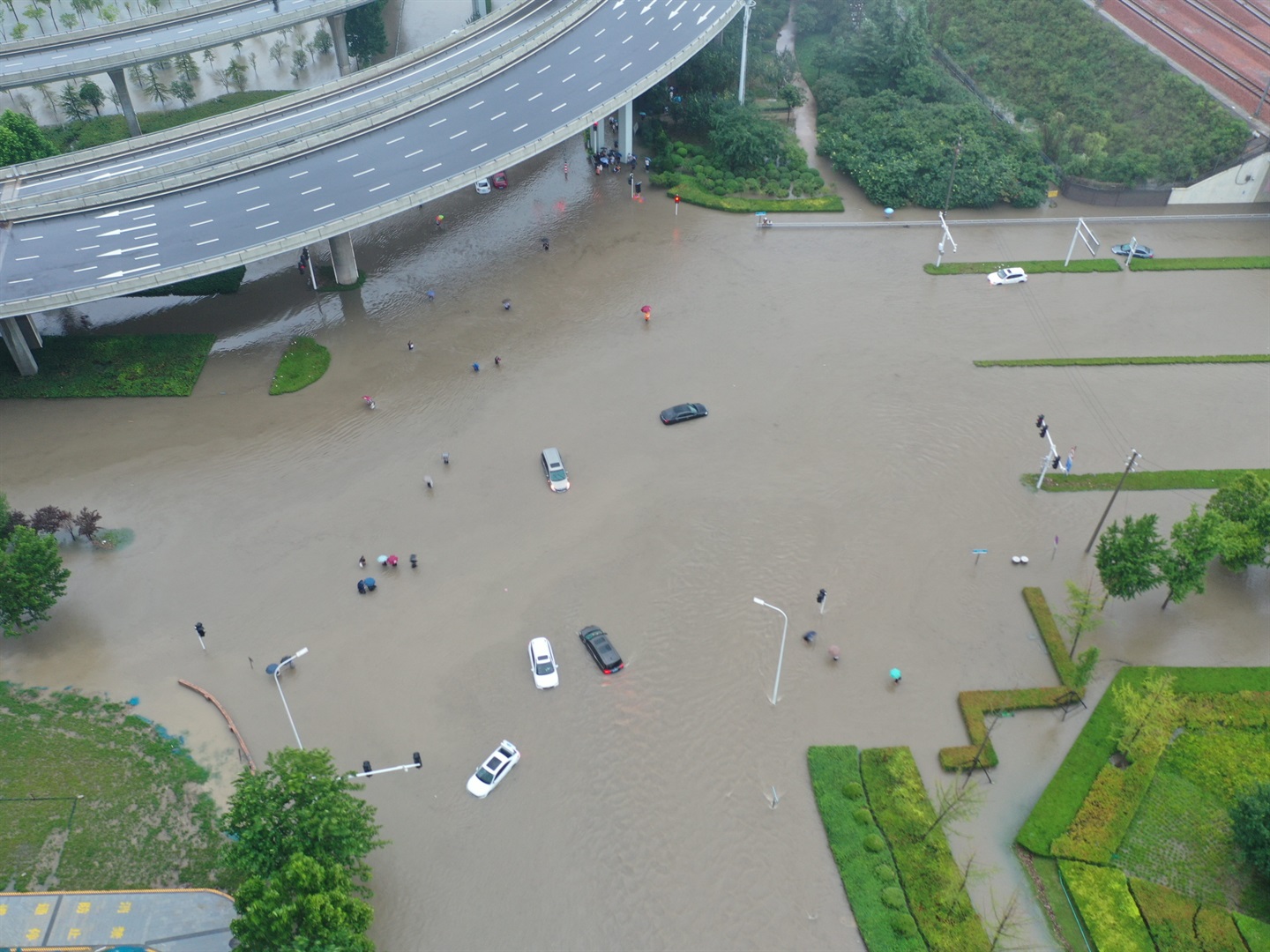 Aerial view of vehicles stranded in floodwater on July 20, 2021 in Zhengzhou, Henan Province of China.
Jiao Xiaoxiang/VCG via Getty Images

Several videos on social media captured cars fully submerged and floating down a thoroughfare. One showed a man sat in his car as muddied water gushed over his windshield.

More than 3,000 army personnel and police officers have been deployed in rescue operations around the area, according to China's People's Daily. The city has grounded all flights and stopped train operations at least until Wednesday afternoon. People look at damaged vehicles in a flooded street on July 20, 2021 in Dengfeng, Zhengzhou City, Henan Province of China.
VCG via Getty Images

Meanwhile, in another part of Henan province, the Chinese army warned on Wednesday morning that the Yihetan dam in Luoyang - a city of about 7 million - could "collapse anytime" from the heavy rains, reported Channel News Asia.